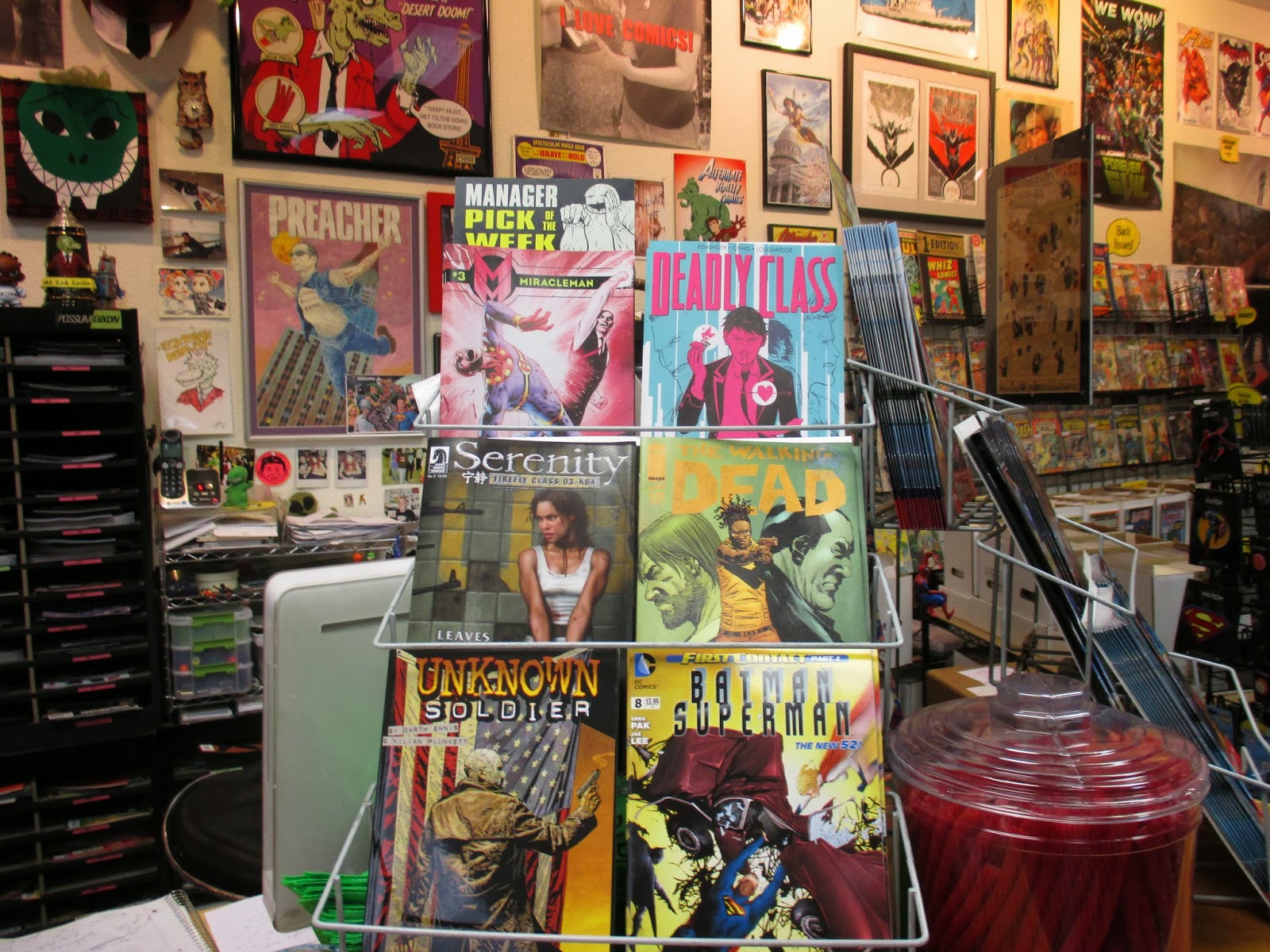 Okay, finally, with Miracleman #3, Marvel's representation of this seminal "realistic" version of Captain Marvel / Shazam, by Alan Moore is pretty much cover to cover of actual story content. The filler stuff in the first two issues are interesting in a historical perspective, but the first two issues should have had more story content. With issue #3 of Miracleman, new readers will finally get a big taste of where this is going and why it has always been regarded as one of the very best superhero epics as only Alan Moore (Mr. Thinking Outside of the Box) can do!

Garth Ennis' Unknown Soldier is back in print! Jae Lee is back for an arc on Batman and Superman and the second issues of Deadly Class (first issue was SO good, I have more first prints of that issue arriving next week from a friends store up in Portland!) and the second issue of Serenity, which picks up right after the movie, are out! 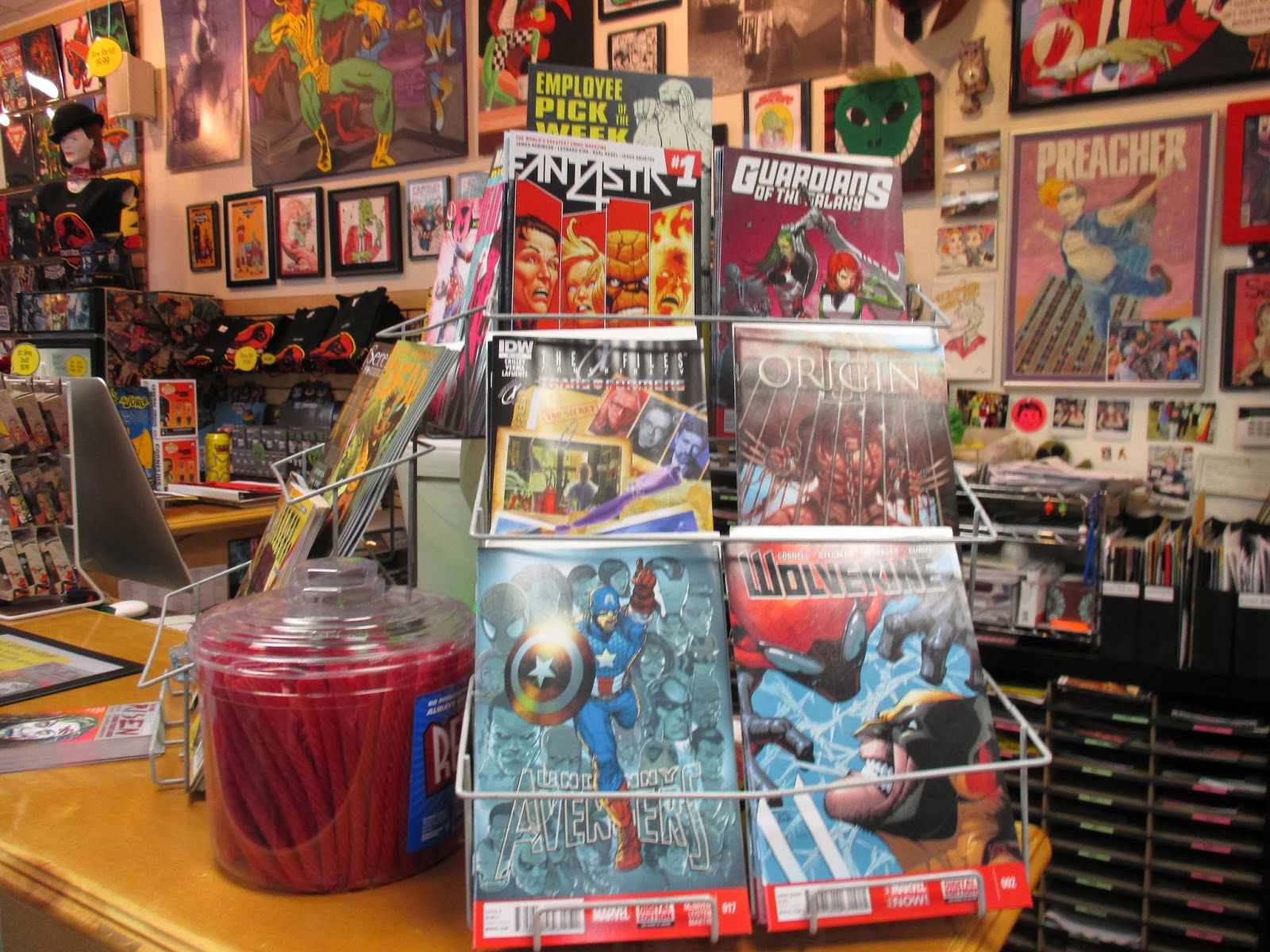 The first issue of the new Fantastic Four by James Robinson and Leonard Kirk was nothing short of FANTASTIC! Robinson, now at Marvel is two for two as his All New Invaders was also strong out of the gate. With this relaunch of Fantastic Four, Robinson shows he has respect for the past, but he's going to go in a different direction and Leonard Kirk's art couldn't be more perfect for this title (and I love their new costumes!)! 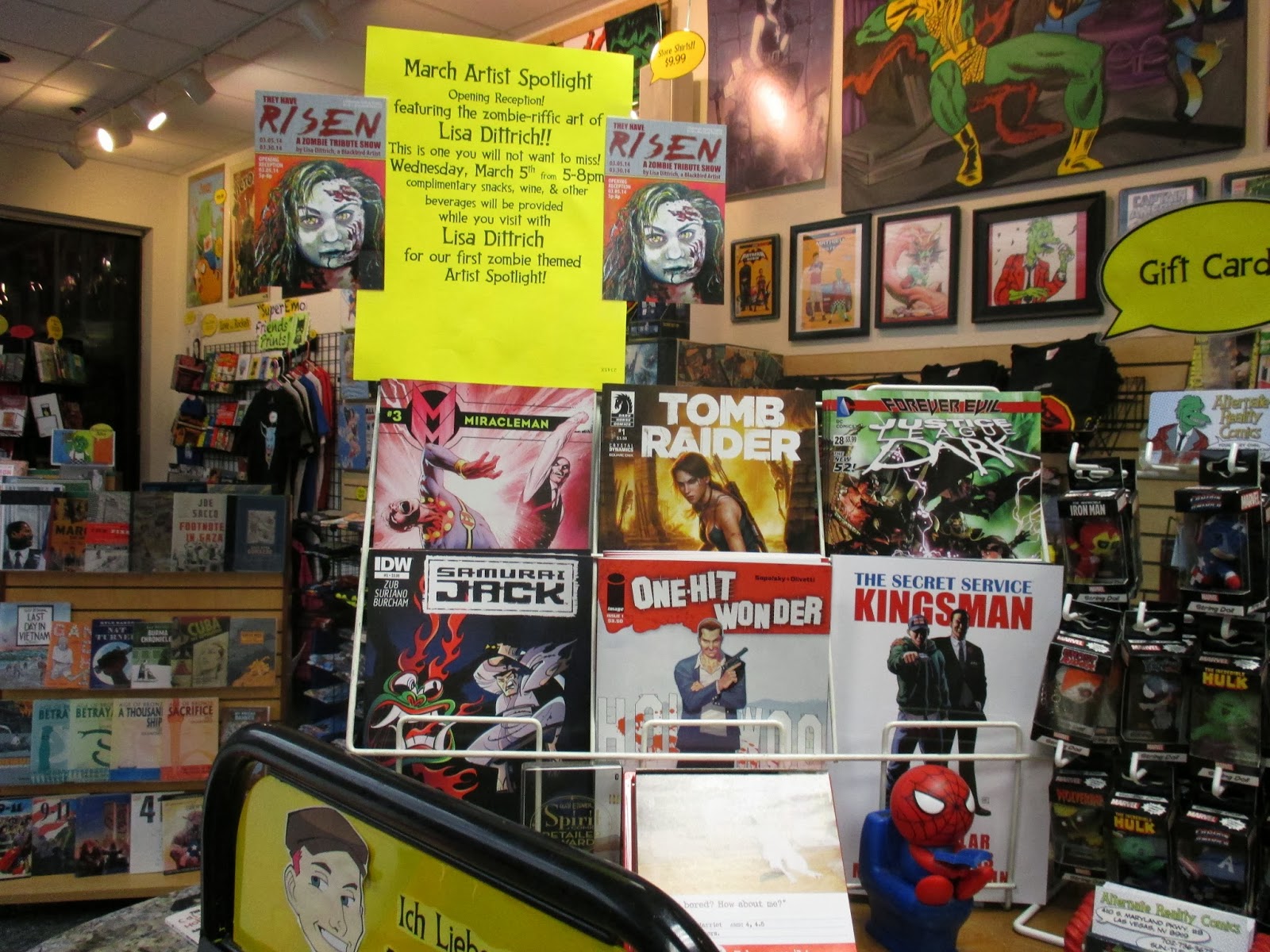 Did I already say how AWESOME Miracleman #3 is!? Well it is (grin)! Gail Simone writes Tomb Raider - how is it? - I don't know, I haven't read it yet, but I expect it will be entertaining!

See that yellow flyer with the cool zombie image above? This is another reminder about next Wednesday's Artist Spotlight Opening Reception (March 5th from 5-8pm) featuring our first zombie gallery by FANTASTIC local artist, Lisa Dittrich!

So I, (Ralph of course) will be in Atlanta through Sunday for the annual ComicsPRO retailer meeting to compare notes about the industry with fellow retailers and comic publishers, but my wonderful friends / helper bees, Michelle, Paul, and Jim, will be happy to see you all without me hogging your attentions (grin)! Seriously, Michelle, Paul, and Jim have been great friends of mine for years and anyone who knows them knows that Alternate Reality Comics will be in great hands!
at February 26, 2014 No comments: 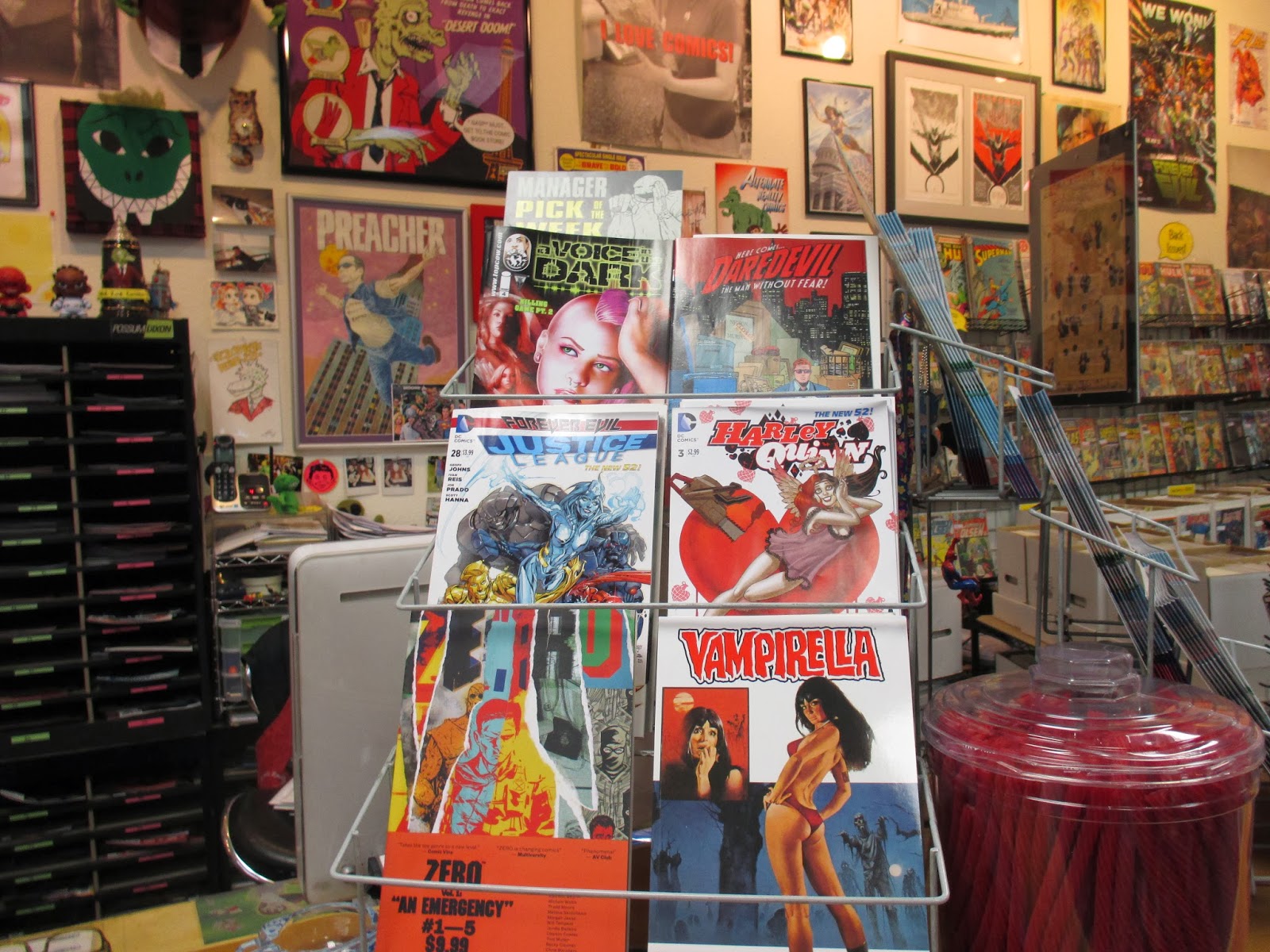 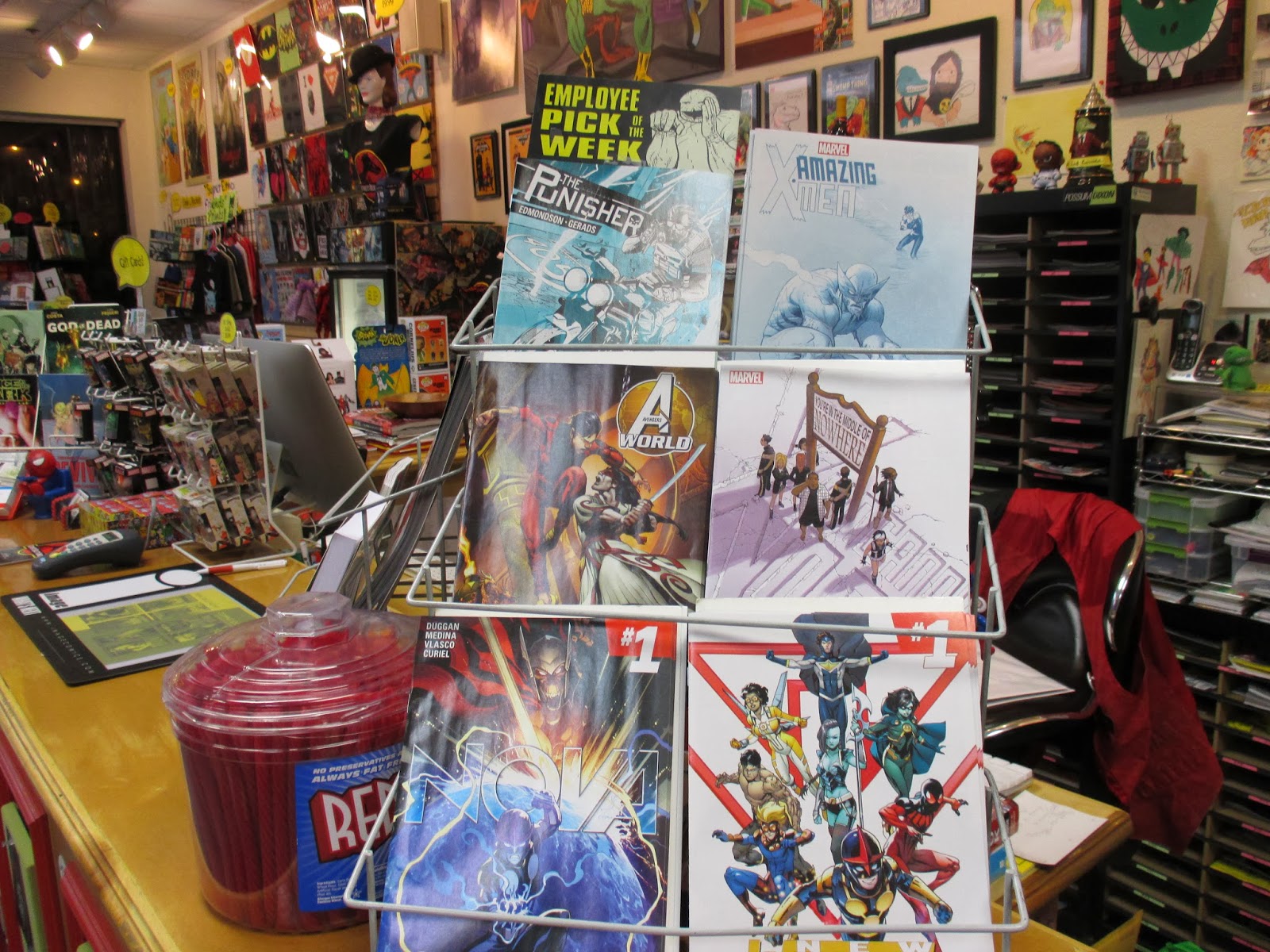 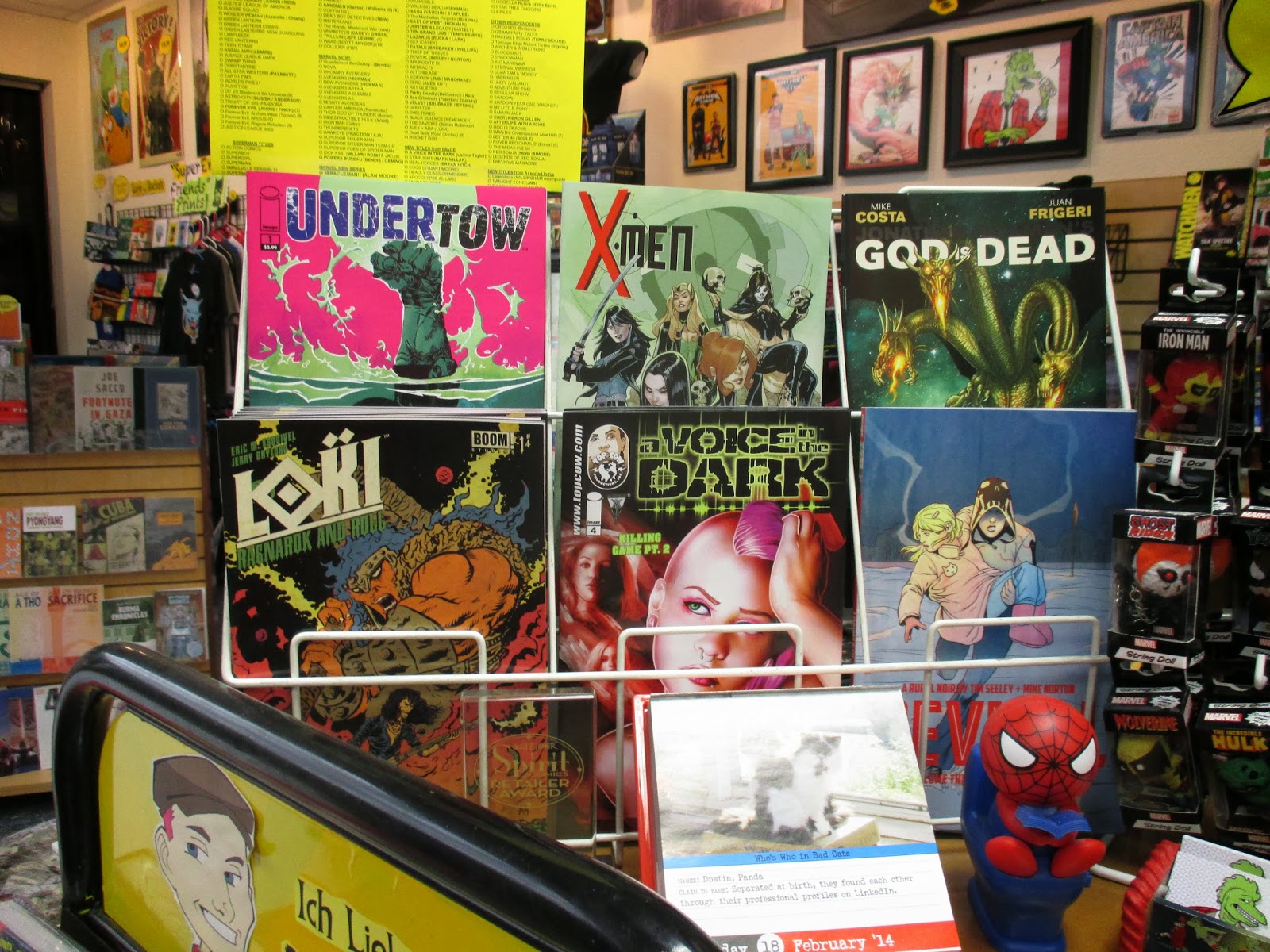 Arrrgh, I uploaded last week's New Comics Wednesday's photos, so no teaser photos of covers from this week's comics until I get to the store in about three hours! Edited to add above photos! And my favorite comics I've read this week thus far besides a Voice In The Dark are Darevil (SO GREAT) and Alex + Ada!

A good mix on new comics hits today, but the only one I've read thus far is the fourth issue of A Voice In The Dark and it's still great. Larime Taylor doesn't let up on the momentum (we also have specially priced first three issue packs for those of you who haven't tried this series yet!).

Last night my eyes were being lazy and shocked me by not feeling like reading, but here's today's comics I'm looking forward to reading: Harley Quinn, Daredevil (last issue before it gets relaunched next month as the creative team takes DD to San Francisco), Alex + Ada, White Suits, Batwoman, Animal Man, New Warriors, Batman and Two Face, Nova, Justice League, Night of the Living Deadpool, Punisher, Ghosted, Avengers World, Batman '66, Fables, and Unwritten. There's other titles out today, but those are the ones on my reading list. I'll just leave what else came out as a surprise!

Sorry this entry is so short, but I've got some reading to catch up with, so I'll see my fellow comic book enthusiasts at the Alternate (Reality Comics, that is - grin)! 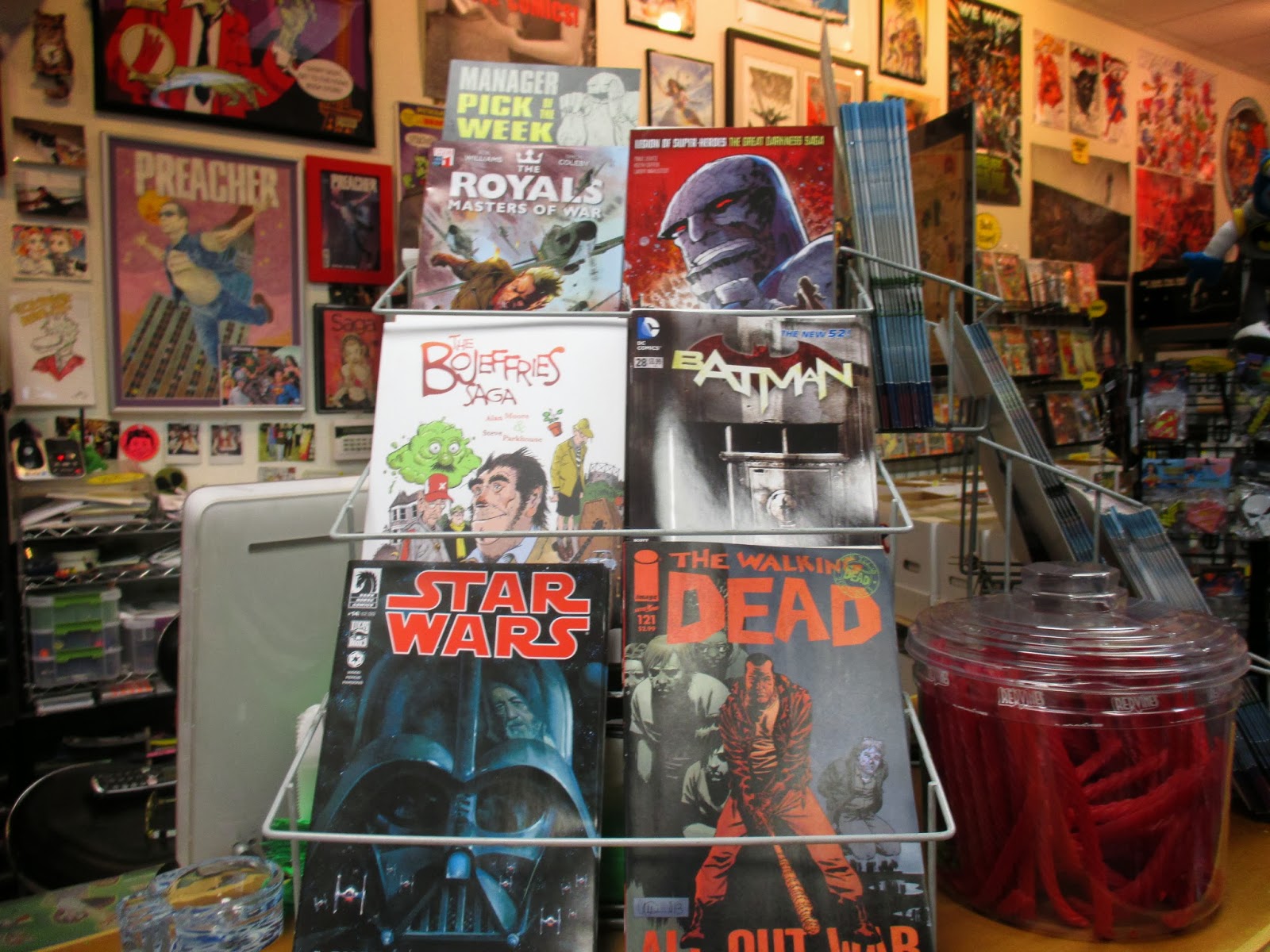 Within these three photos are just some of the fabulous comics out today that want to be your friend! I need to get to reading them, so I apologize for my lack of words here this week! Hope to see many of you at the Alternate today! 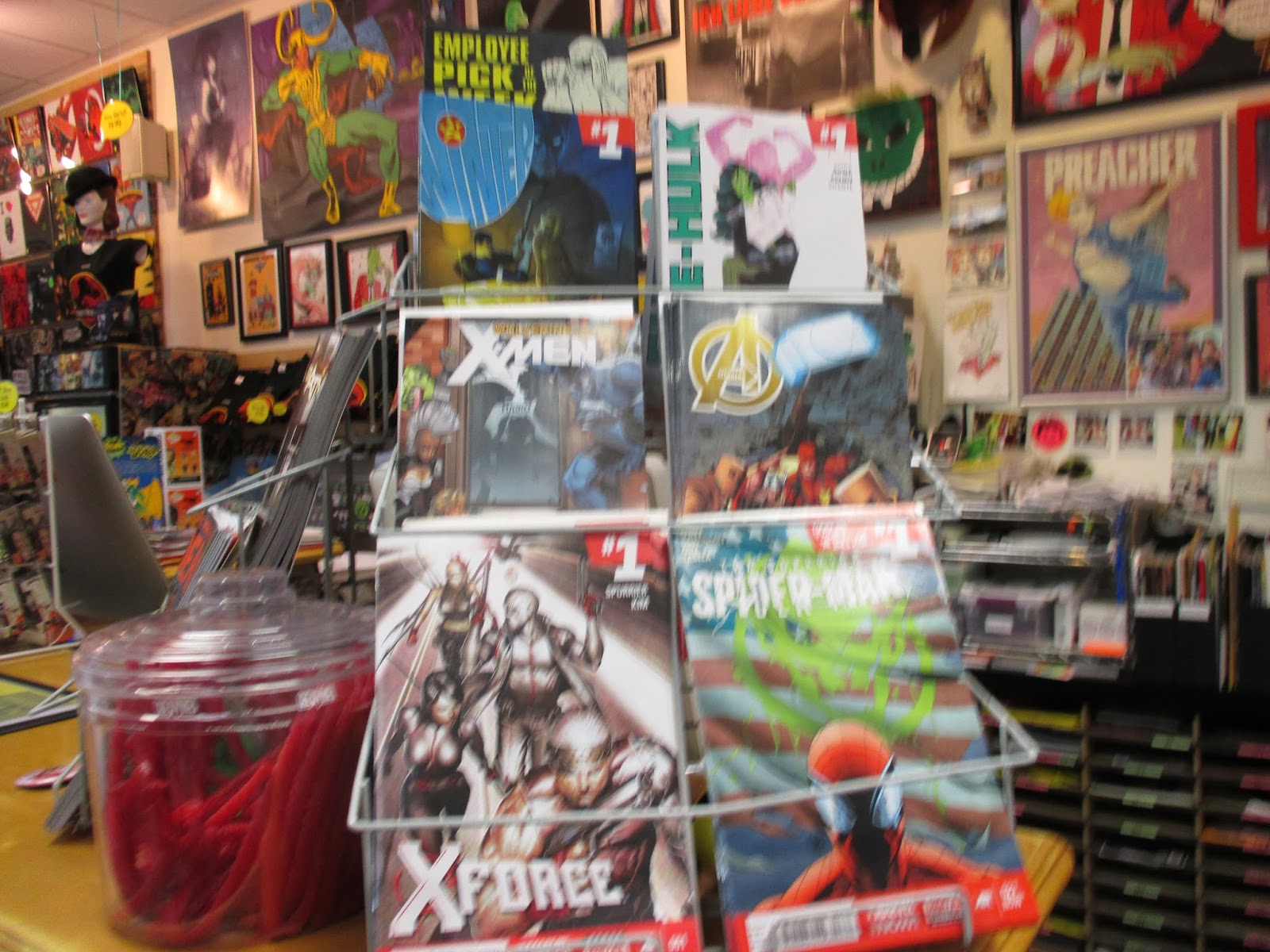 The above comics aren't blurry in person! 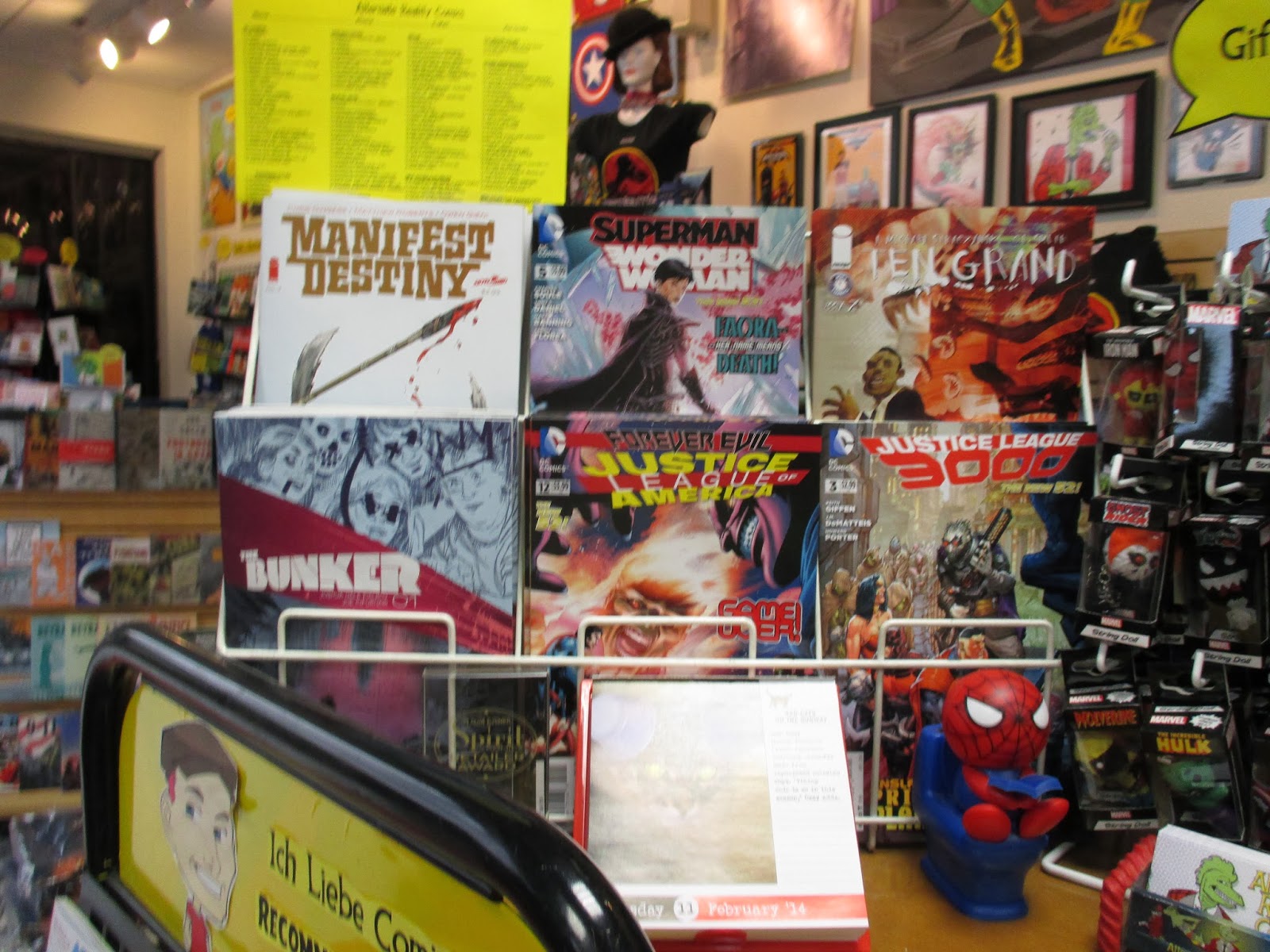 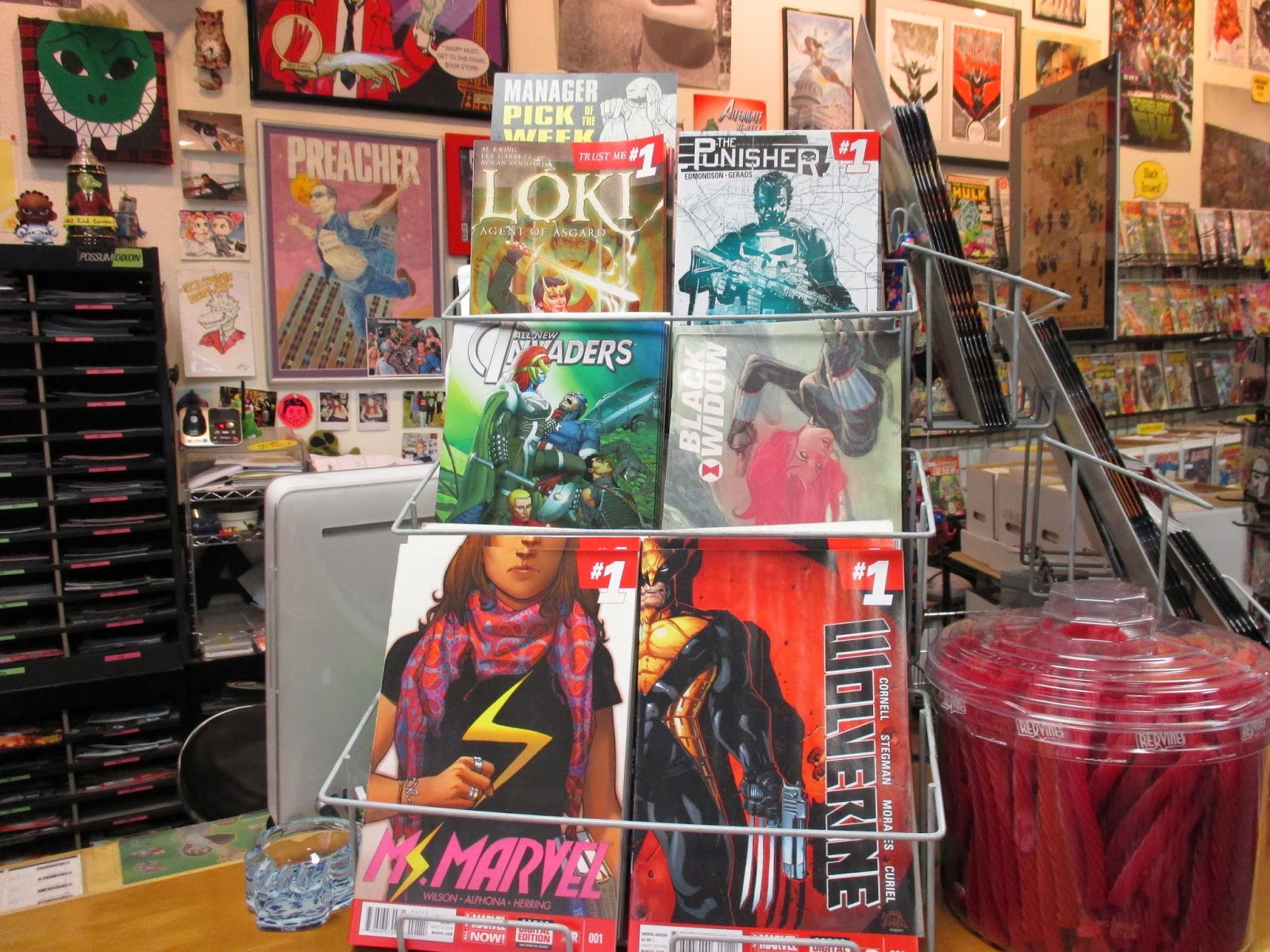 As you can see in the photo above, today we've got four new Marvel titles debuting, which makes for great jumping on points to see what these new creative teams do with these characters. First a note though about this afternoon / evening special guest from 5-8pm at Alternate Reality Comics:

Alternate Reality Comics has been wanting to have an Artist Spotlight focusing on one of Vegas' best kept artistic secrets, Deryl Skelton, for a long time, well that day is upon us! Deryl Skelton had worked in the comic book industry for years, primarily on Star Trek The Next Generation, but he's drawn everything from Guardians of the Galaxy, Silver Surfer, Wonder Woman, Infinity Guantlet, & What If, to chapters in Tales From Fremont Street & Tales From the Boneyard! He's also done editorial, caricature, &advertising cartooning, basically if it's art related, he's done it (and there's probably not a comic book character he hasn't drawn)! At his opening reception from 5-8pm, Wednesday, Feb. 5th, Deryl will have original art and prints of his art on display & for purchase at great prices (he could probably be talked into doing a commission too, just not during the opening)! We'll have complimentary snacks, soda, & wine for you to enjoy while you marvel at Deryl's art & visit with him and fellow art lovers! One of his pieces at this show can be seen in the photo at the end of this blog entry!

Looking for something different in your caped / costumed entertainment? Well I'm thinking this week's Loki Agent of Asgard and a brand new gal as the new Ms. Marvel should be just what you're thinking of! The new Punisher series by Nathan Edmondson  is off to a very strong start and we get a new, curious direction in Wolverine #1, by Paul Cornell. The second issue issue of James Robinson & Steve Pugh's All New Invaders definitely continues the momentum they established in the first issue! 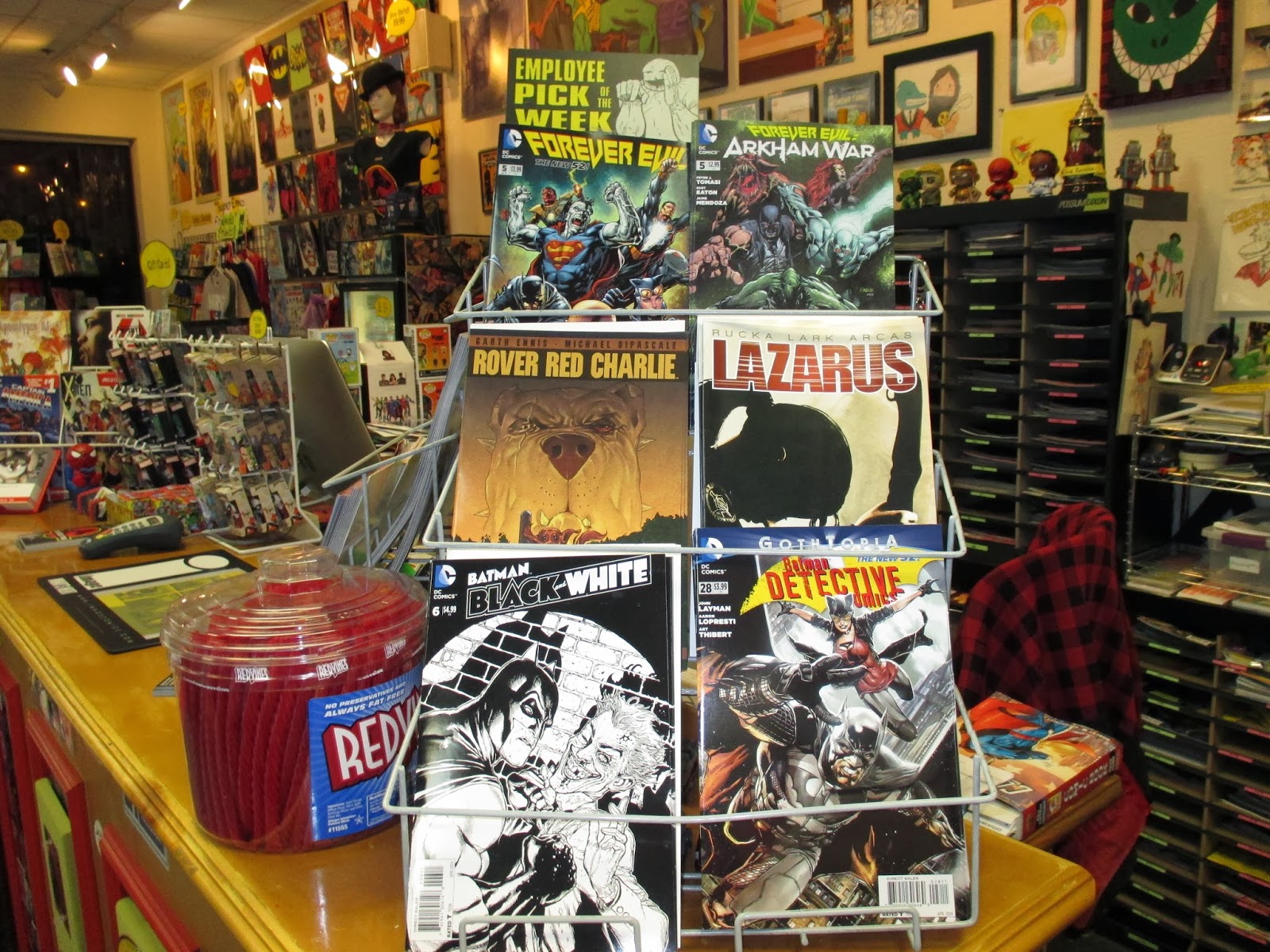 Forever Evil the fifth - seems like it's been a while, right? Well that's because it has been about six weeks since the fourth issue, but it's here so fret not! Comics I especially can't wait to read, but haven't gotten to as I write this, Red Rover Charlie and Lazarus! Look at that Batman Black and White cover, that's worth the ticket price for the issue without even having peeked at what's within! 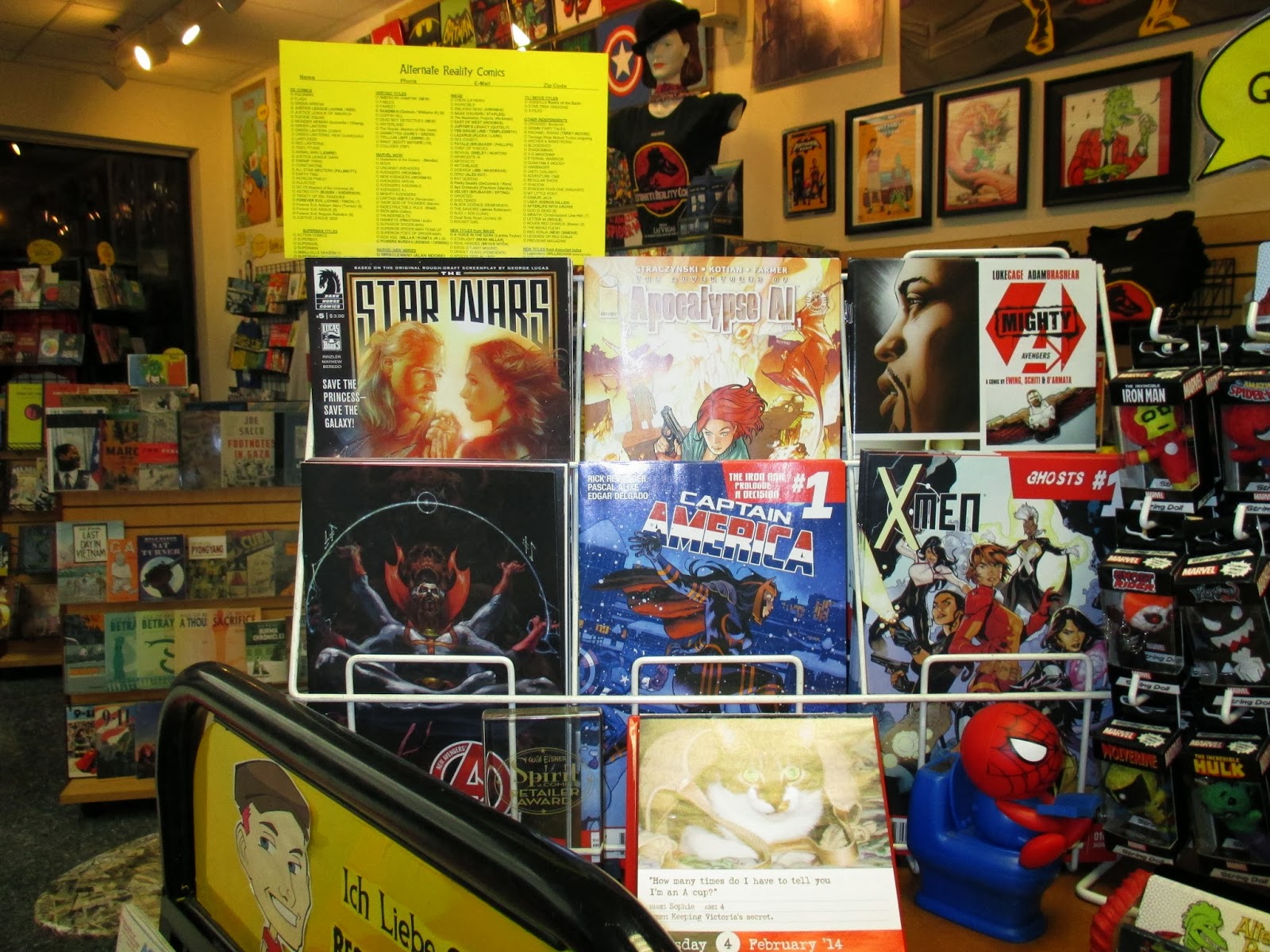 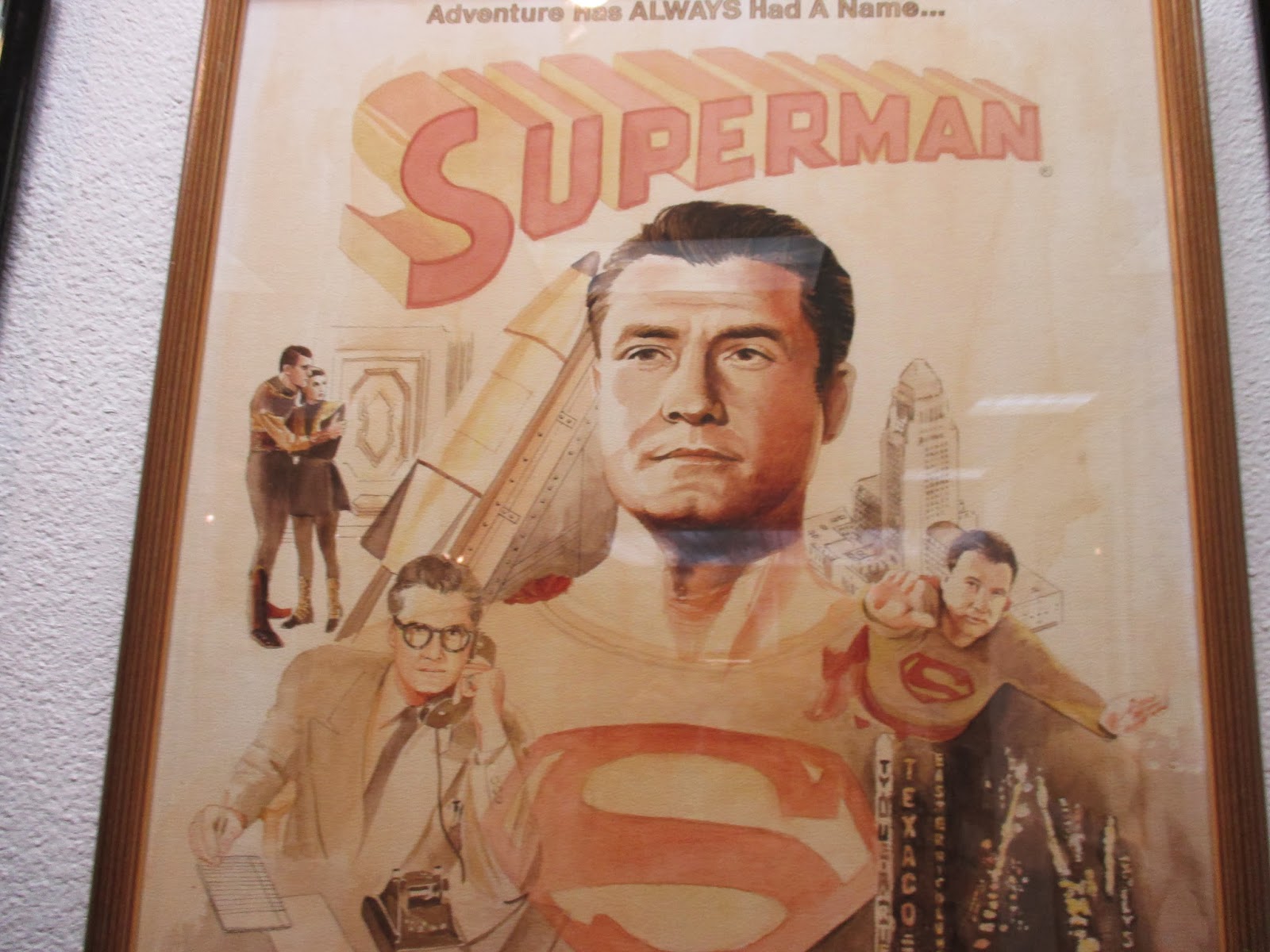 ...an incredible painting of George Reeves, who played Superman in the Adventures of Superman television show of the 1950s! This is just one of the many fabulous pieces of Deryl Skeleton's art that is on display at his opening reception tonight from 5-8pm! Bring anyone you know, even people you don't know, they'll thank you profusely for having done so!
at February 04, 2014 No comments: