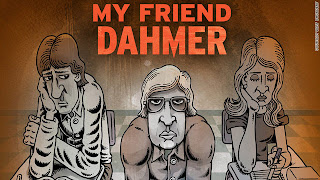 My Friend Dahmer is the new graphic novel expansion of his 2004 comic of the same name by cartoonist Derf Backderf. 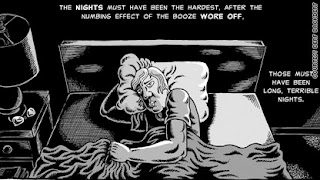 Derf's previous graphic novel, Trailer Parks and Punk Rock, from 2010, was about the music scene out of Ohio and trailer parks, just like the title states. Similarily, My Friend Dahmer, is about what it sounds like, except although Derf went to high school with serial killer Jeffrey Dahmer, he (and others) wasn't a close friend of his, rather he (Dahmer) was a big part of their high school pranks and goof offs. My Friend Dahmer isn't a sensationalistic account of how someone becomes a serial killer, but it is an engrossing look at how an outcast from a troubled family life can go on to do the horrific killings Jeffrey Dahmer went on to do between 1978 through 1991.
at March 26, 2012 1 comment: 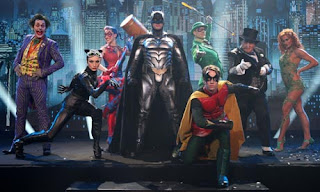 This October, Batman Live! is coming to fabulous Las Vegas! Check out their site:http://www.batmanlive.com/home.php for more info and a REALLY cool video! 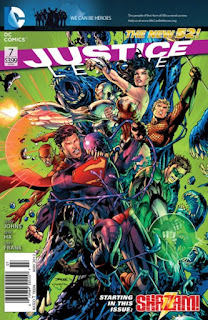 Tomorrow morning (6:15am), Wednesday, on KLAS-CBS, writer Geoff Johns and artist Jim Lee of the Justice League (also CEO's of DC Entertainment) will be talking about Batman Live! and other exciting upcoming DC news! How exciting is this!?!
at March 20, 2012 No comments: 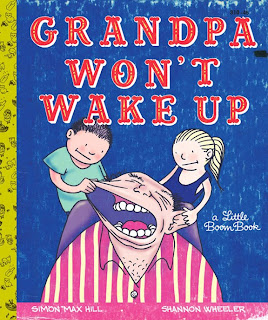 Grandpa Won't Wake Up is the newest cartoon book by Shannon Wheeler (of Too Much Coffee Man fame) and is a nice hardcover book published by Boom! Town in a format that evokes the little big books of yesteryear. 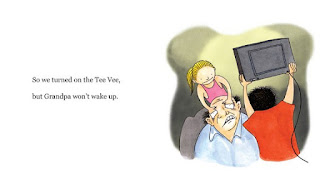 See this little cartoon here? This and the title of Grandpa Won't Wake Up is exactly what this book is about, but despite how this may look, it's probably not intended for little kids unless they have a really odd sense of humor!
at March 14, 2012 2 comments: 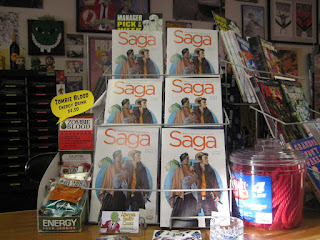 Brian K. Vaughan is most known to discriminating comic book readers for his Y The Last Man and Ex Machina (he also did Runaways and Doctor Strange The Oath for Marvel). Today, with artist Fiona Staples, Vaughan debuts his new series, Saga, at Image, and it's going to be one of the most talked about, anticipated comics of the year!

Saga's three central characters are right here on the cover, with the first issue being narrated by Hazel (the daughter), from the future. This is a story about two people who reject their appointed roles in a planetary war, who fell in love and are just trying to find a peaceful place to raise their daughter. Brian K. Vaughan is a master at page-turning, cliff-hanger comics, with great characters and with artist Fiona Staples, we finally get another regular dose (Vaughan hasn't written a comic in years) and I'm sure that everyone will be on the edge of their seats awaiting each issue of Saga!
at March 14, 2012 2 comments:

Thanks Moebius for all the great art! 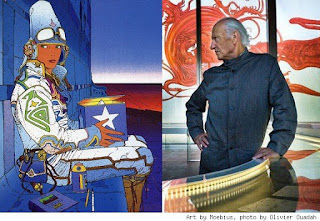 After a long illness, Jean Giraud (Moebius), has left this mortal realm, but with the extensive body of artwork he drew over his looooong career, he is immortal. This is amongst my favorite pieces of art by Moebius, but his style was really amongst the most unique that the sequential art medium has ever seen so I could have easily chosen any number of his creations to spotlight here.
at March 10, 2012 No comments: 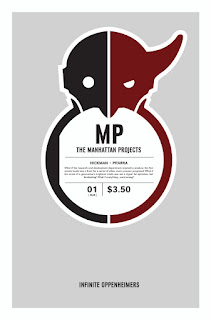 Tomorrow, Wednesday, March 7th, sees the arrival of two new Image titles, The Manhattan Projects and Hell Yeah. Having just read both of these, I'm here to tell Ich Liebe Comics! readers that these are going to be titles that you're going to want to check out. 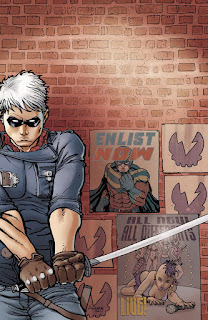 MP The Manhattan Projects, is written by Mr. Think Outside of the Box himself, Jonathan Hickman (Fantastic Four, Nightly News, Red Mass For Mars, Red Wing) and drawn by Nick Pitarra (Red Wing). This comic has as its main characters, Robert Oppenheimer and Albert Einstein, but not as you know them from whichever history account you've been exposed to. This was a great first issue that will make you want to pick up the following issues. 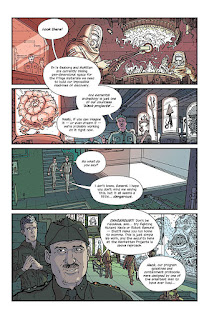 Hell Yeah is written by Joe Keatinge (Glory) and drawn by Andre Szymanowicz. The sound bite capsule summation of what Hell Yeah is, is that it shares a tone with Kick Ass and is another one of the recent comics that takes superheroes to the next level, along the lines with what Warren Ellis does when he writes new superhero comics like No Hero and Supergod (which are both excellent). After you read Hell Yeah, I'm sure you'll be back for the next issues.

I know I'm going to be sold out of both of these titles before New Comics Wednesday is over. Do I not know how to order comics!? I wouldn't say that's true (I've been doing this for 18 wonderful years now), but with fast recent sell outs of new series like Prophet, Sacrifice, Scam, Thief of Thieves, Fatale, and some others that I'm sure I'm forgetting here at my store the last few months, I'm beginning to wonder what's in the water that the creators of these books are drinking (something good, that's for sure).

More importantly to me and customers of Alternate Reality Comics, is how can I better order these books than I am presently? I'm not just ordering a handful of these titles, but at the same time, I'm not ordering long boxes of them. What's happening is a week or so (mostly days before) these titles go on sale, the buzz starts hitting about how good these books are and this happens after I've placed orders for the books, so myself and comic stores everywhere get people signing up for the titles absorbing what we'd ordered, leaving us with not much for the shelves. In a perfect world I'd get to read comics like The Manhattan Projects, Hell Yeah, and Thief of Thieves as I place my order and then I'd know that these titles would be VERY easy to sell and order BIG upfront. I realize people want to actually look at a new comic series when it hits the store before committing to any given title, especially with the multitude of choices that there are on display in the newest Previews, but the reality is also that comic stores can't just order lots of every new title in the hopes that they all are as good as the above mentioned new titles are because if several of them turn out to be duds, a lot of unsold books can spell trouble for a comic store. Anyway, I guess this is what second prints and trade paperback collections are for, I just wanted to shed a behind-the scenes perspective on the recent new title sell-outs that has been happening at comic stores everywhere.

Before I sign off this entry, I want to give a shout out to another recent new series by Jonathan Luna and Image called Whispers (of which I'm sold out of the first issue, but should be getting more), it's one of the BEST first issues (this and Thief Of Thieves, which I'm getting more first prints of this week) I've read in a long time and I don't know why I haven't heard as much buzz about this title as some of the others here. Also look out for Brian K. Vaughan and Fiona Staples' Saga next Wednesday (March 14th), this is sure to be a money back guarantee title and I'll have LOTS of that title guaranteed (because it's written by the writer creator of Y The Last Man and Ex Machina so you know it'll be great)!
at March 06, 2012 2 comments: 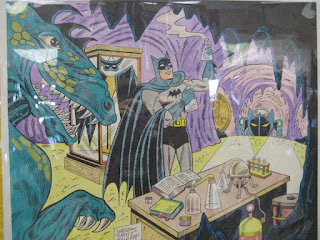 Sad news for people who love great comic book art, Golden Age comic book artist, Sheldon Moldoff, has died. At the age of 91, he was the last surviving artist who drew Batman during the Golden Age. Besides Batman, he also drew many landmark first stories and covers for characters such as Hawkman and Hawkgirl and Green Lantern, as well as co-creating Batwoman, Ace The Bathound, and Bat-Mite.

This piece of art featuring Batman in his Batcave, is an original I bought from Sheldon Moldoff back in 1998 at the San Diego Comic-Con. I bought this piece because I've loved Sheldon Moldoff's art even before I knew that art was drawn by him (many artists were uncredited in the early days of comic books), but I also bought this piece because it shows Batman being a scientist (remember that episode of The Simpsons in which Homer randomly says "Batman's a scientist."?) 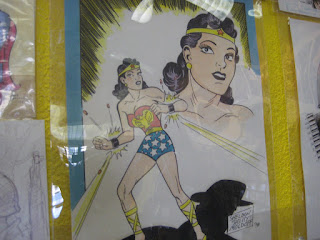 This is a Sheldon Moldoff original of Wonder Woman I bought from him at the 1998 San Diego Comic-Con. Actually, Sheldon Moldoff first started going to the San Diego Comic-Con as a guest when Las Vegan uber fan David Siegel contacted him and told him that fans would love to meet him (Sheldon Moldoff was the first Golden Age artist that David Siegel got to go to the San Diego as part of his networking / giving back to comic book greats, as there wasn't comic book conventions before 1970). Thanks for all of the great art and entertainment, Sheldon.
at March 03, 2012 No comments: