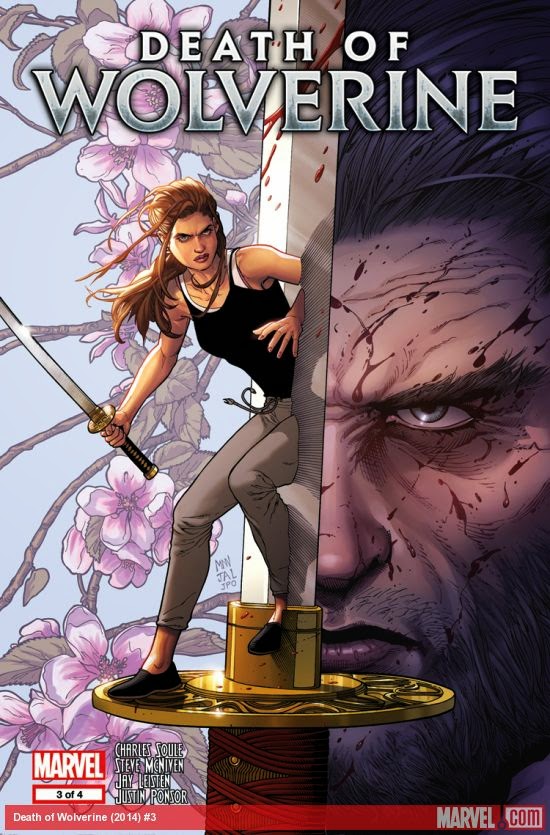 We should have the entire shipment processed as close as possible at 11am Wednesday (we didn't get our shipment on Tuesday as we were supposed to - arrrgggh!) - call first if you were going to come earlier! Details of our BIG, exciting, Artist Spotlight Opening Reception below!

Wolverine in one issue closer to dying!! Thor is now a woman, no there wasn't a sex change (grin)! Who is this new character!? 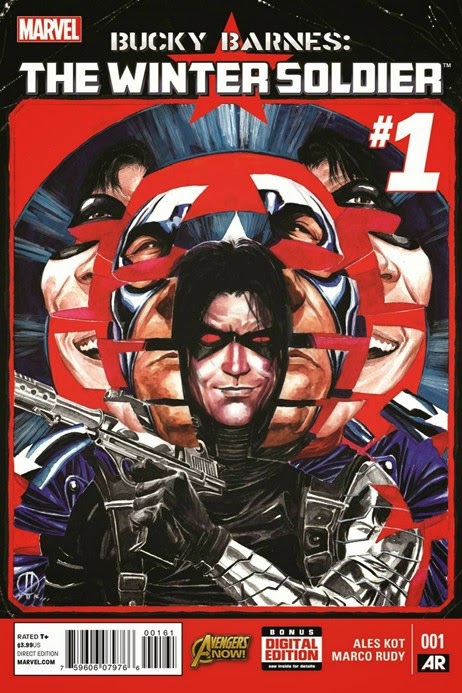 A whole new status quo for Bucky that was set up at the end of Original Sin #8 (I'm going to guess that you can jump onto this first issue even if you haven't read that though)! Can't wait to salivate over Marco Rudy's art! 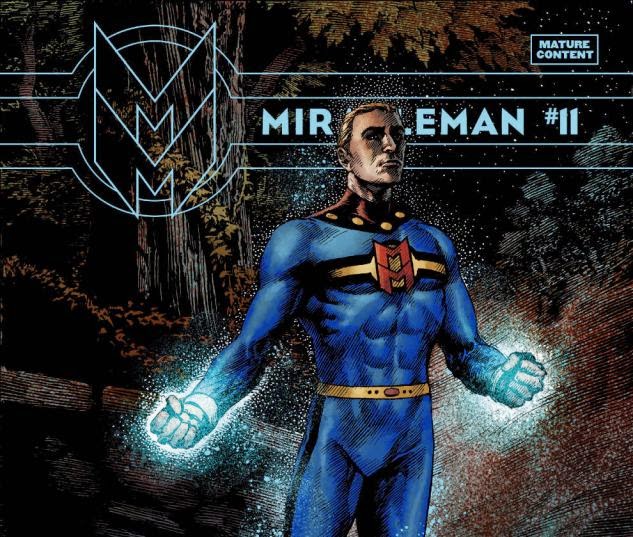 Miracleman #1-10 were great, taking the superhero concept to an entirely new level, but it's this third book of Miracleman issues #11- #16, GORGEOUSLY illustrated by John Totleben, that really made Miracleman the seminal comic it is! Can't wait to see the new colors on Totleben's art! 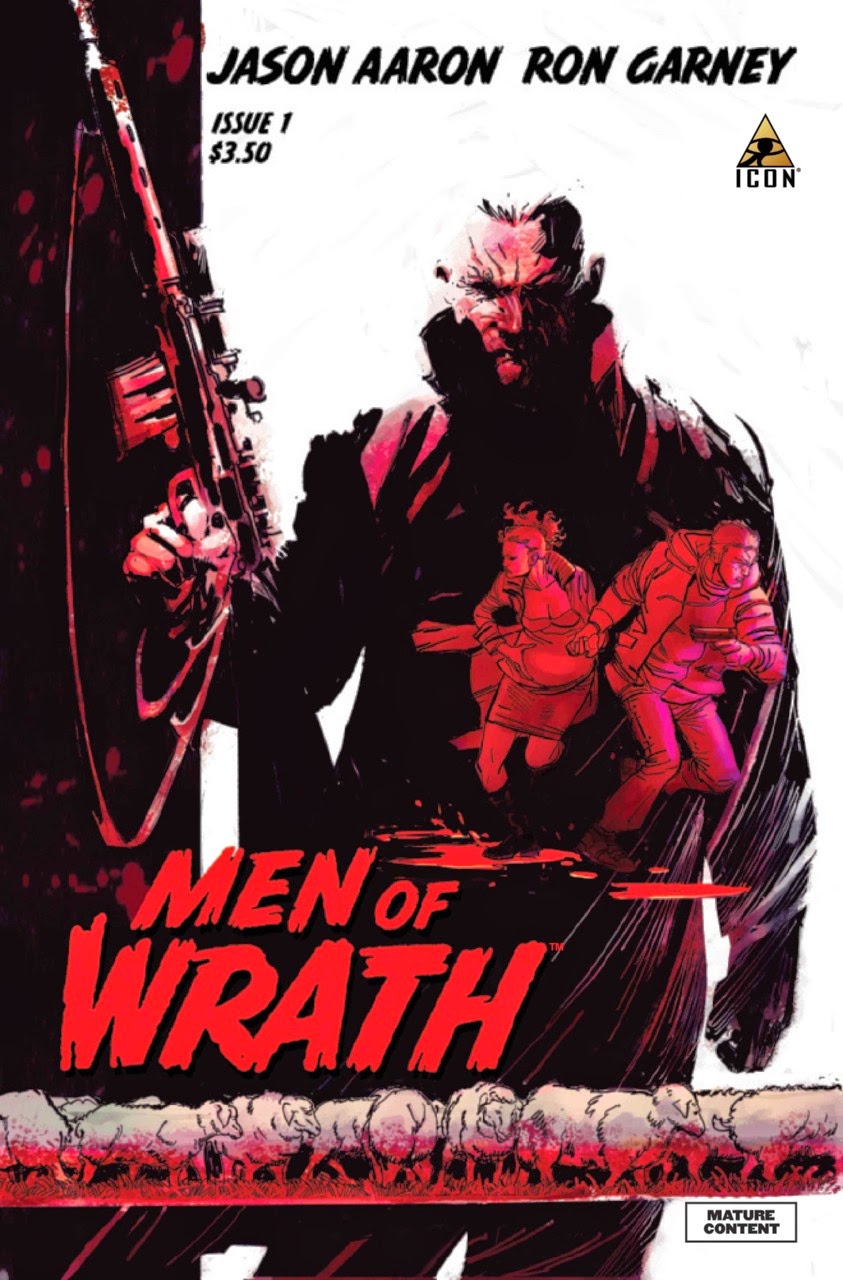 If you're looking for another Southern Bastards hard edged comic written by Jason Aaron, I'm sure his new creator owned, Men of Wrath (illustrated by Ron Garney) will be your ticket! 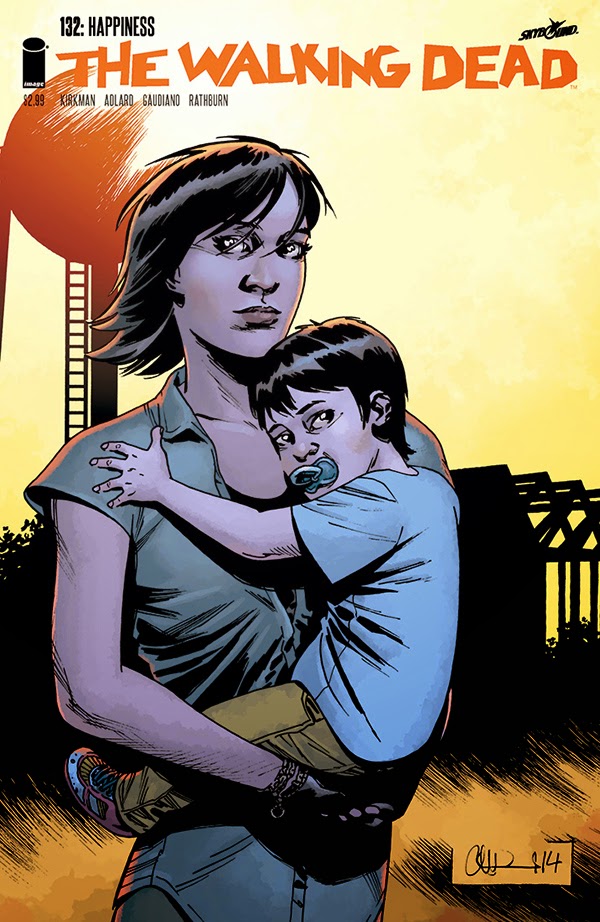 Walking Dead! Will we find out about.... (I'm not going to say, because firstly I haven't read this issue yet, and secondly, I don't want to spoil what we may find out about in this issue)!

Alternate Reality Comics is happy to announce that our October Artist Spotlight is FANTASTIC local artist, James Bousema! Opening Reception is Wednesday, Oct. 1st from 5-8pm! We hope a lot of you can make it and lavish ego strokes to James Bousema in person regarding how awesome his art is! complimentary snacks, beverages, and wine will also be part of the opening!

James Bousema, has been creating art all of his life. An artist with the heart of a geek, James has never been afraid to put his influences into his work whether they stem from Saturday morning cartoons, comic books, or ancient mythology. He graduated the University of Nevada Las Vegas as a Drawing and Painting major in the Spring of 2013 and currently works as a Graphic Designer / Illustrator and Freelance Artist.

Please spread the word and bring your friends and neighbors for great local art and a great time!
at September 30, 2014 No comments: 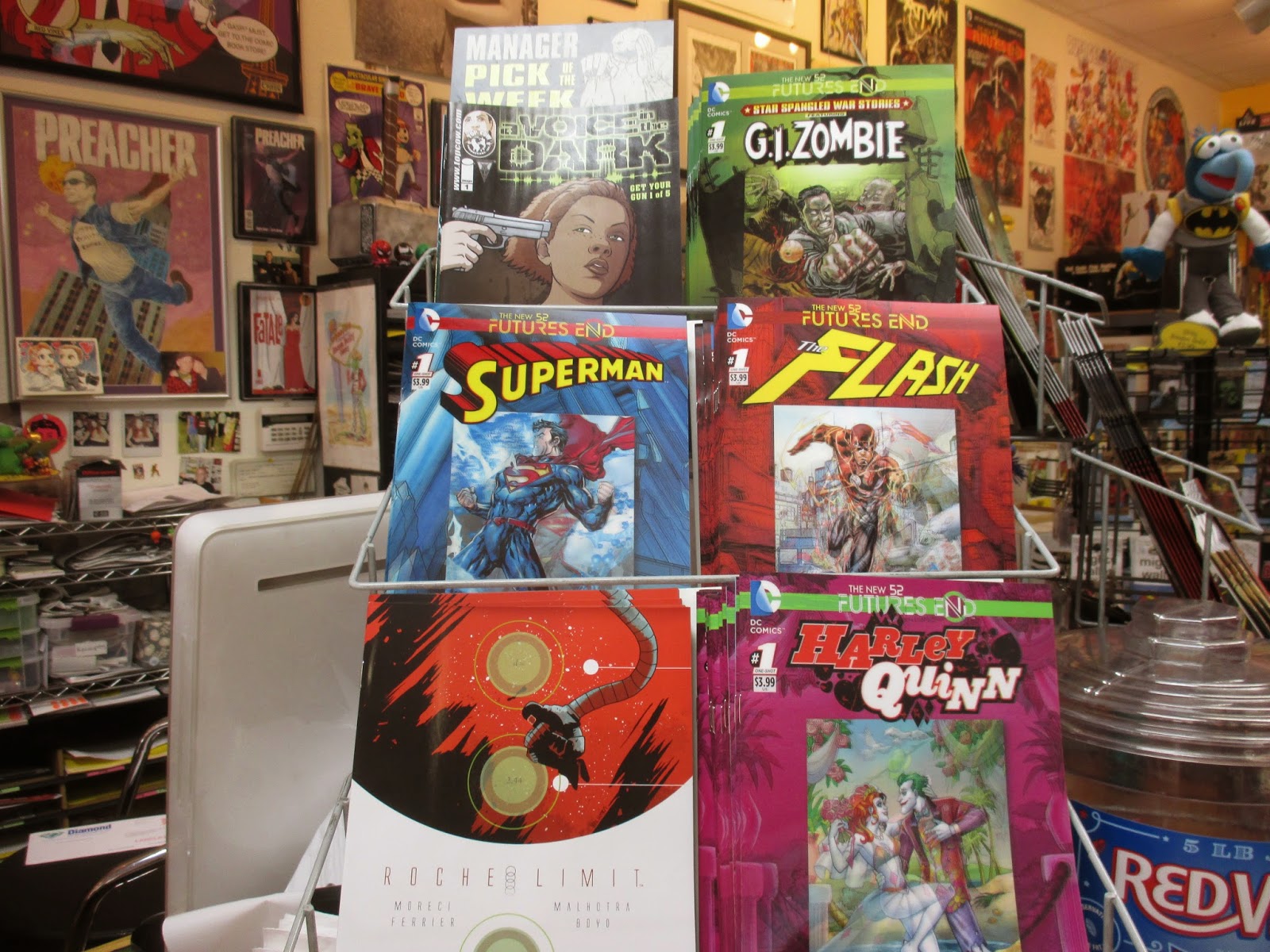 A Voice In The dark, written and drawn by Larime Taylor (who everyone knows lives in Vegas, right!?) is now in gorgeous color by another Las Vegan artist, Jay Savage! New Image siers, Roche Limit looks pretty wild! 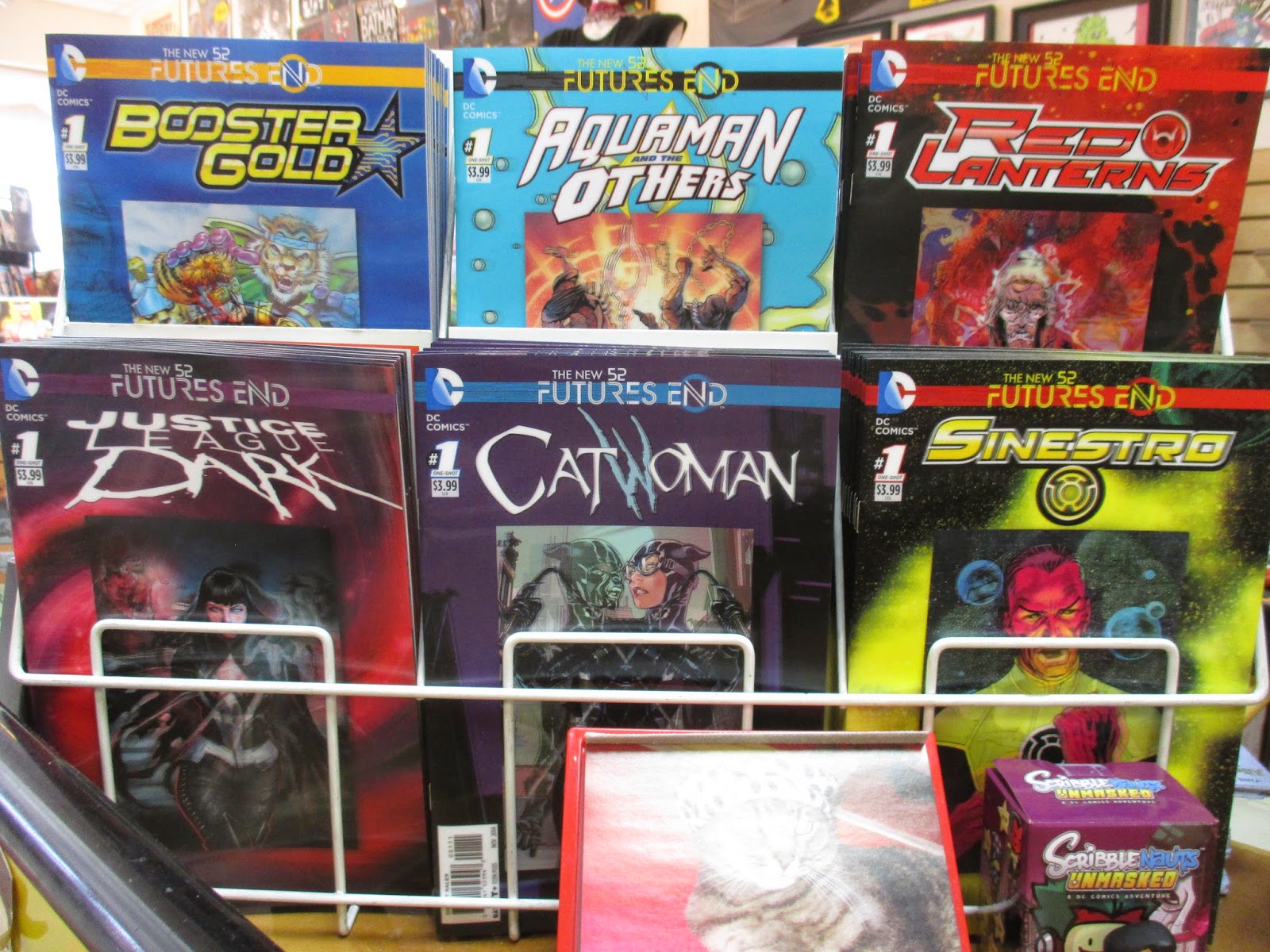 Booster Gold is back! 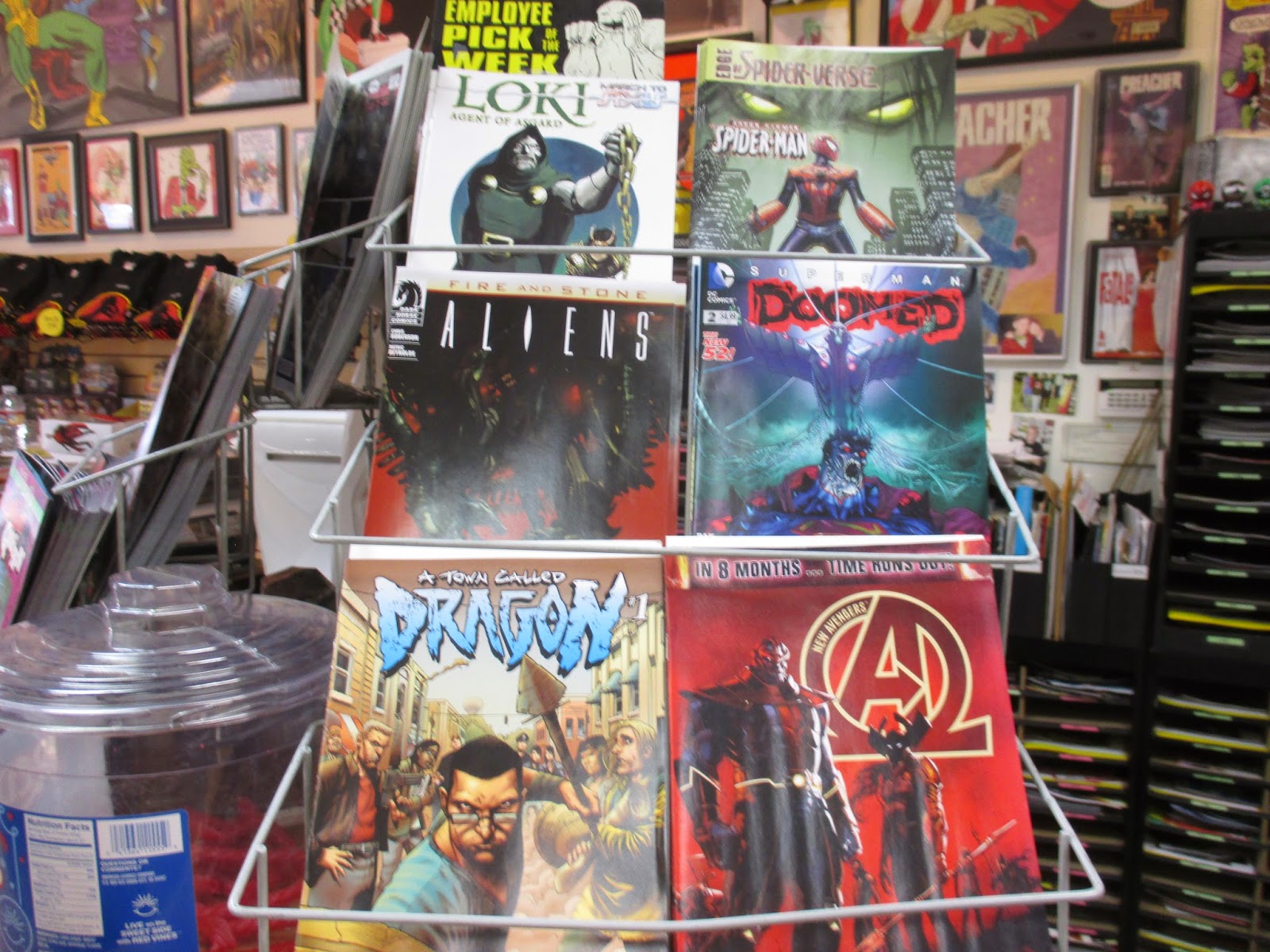 Loki is back after a few months absence! Third chapte of Edge of Spiderverse!
at September 24, 2014 No comments: 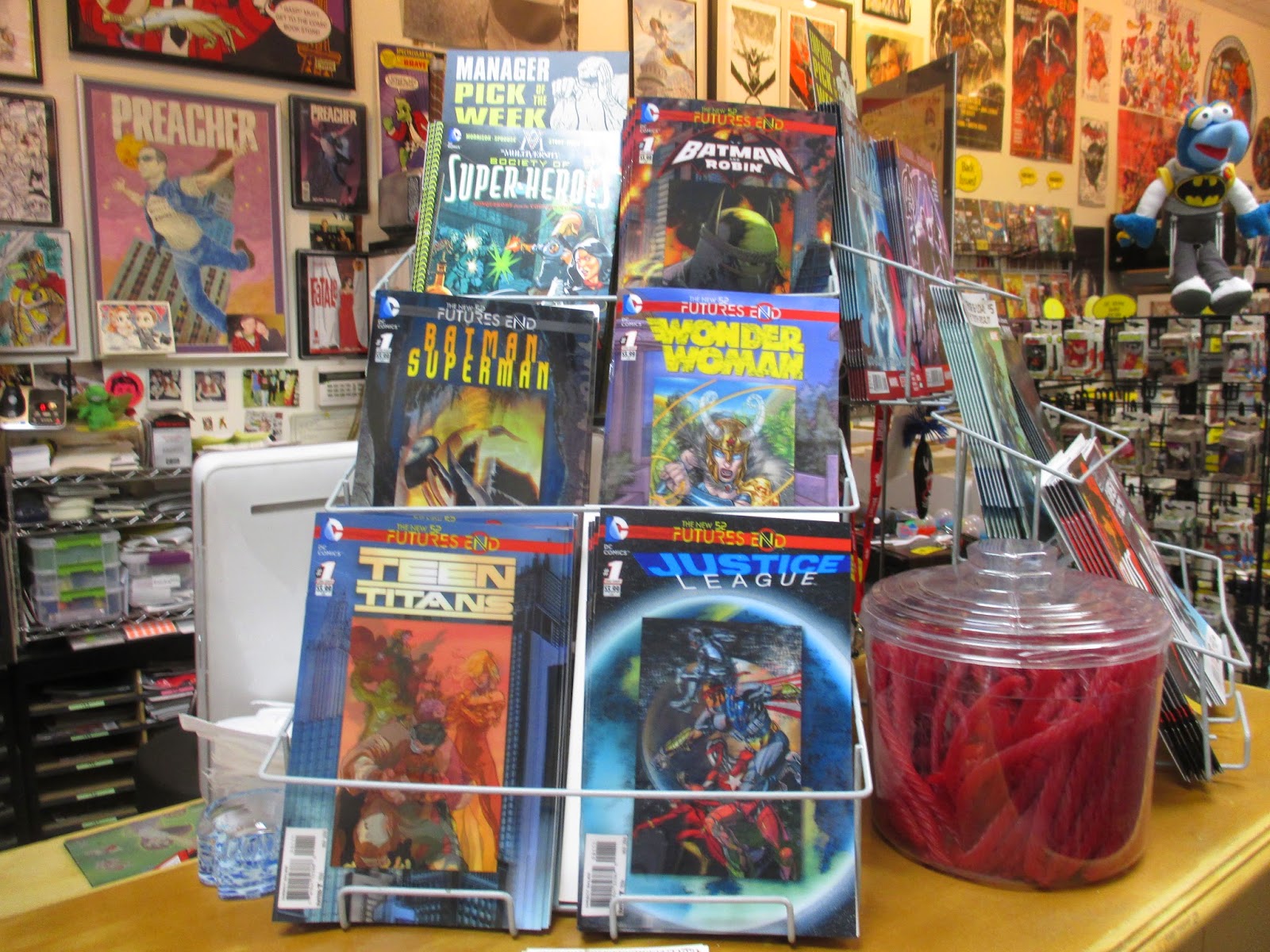 Second issue of Multiversity with art by Chris Sprouse! Third round of DC's 3D one shots! 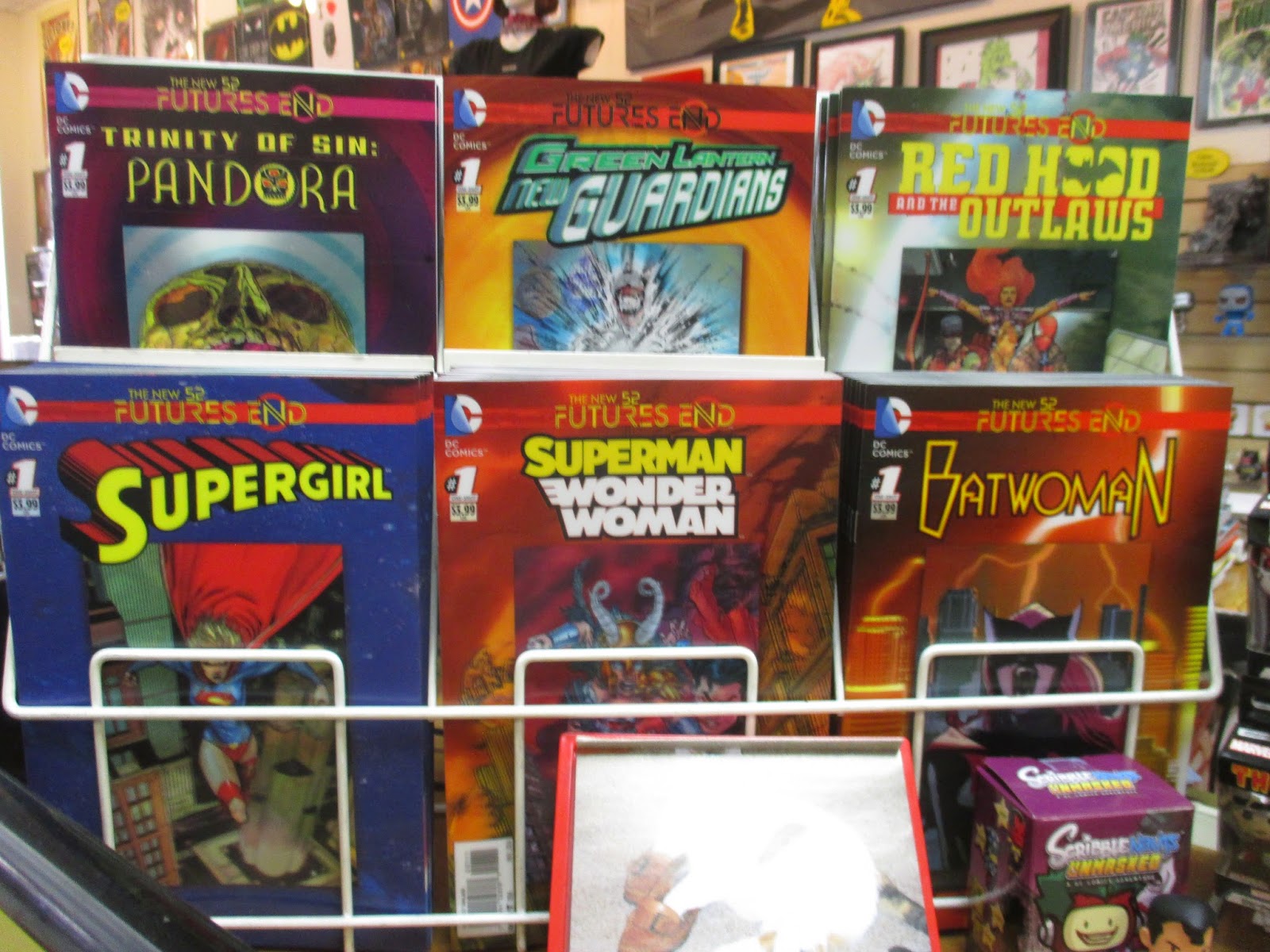 Lat Thor before a new person picks up the hammer! Edge of Spiderverse with Spidey-Gwen! Sorry I don't have a lot to say right now, I just need to get to reading these haul! Hope to see a lot of you for another fun packed New Comics Wednesday!
at September 16, 2014 No comments: 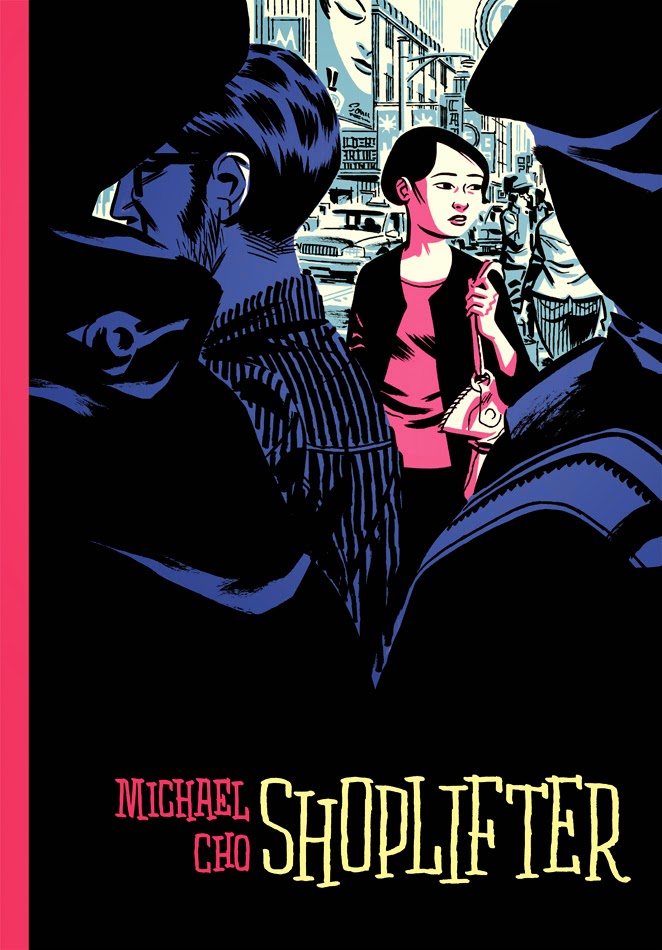 This week, fantastic artist, Michael Cho's first graphic novel came out, titled Shoplifter. Prior to Shoplifter, Michael Cho did covers and webcomics, but I've wanted a longer print production from him for a long time. 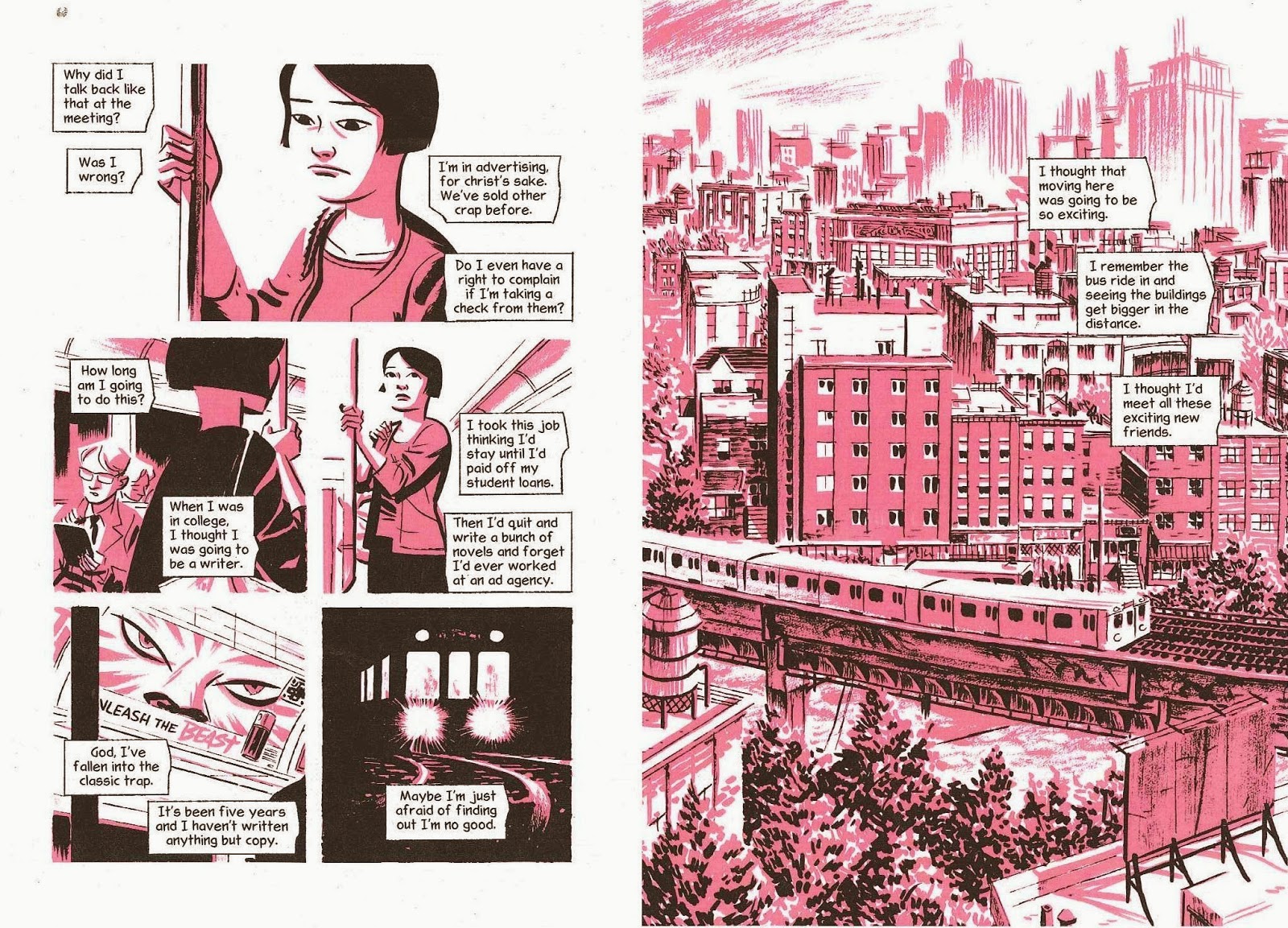 The title of Cho's first graphic novel turned me off initially, but Shoplifter isn't really about what the title suggests (although shoplifting does occur within). Rather, Shoplifter is about Corinna Park, a young woman trying to find her way in life, who ultimately has an epiphany that directs her to a future for herself that has more promise than the life she is living until she has said epiphany.

I'd recommend Shoplifter just for Michael Cho's gorgeous artwork, but I'm happy to say that his writing shows tremendous promise and I can't wait to see / read his future comic / graphic novel creations. 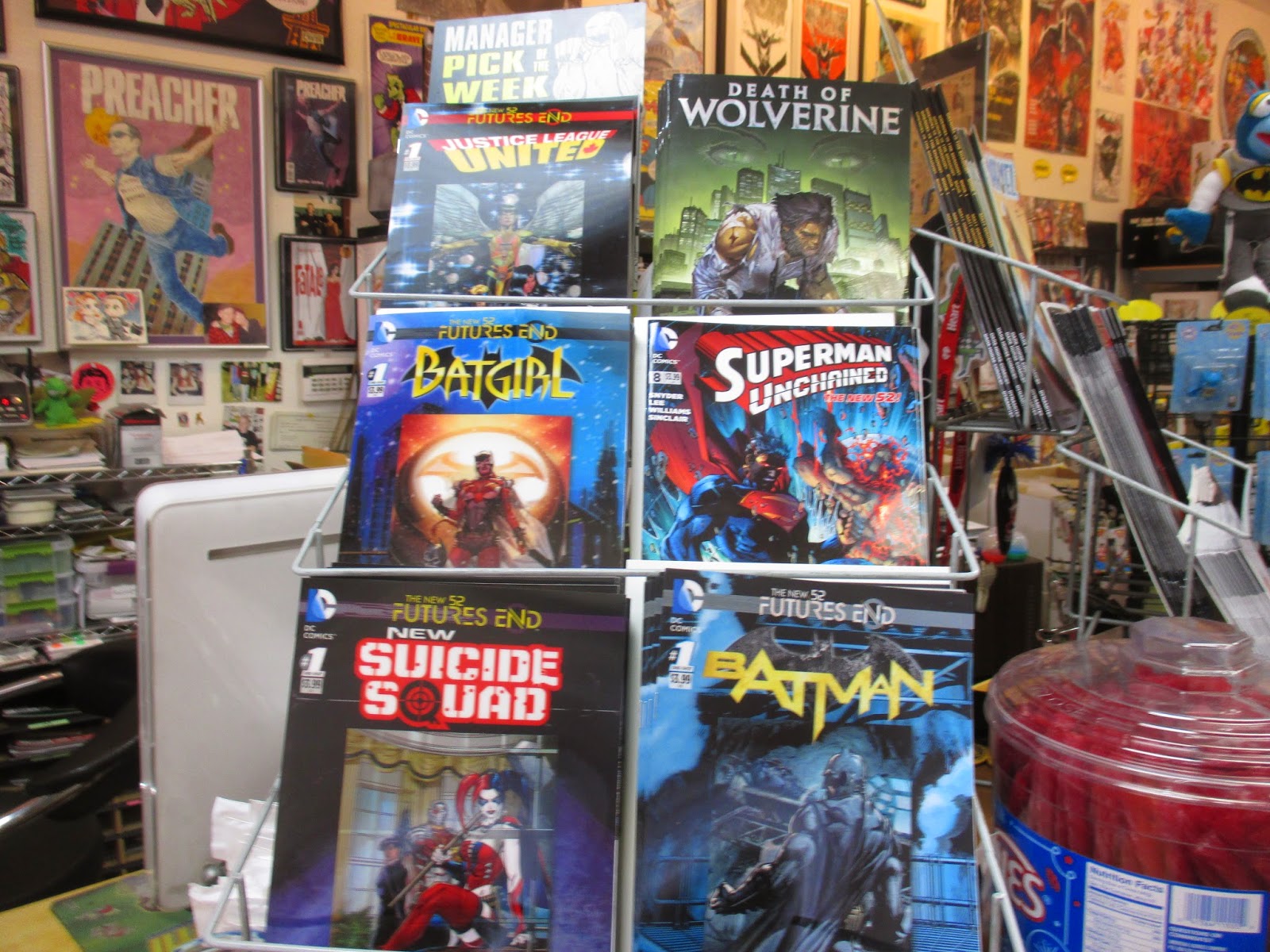 Ten more of DC's September lenticular 3D Future's End titles this week, along with the second issue of Death of Wolverine! 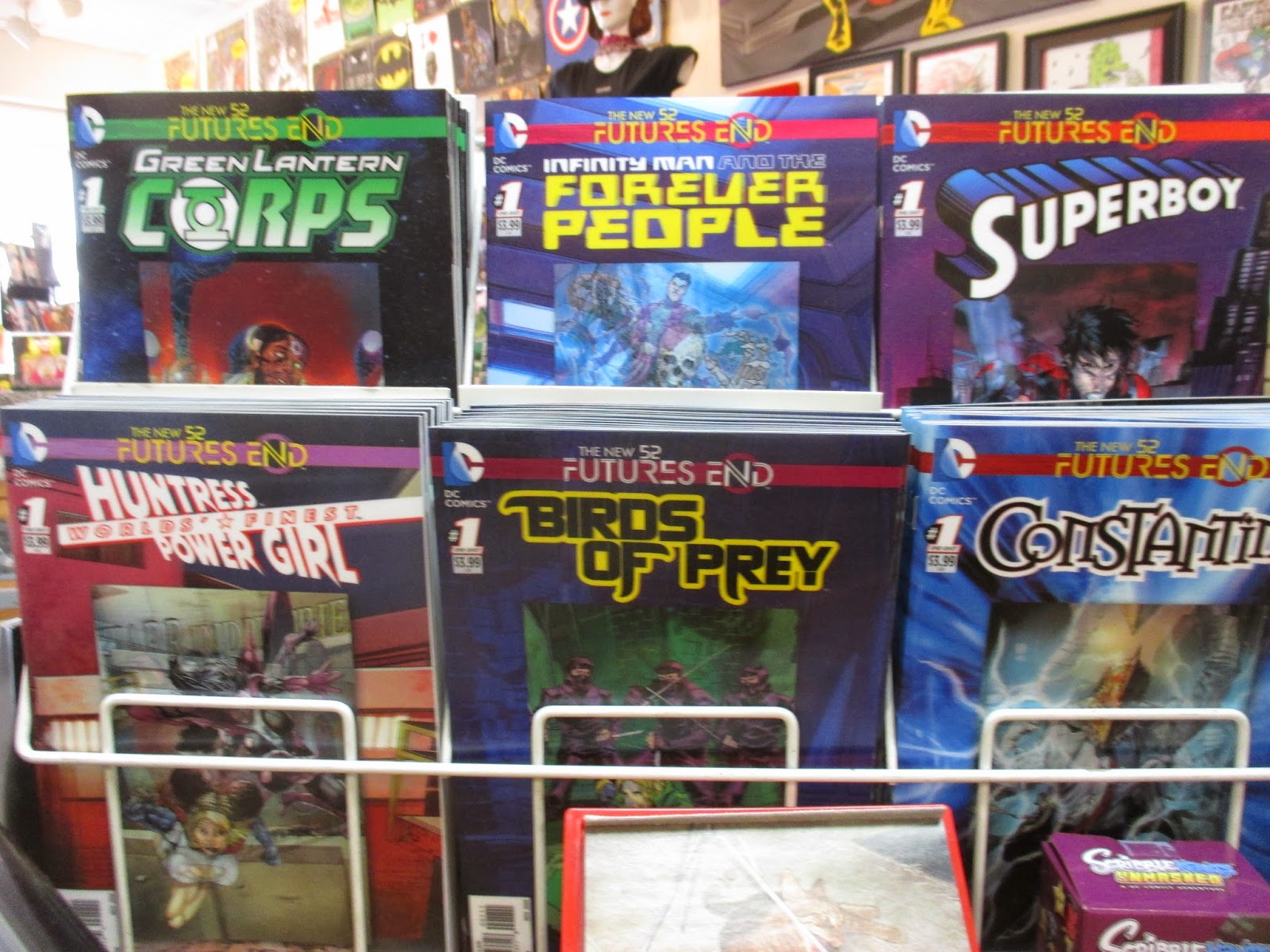 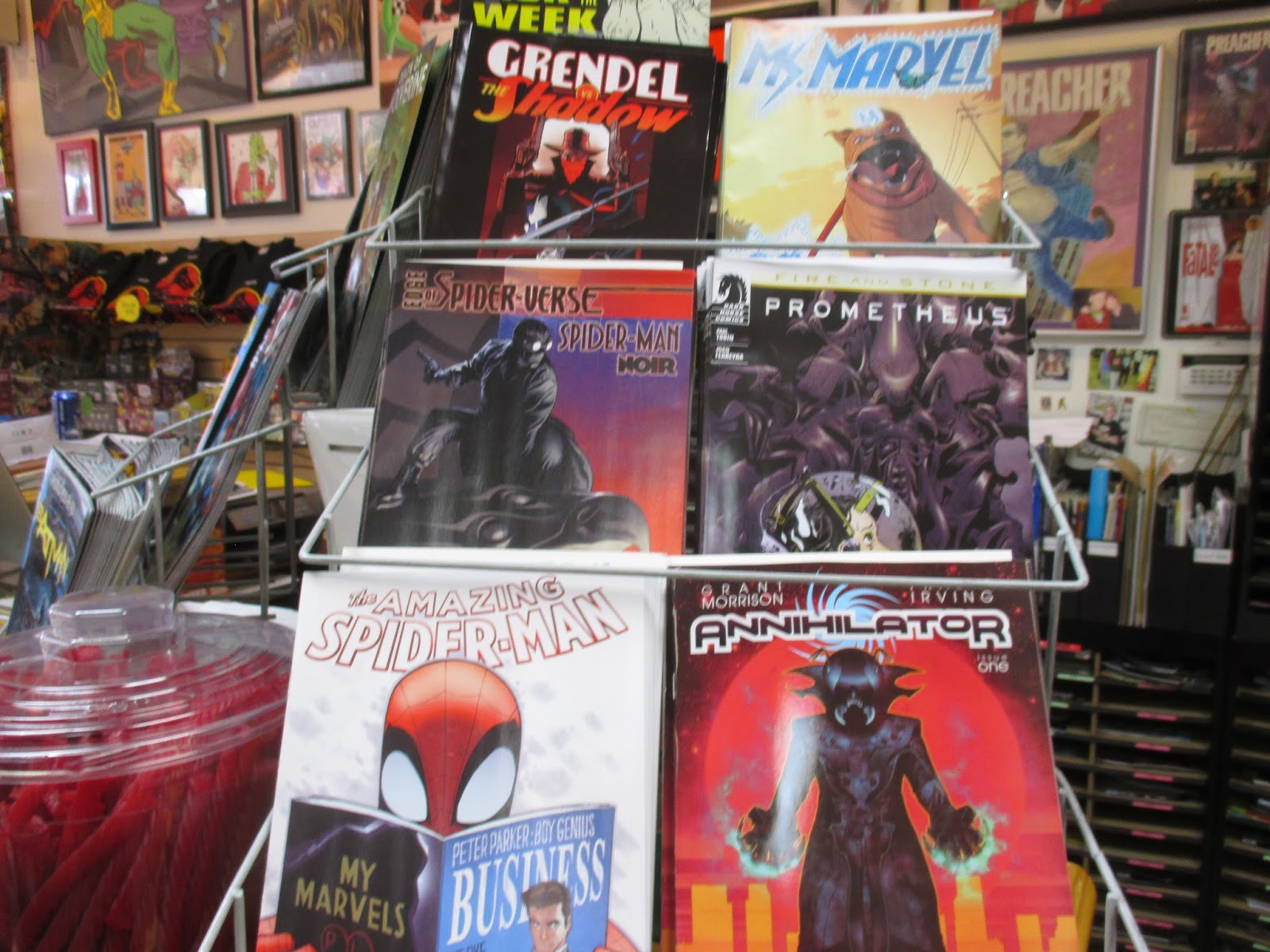 Grant Morrison and Frazer Irving's new title Annihilator starts as well as Dark Horse's first issue of their Aliens comic, Prometheus! I'm spotlighting last week's Grendle / Shadow by writer / artist Matt Wagner because I didn't get all of my copies last week and I think this may have fallen under a lot of people's radar - I can't think of a more natural character meet up than this! 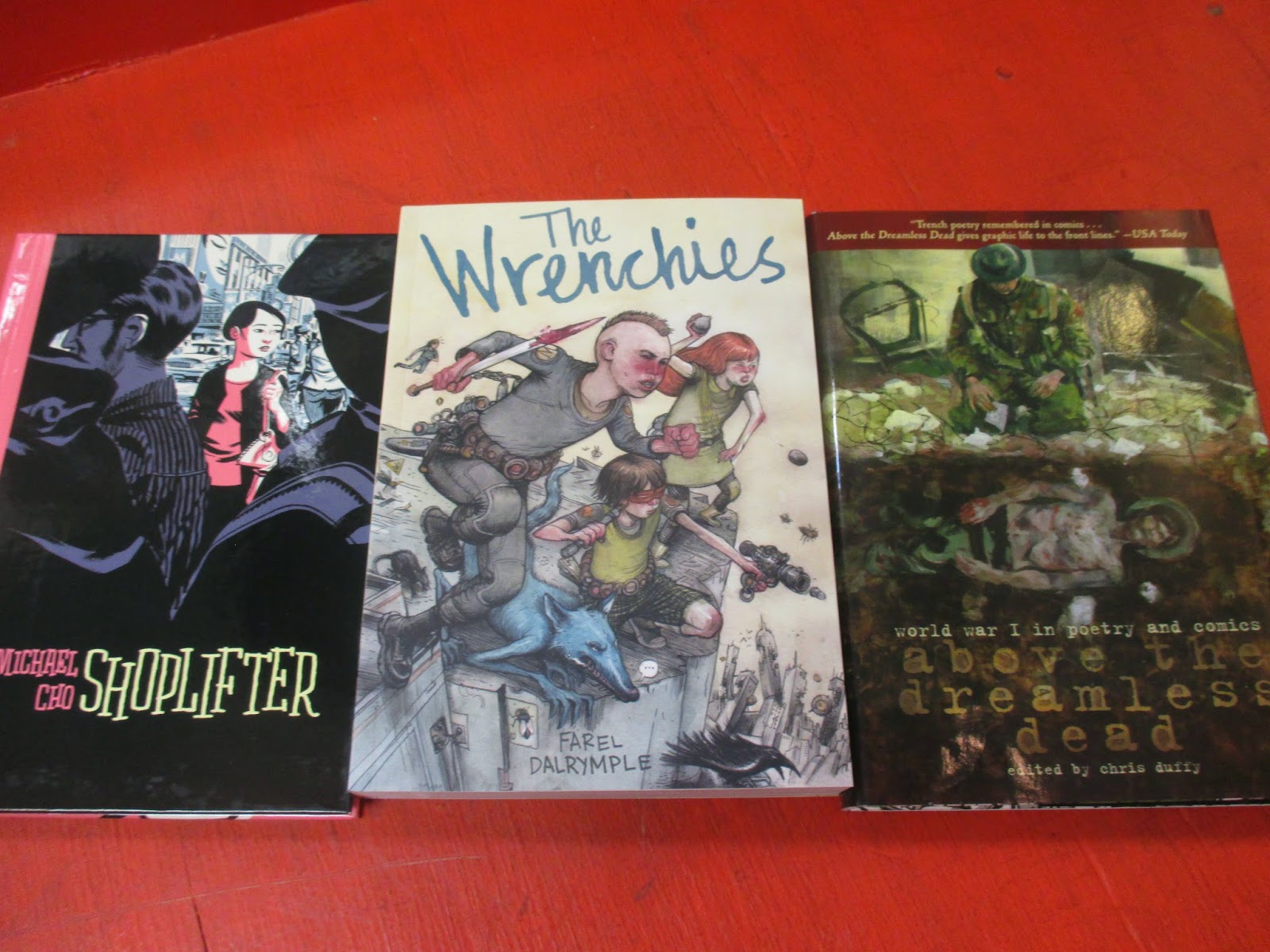 These are three new graphic novels I'm looking forward to reading this week! Shoplifter is by great cartoonist, Michael Cho (he's got a Darwyn Cooke art style), I'm truthfully worried about the story though because the title is one of my least favorite topics. The Wrenchies is written and drawn by one of my favorite artists, Farel Dalrymple and Above the Dreamless Dead is a collection of great cartoonists adapting poems about World War I!
at September 09, 2014 No comments: 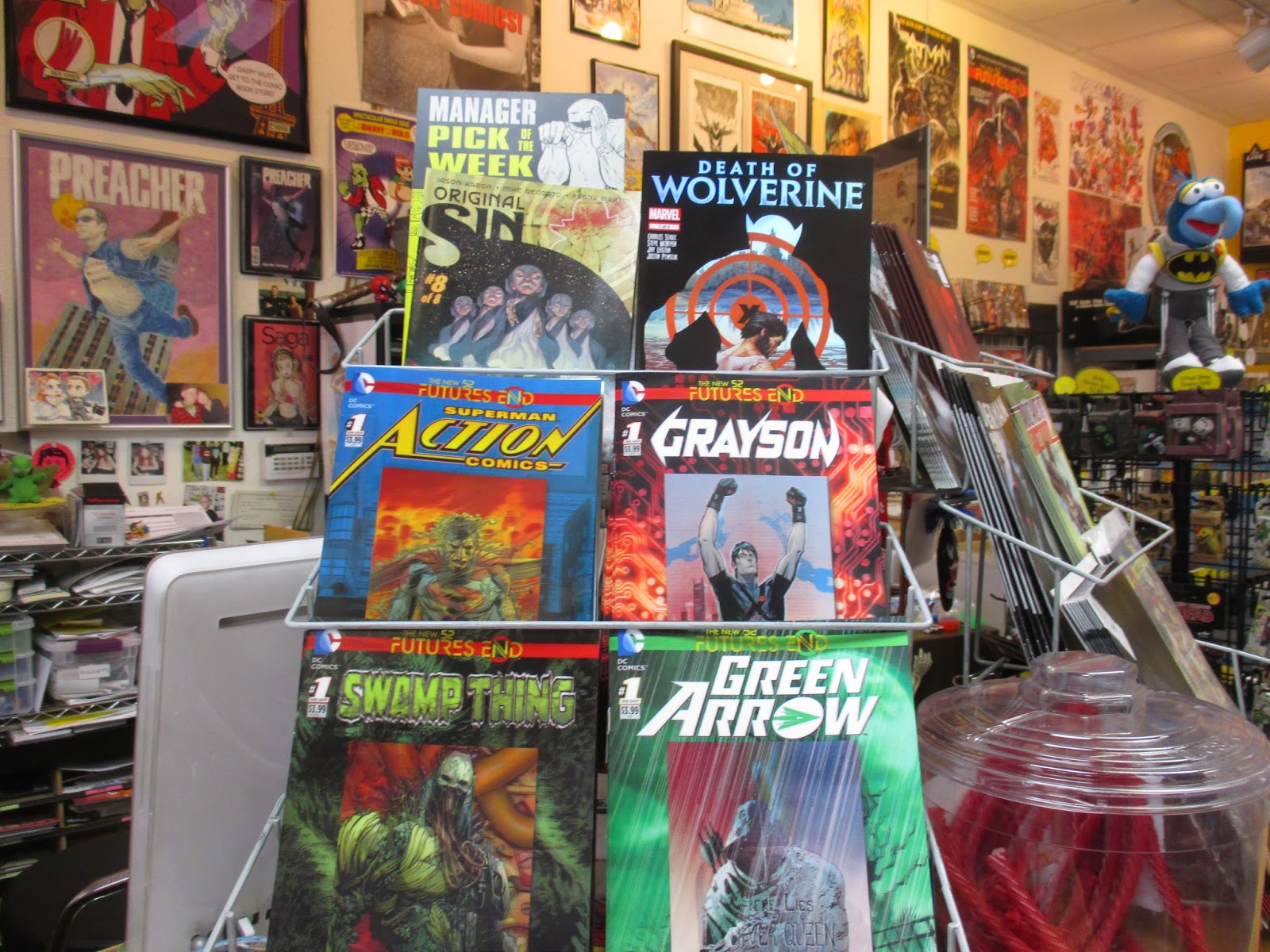 Original Sin concludes - I liked it! Death of Wolverine starts! Okay, I know that everyone reading this is saying, "Yeah, right, Wolverine is going to die, for what, ten minutes!?" Death is like a bad cold in comics, just about all of the characters get over it. We know that Marvel can't really keep Wolvie dead, just like DC could keep Supes dead, but there is speculation that Marvel isn't as enthused about characters (such as Wolvie and the X-Men) that they don't have in their movie studio (Disney). Anyway, at the end of day, Marvel still makes money on Wolverine comics, but on a comics news site, it was reported that he'd be dead until at least 2016. However long Wolvie stays dead, this mini series should be good as it's by writer, Charles Soule (She Hulk), and artist Steve McNiven (Old Man Logan, Civil War)! The multiple post Death of Wolverine comics I'm very suspicious of though (and think there's too many). 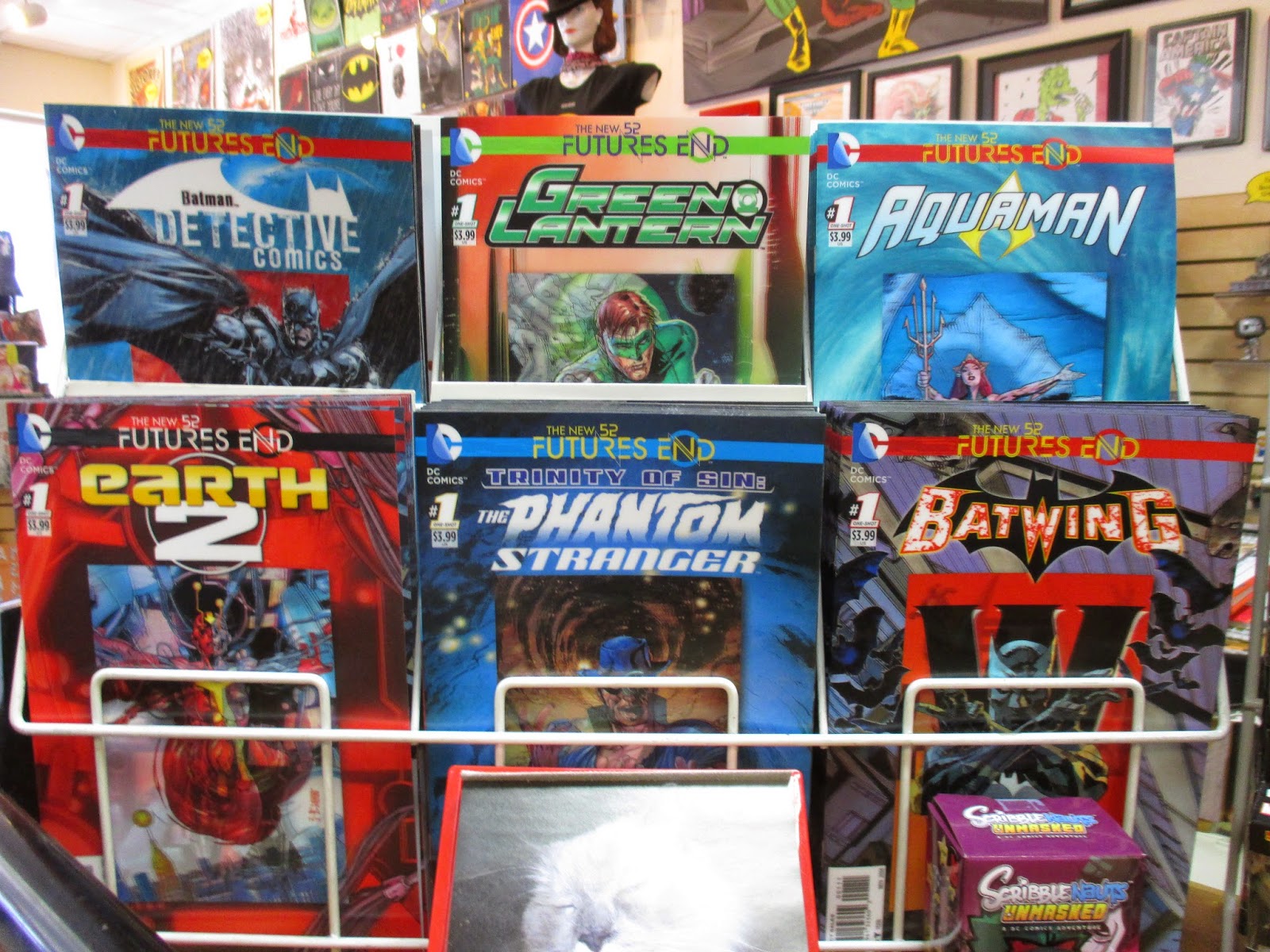 Ten DC holographic / lenticular 3D comics this week! They have the Future's End banner above their logos, but it's my understanding that you don't have to read those to read these September one shots. So while I haven't read any of these yet, the covers are fun eye candy, right!? 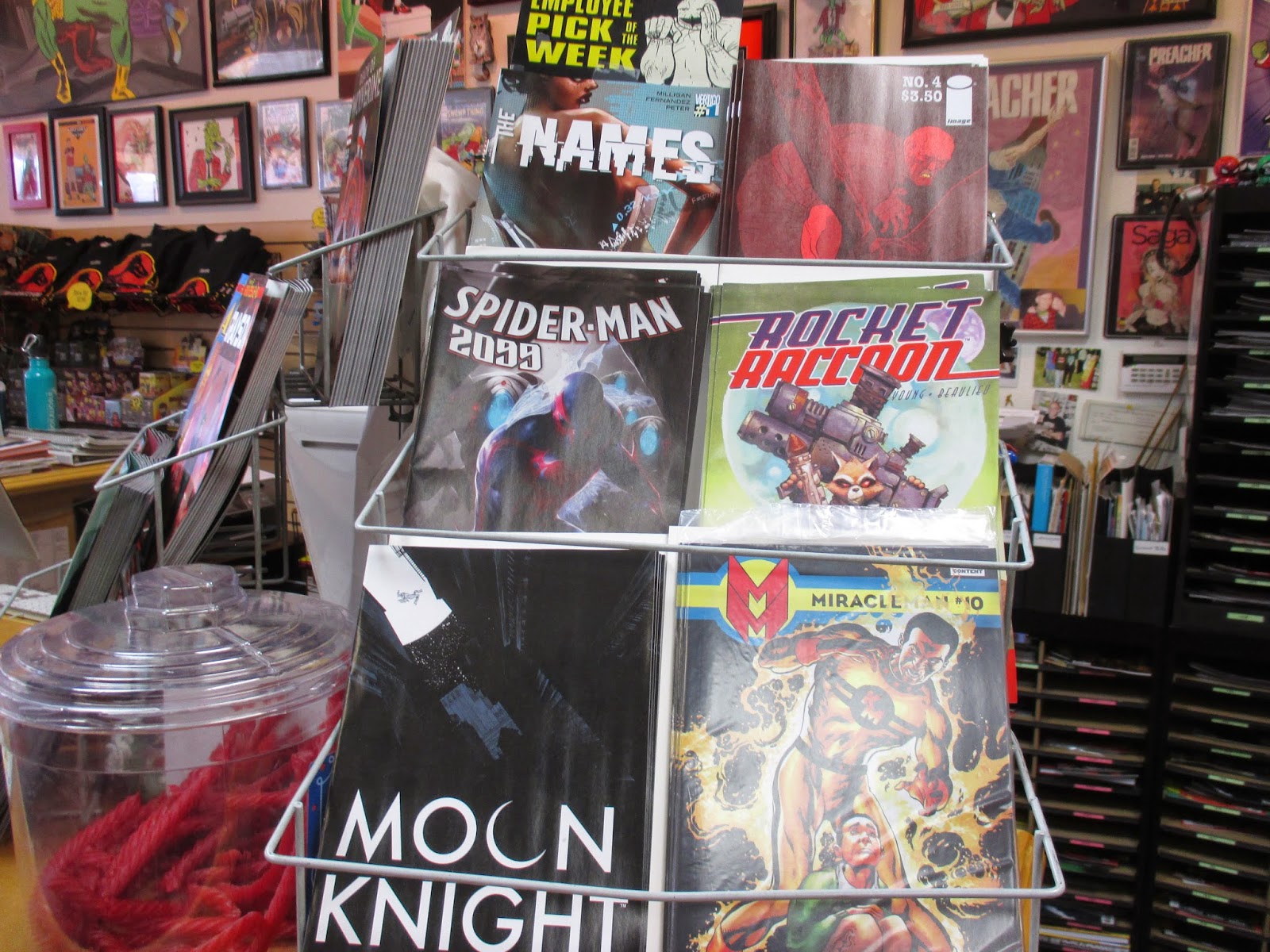 Names #1 is a new Vertigo title by Peter Milligan and Landro Fermadez and it was a REALLY STRONG debut! It's about a woman whose husband died, by suicide some people are trying to convince her was the way, but she knows that wasn't something he'd do (and she gets proof in a video her husband had sent to her in the event of his death), so she sets out to revenge his death. Money back guarantee first issue!! Southern Bastards #4 concludes the first story arc and this is next on my reading stack - love this title! I'm also loving Peter David's return to Spider-Man 2099! Brian Wood takes over the writing on Moon Knight, he's got big Ellis shoes to fill! Miracleman #10 is the conclusion of the second book of Alan Moore's Miracleman - next issue we have his concluding third act, Olympus, with FANTASTIC artist, John Totleben, and as good as Miracleman has been, wait until you read and look at Olympus!


We're really excited to have local Vegas artist Damon Von Bohn as our September Artist Spotlight. I've known Damon for years and had seen some of Damon's art, but it's only been fairly recently that I became aware of Damon's enormous artistic prowess! We can't wait to share this art with the Vegas art loving community! We'll have our customary complimentary soft drinks, wine, and snacks for you to enjoy while you visit with Damon Von Bohn and enjoy this wicked keen art! 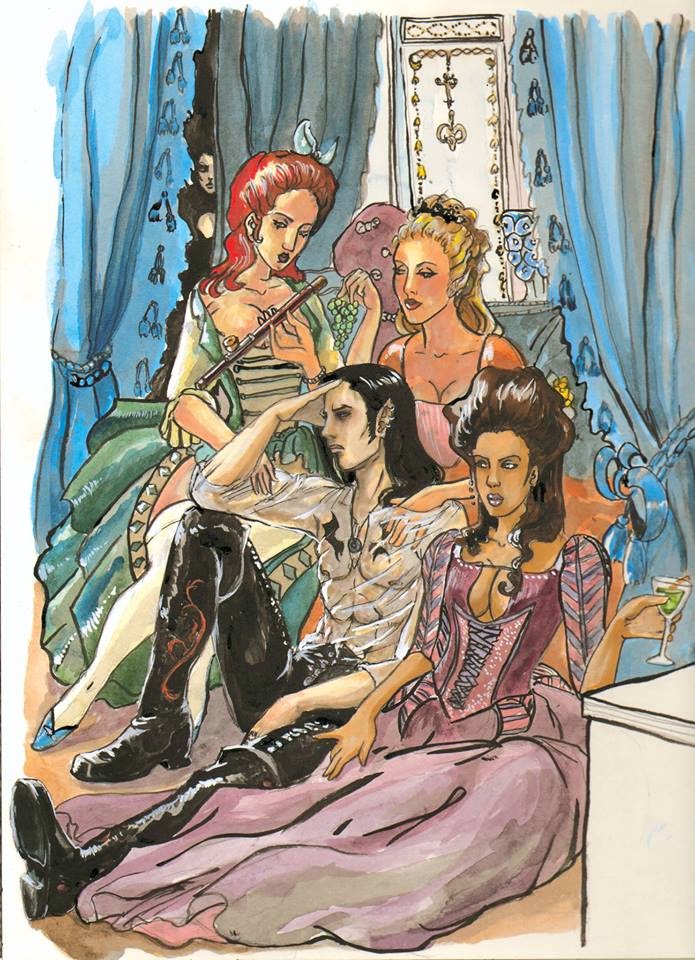