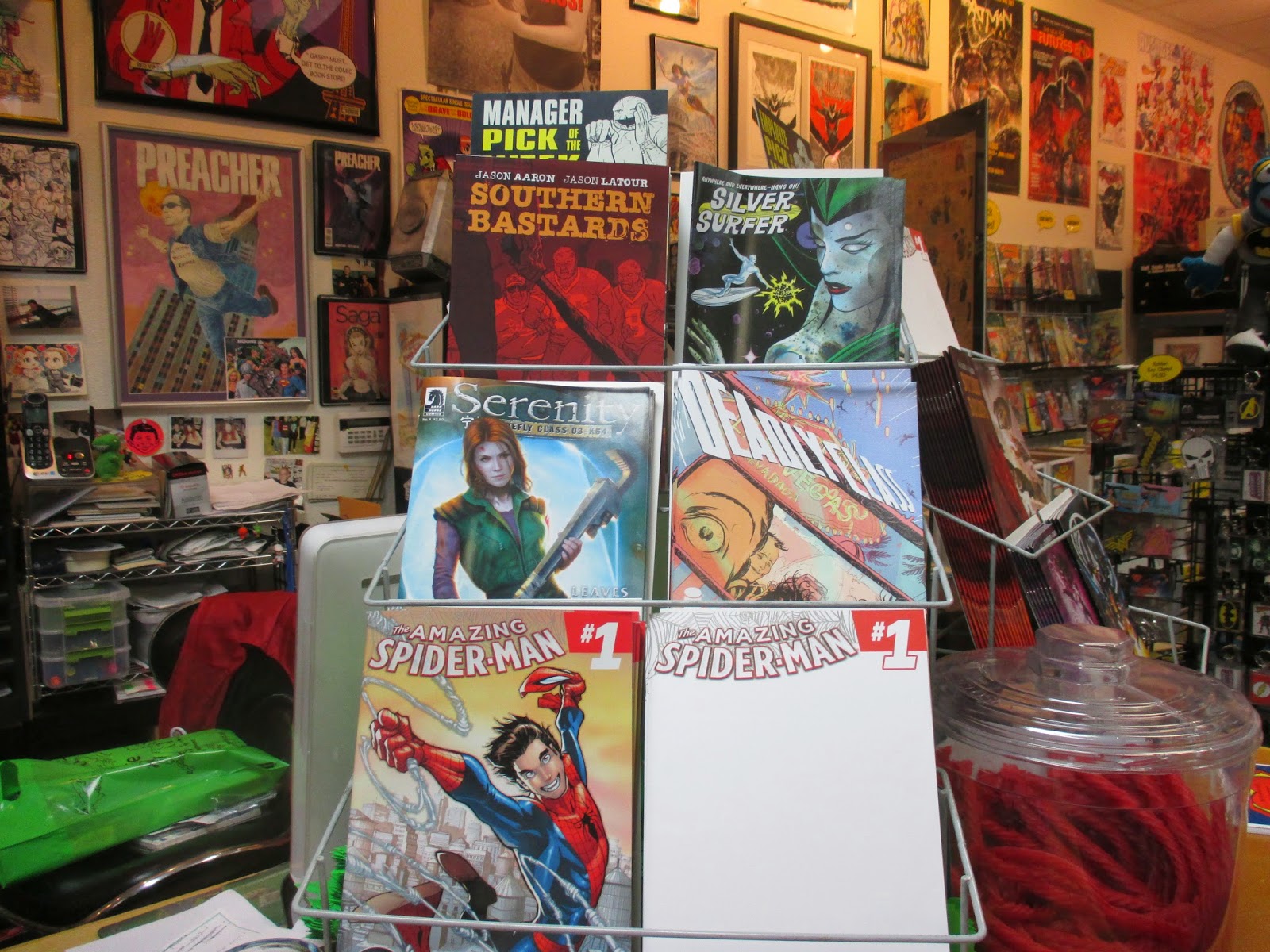 Southern Bastards, a new comic by Jason Aaron and Jason Latour is my super-unqualified pick of the week! Big DC Annual week, with Batwoman, Batgirl, Green Lantern New Guardians, and Flash - featuring Barry's first meet up with Wally! Can't wait to read the second issue of Silver Surfer and the new Deadly Class! Peter Parker is back in the first issue of Amazing Spider-Man since 1962 (well there may have been another Amazing #1, but it's still a big deal to a lot of people!) and he's regained his body and is surprised at a lot of things in his life that have changed since Doc Oct was running around in his place (also, we have blank cover versions of the first issue which are great for having artists draw upon, like at our Free Comic Book Day event this Saturday and or at the Amazing Las Vegas Comic Con at the South Point, June 20-22nd)! Here's some other details about other things happening at Alternate Reality Comics tonight and Saturday to truly make this a week of EPIC FUN to remember!: 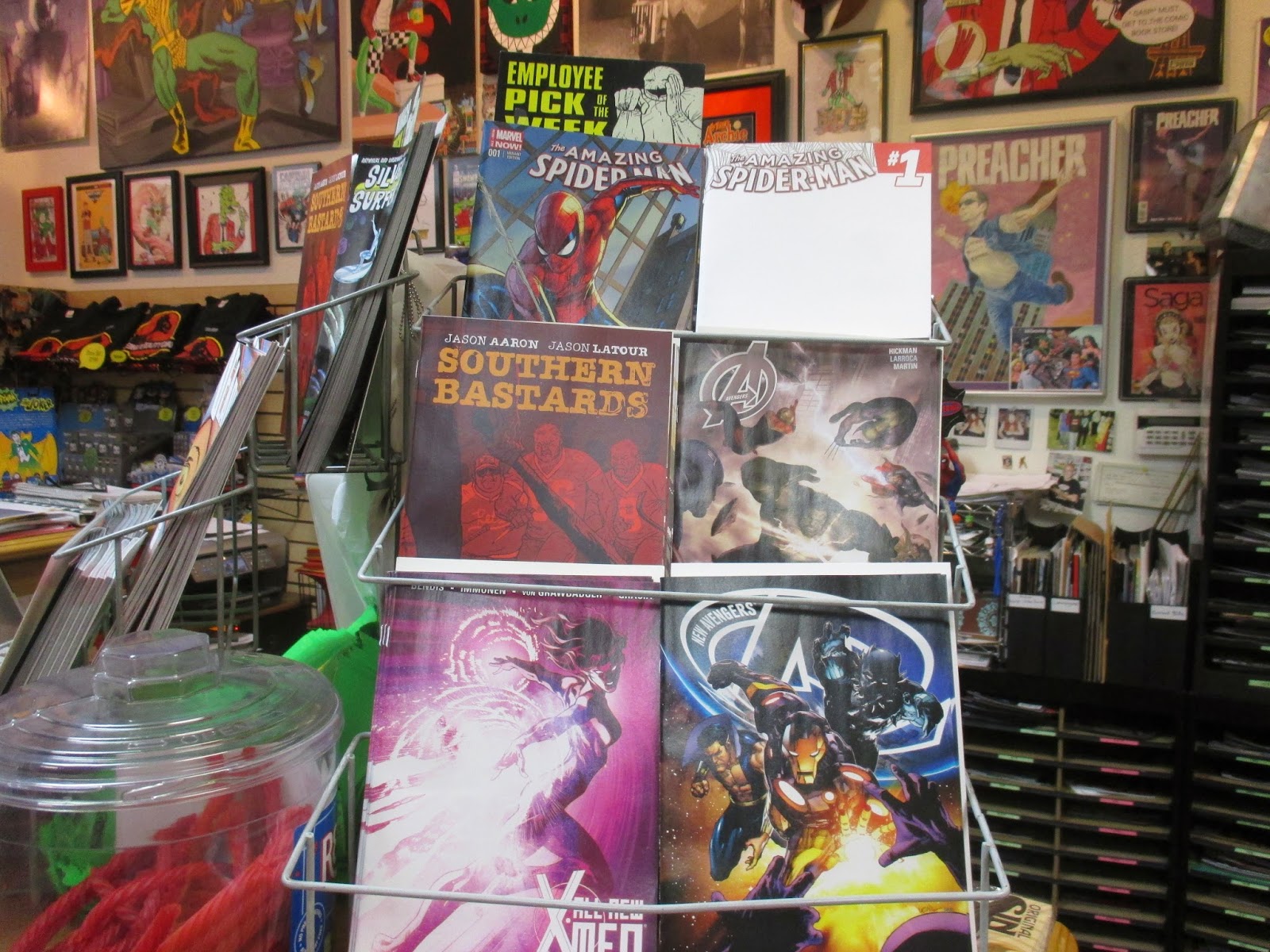 Tonight, Wednesday, April 30th from 4-8pm is our HUGE Batman Artist Spotlight Opening Reception featuring 57 pieces of art that people turned in to help us celebrate Batman's 75th Anniversary! Most of the artists should be at the opening reception so this is your chance to give ego strokes to some amazing talent we have here in Vegas! AND as if that's not enough excitement - the Very Awesome Girls Into Nerdy Activities will be at the store during the opening reception with their nerd craft sale benefit, of which all of the money raised will be donated to AFAN and the AIDS Walk at UNLV this Saturday! You can also donate and walk with them and us on Sunday, May 4th at UNLV under their Skywalkers group name (since it's May 4th - may the fourth be with you!) - they'll have details at their craft sale, or just ask me for details anytime through Saturday! Here's Saturday's haps!: 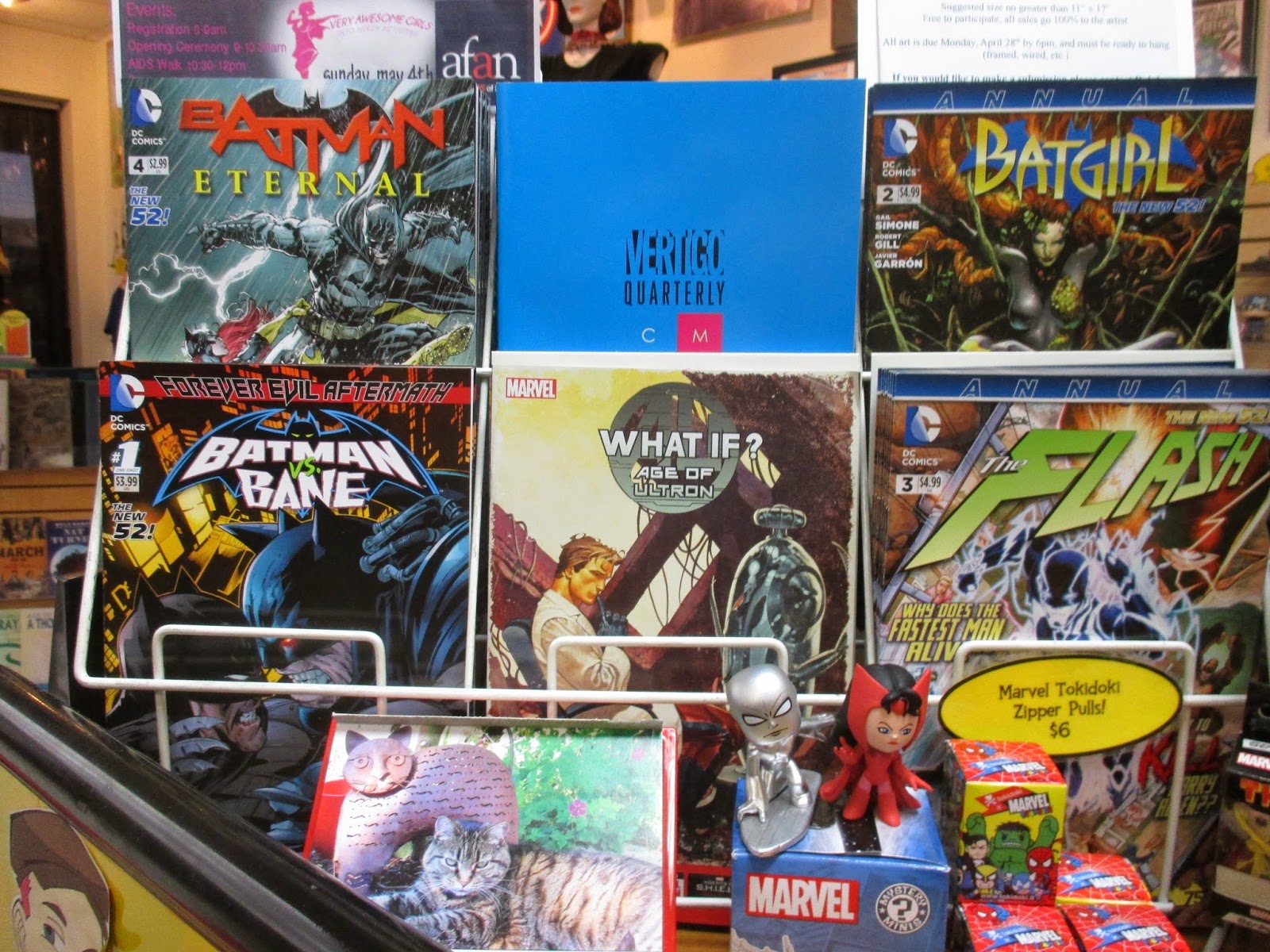 This Saturday, May 3rd is the 13th annual FREE Comic Book Day! Here's what Alternate Reality Comics has in store for all of you sequential art lovers!: Firstly, of course, the star of the day is FREE comics! To help us celebrate this big day, we'll have local artists, Joyce Hedelund, Donovan Petersen, Ed Nesmith, & Randi LeeAnn sketching, the Zombie Dogs Food Truck / Catering will be here from 11am-2pm (really LOW prices & vegetarian options!), hourly raffles (everyone who comes gets a free raffle ticket) until 6pm (gift cards & graphic novels!), a HUGE back issue sale, & we'll have costumed friends helping out & everyone is encouraged to come in costume (costumed peeps get an additional free raffle ticket!) Hope you all can join us in the FUN and FREE comics! And this will be a perfect day to see our May Artist Spotlight group show celebrating Batman's 75th anniversary (opening reception this Wednesday, April 30th from 4-8pm)!
at April 29, 2014 No comments: 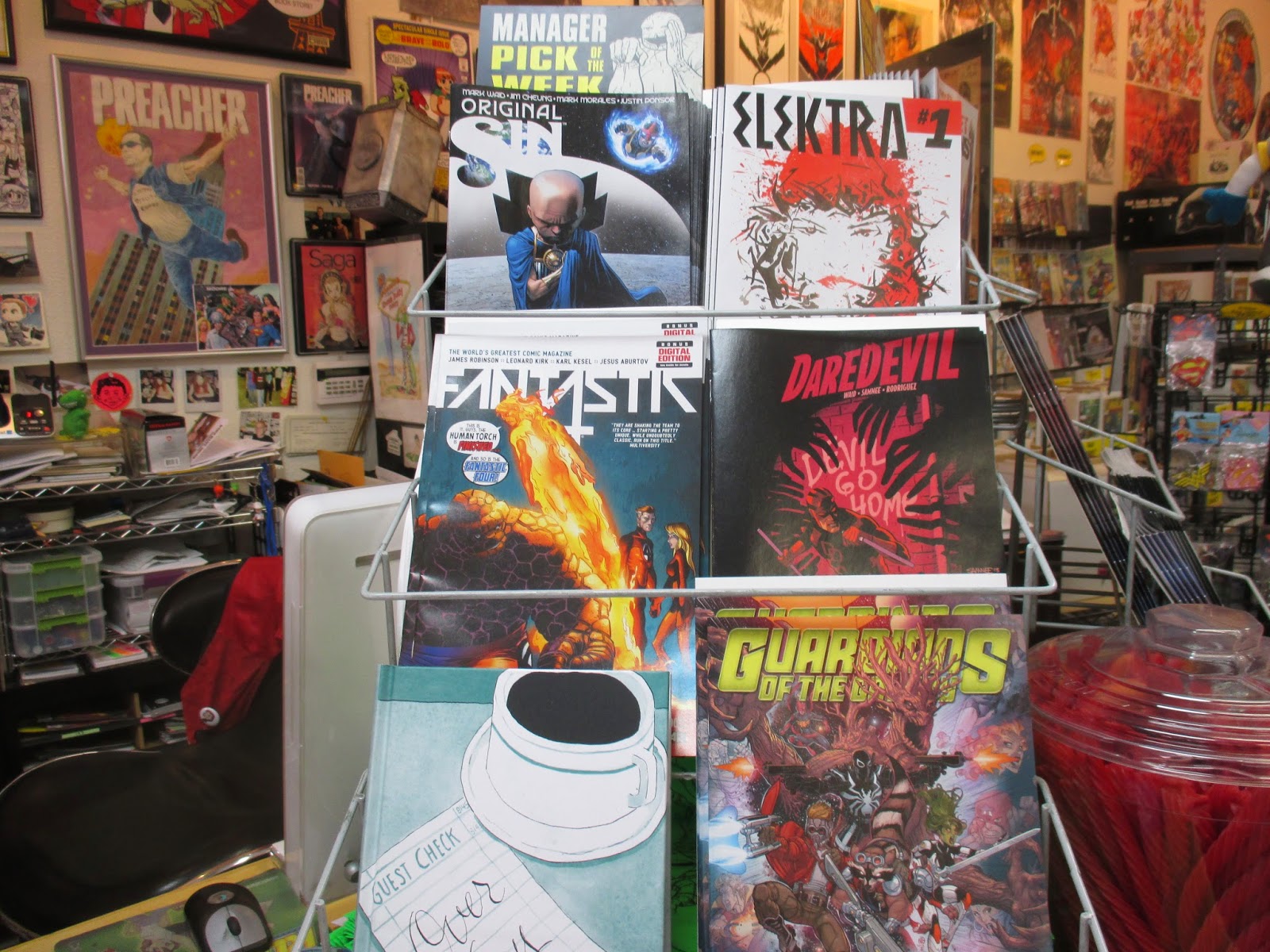 Original Sin is a Marvel mini series about the Watcher being killed by someone who also took out his eyes. Today's Original Sin #0 is more of a Nova-centric story (but a really good Nova story) in which we also learn a lot about the Watcher before he is found dead in the first issue which comes out in two weeks. Original Sin is by Mark Waid and Jim Cheung. Also by Waid today is the new Daredevil and it's another great issue! Elektra debuts today and you've got to look at the interior art - it's really beautiful! 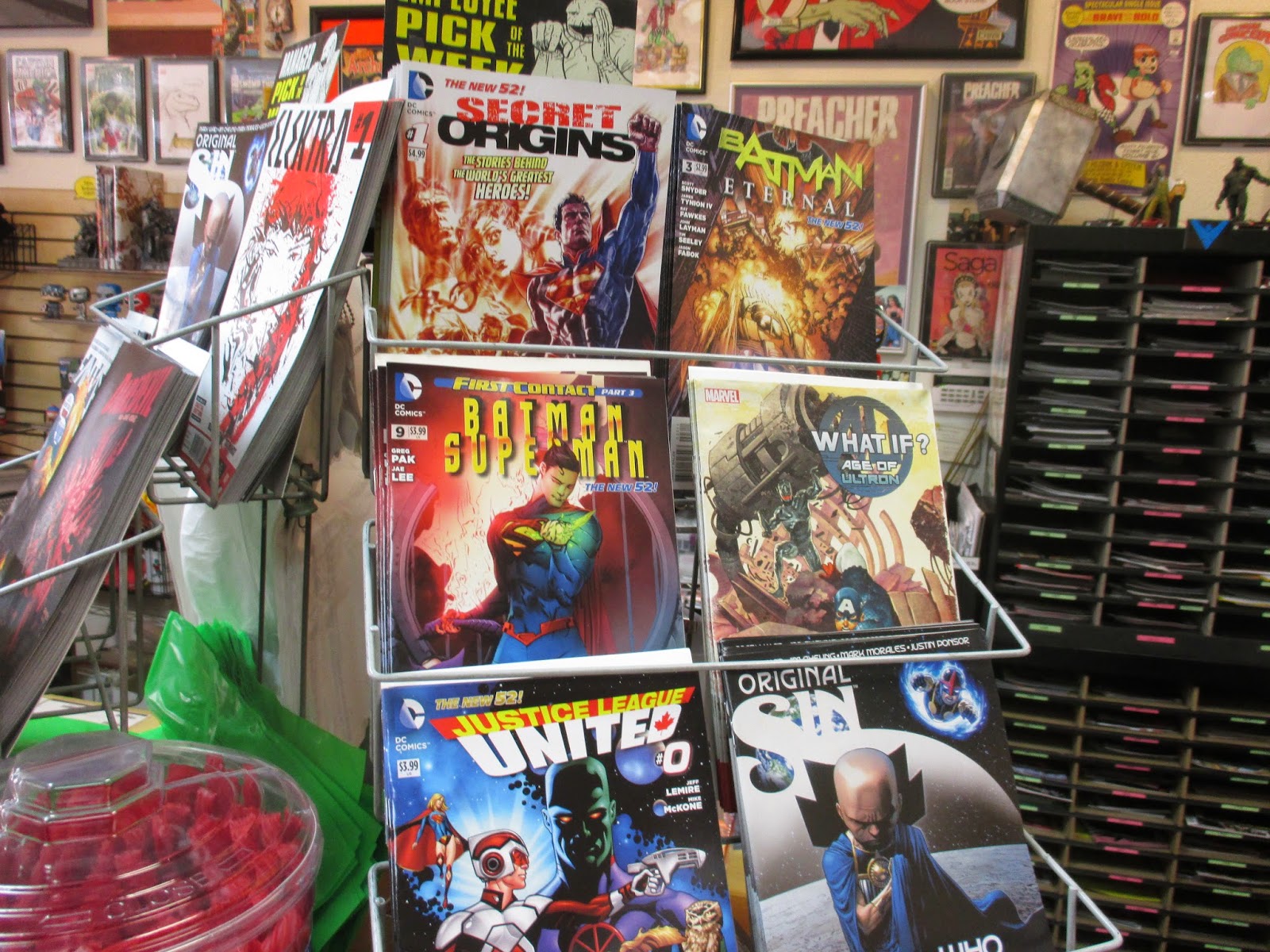 Secret Origins also debuts from DC today, this is a title that will have new origins of the new DC 52 characters! Do you miss Animal Man? - Well he's back in Justice League United! Things really get turned up in the third issue of Batman Eternal and we get the introduction to a character we haven't seen prior to this comic in the new DC 52! 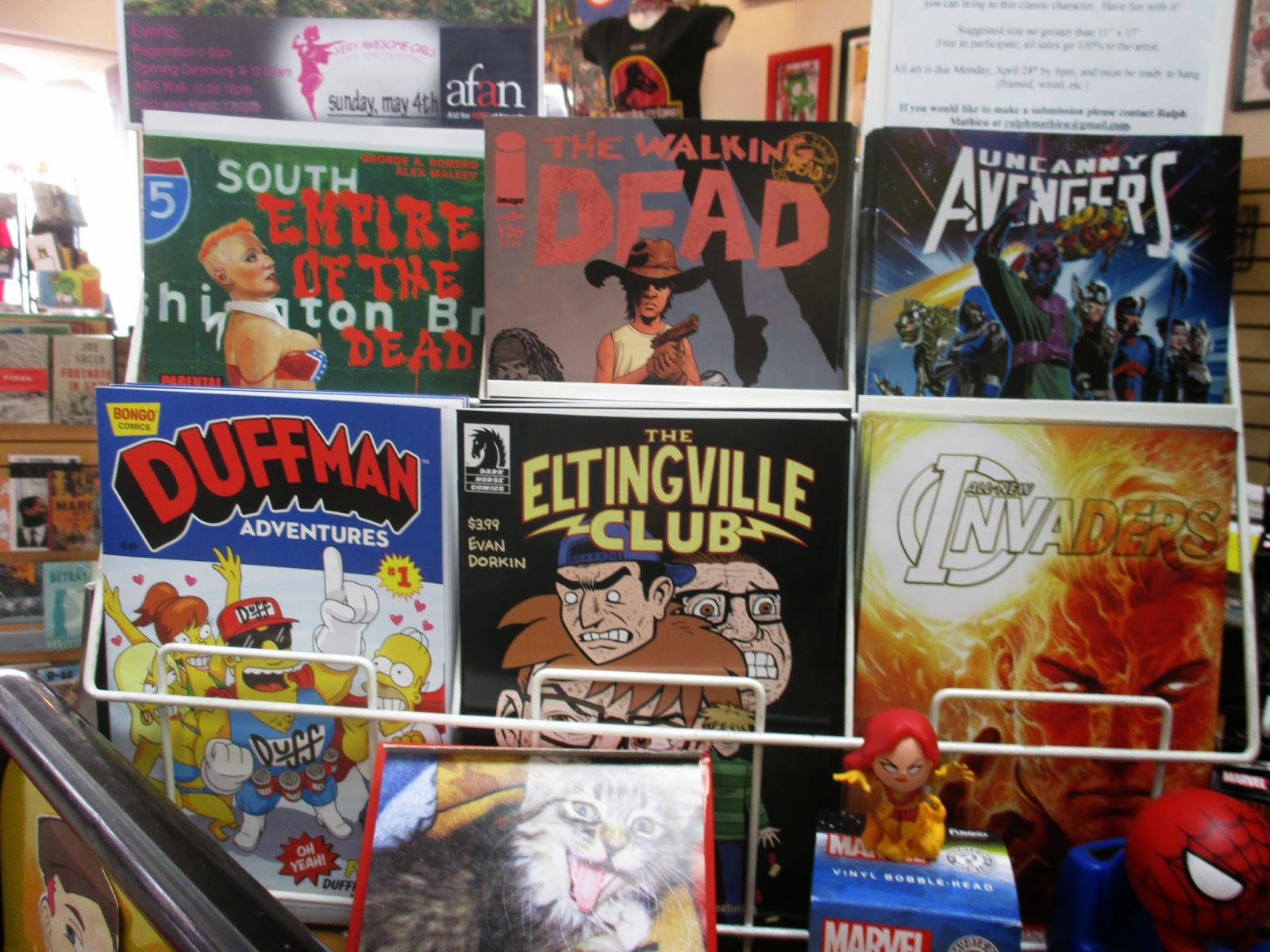 The conclusion to All Out War is in Walking Dead #127 this week (and we just came into a BIG Walking Dead collection if you're looking for any previous issues - we should have them ready to go in the next couple of days!) and it wasn't the ending I thought we'd see, but I think it was an ending that's going to continue to make this title a must read right away title every time it comes out! New issue of Powers Bureau today, new Flash (with the new creative team and the start of a storyline in which we see a character we haven't yet seen in the new DC 52), Oni brings us new issues of Letter 44 and Bunker, Image has Manhattan Projects, Zero, Thief of Thieves,  Lazarus, Ghosted, and Sheltered, there's two James Robinson comics this week - Fantastic Four & Invaders, and Matt Kindt has a new issue of Mind MGMT out!
at April 23, 2014 No comments: 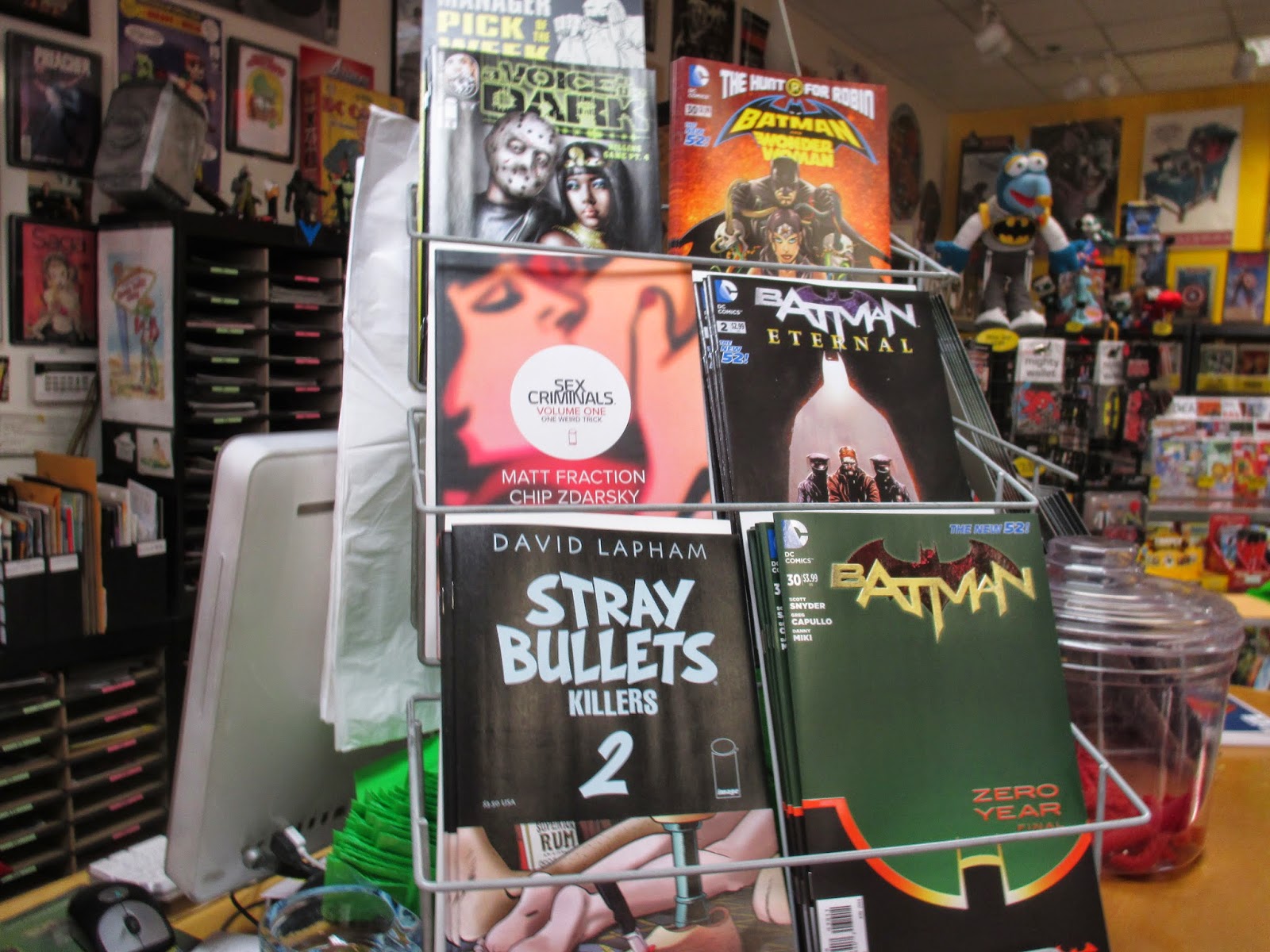 The penultimate issue of the first story arc of AVoice in the Dark and it's another great one, with some great twists (we have all issues in stock if you want to check this out)! The second issue of the returned Stray Bullets is another fantastic self contained story that will stay with you long after you've read it! Sales on Stray Bullets since its return have been somewhat lackluster strangely, because it has been well reviewed and everyone who reads it loves it (if they enjoy mature crime fictionesque narratives) - so today (Wed., April 16th), I'm going to GIVE the first 15 people who ask me about Stray Bullets, the first issue FREE! Haven't checked out Sex Criminals, one of the best new titles out there yet? Well today Image has a nicely priced ($9.99!) first volume out! 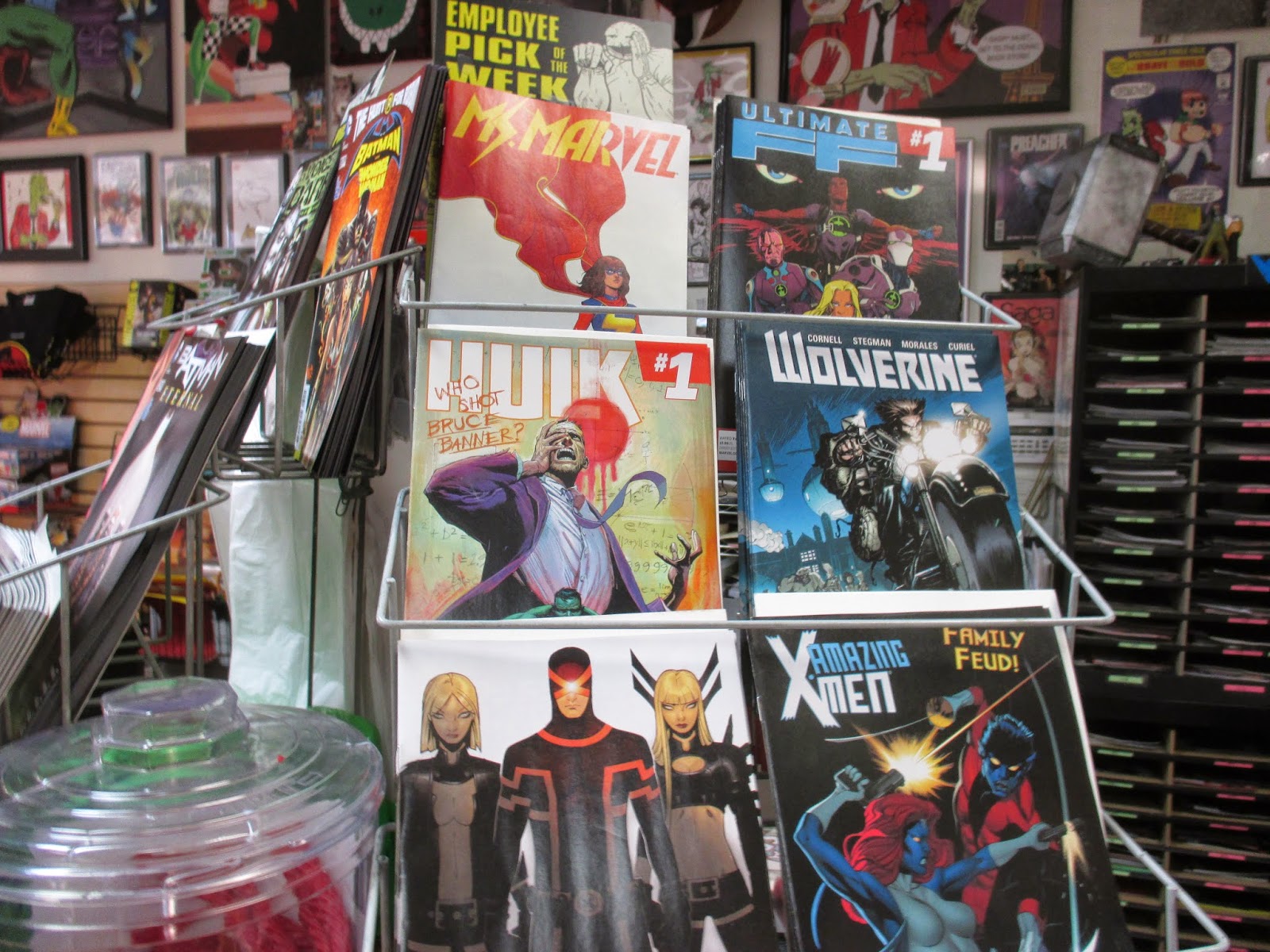 Third issue of the new Ms. Marvel is out and it's the best superhero title I've read so far this week and continues to be one of my most eagerly awaited new titles! Side note time: Every week I've got these eighteen slots up at the main counter to spotlight this week's new arrivals. This week is one of those weeks in which 18 slots isn't anywhere close to enough spotlight all of the great comics and trades that came out! For example, not included in these three photos is a title that's rocketing up to one of my new favorites, Auteur from Oni Press, Unwritten, Mercenary Sea, a new Regular Show trade as well as a new Adventure Time trade, and the third issue of Bernie Wrightson's Frankenstein Alive (you've got to look at this art, it's by a master sequential artist at the top of his craft!)! Actually as I just wrote the preceding sentence, I just thought of what I'll do in future weeks regarding writing this weekly teaser on New Comics Wednesday titles for those titles I don't have room to spotlight on these front displays! 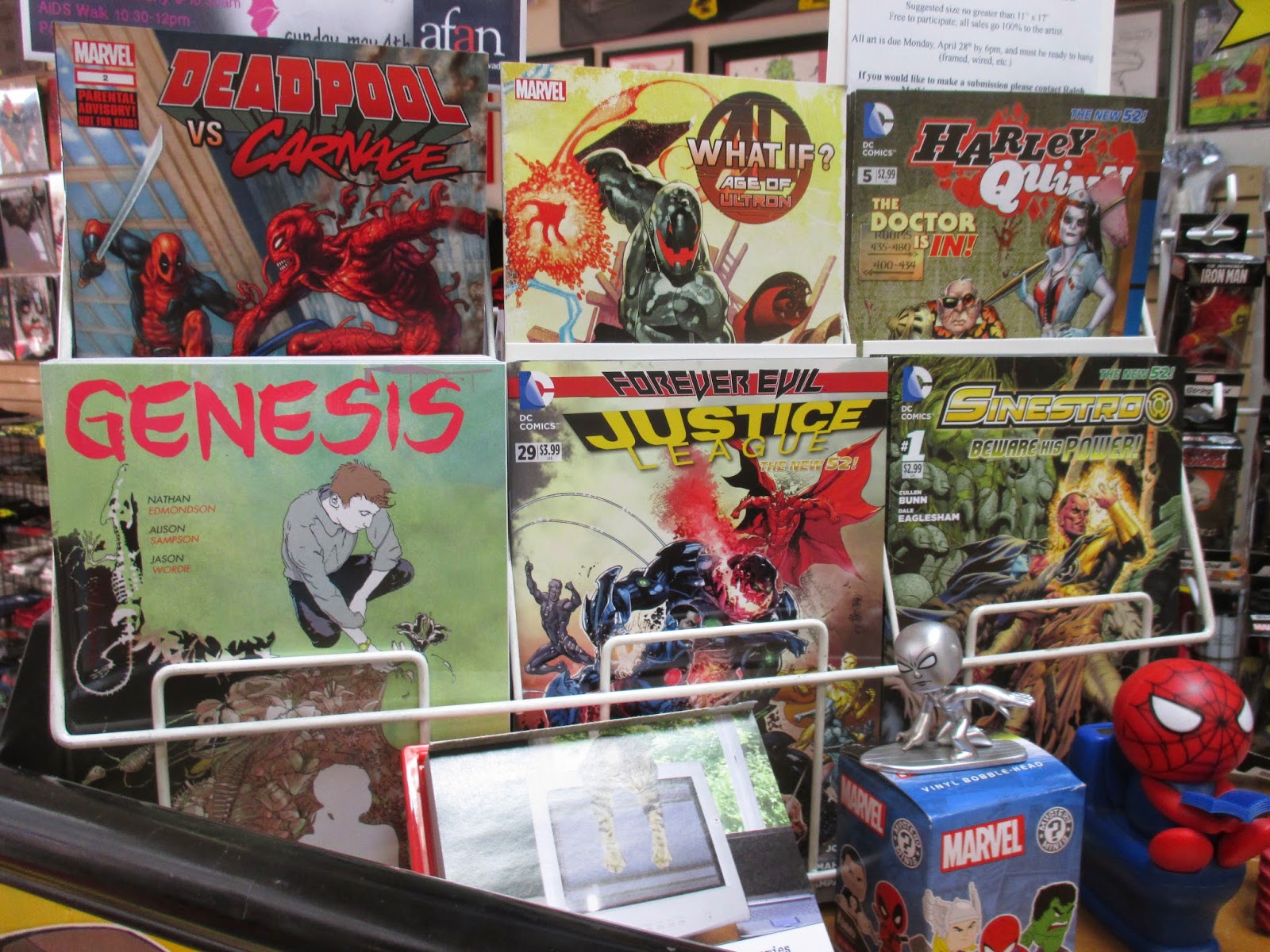 Genesis is a new self contained comic from Image written by Nathan Edmondson with fantastic art by Alison Sampson. It's a beautiful and horrifying story of power and destruction that I was quite surprised with. We also go in the new Funko Marvel mystery boxes and as you can tell by the Silver Surfer above, they're pretty damn cute, right!?
at April 16, 2014 No comments: 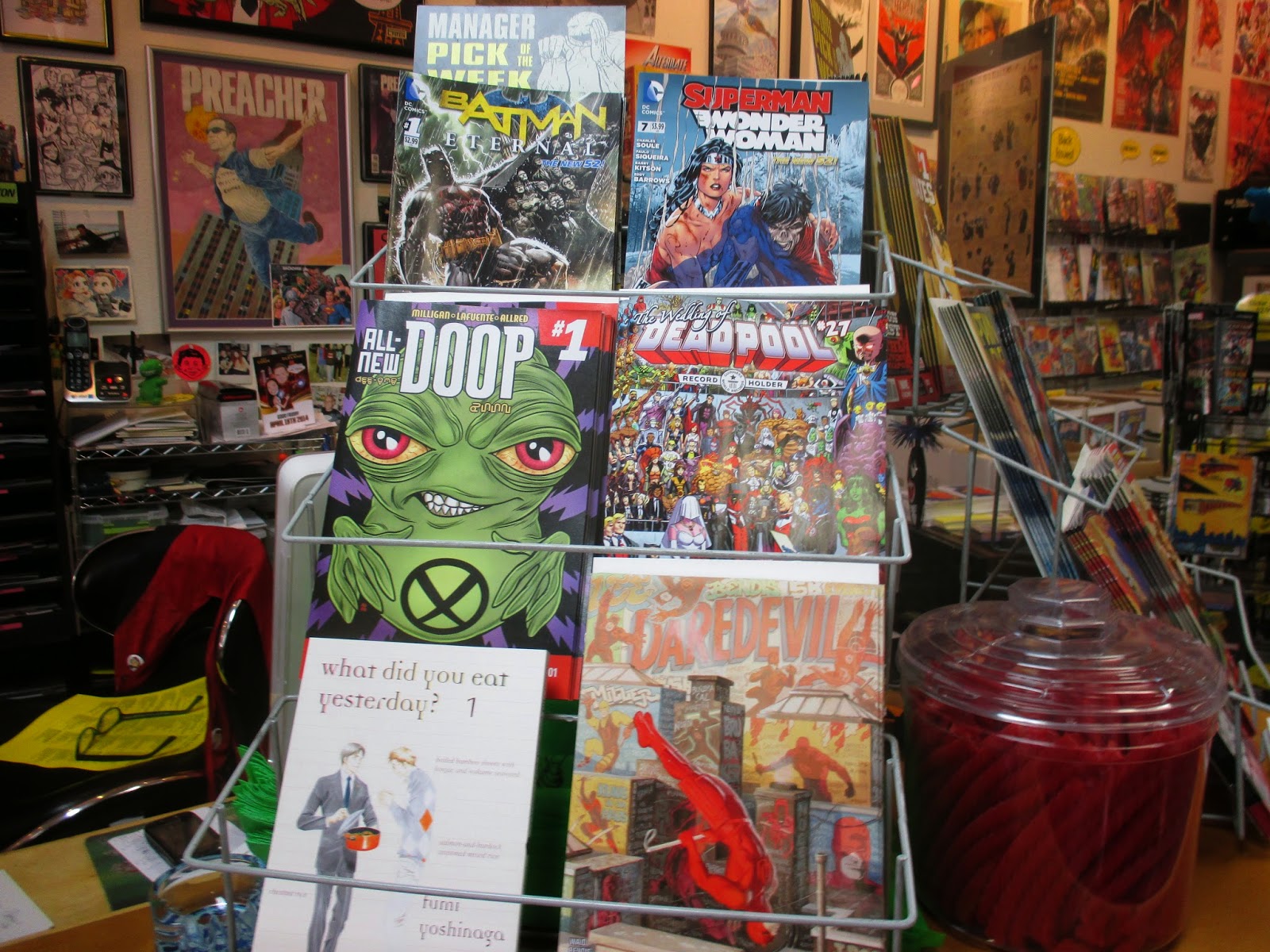 Batman Eternal weekly starts and it starts with something that will change the landscape of Gotham (how's that for some hype - grin!?) Doop! BIG, HUGE wedding issue of Deadpool, with guests galore, both costumed and on the creative front! This special issue of Daredevil also has some top notch creators and looks FAB! 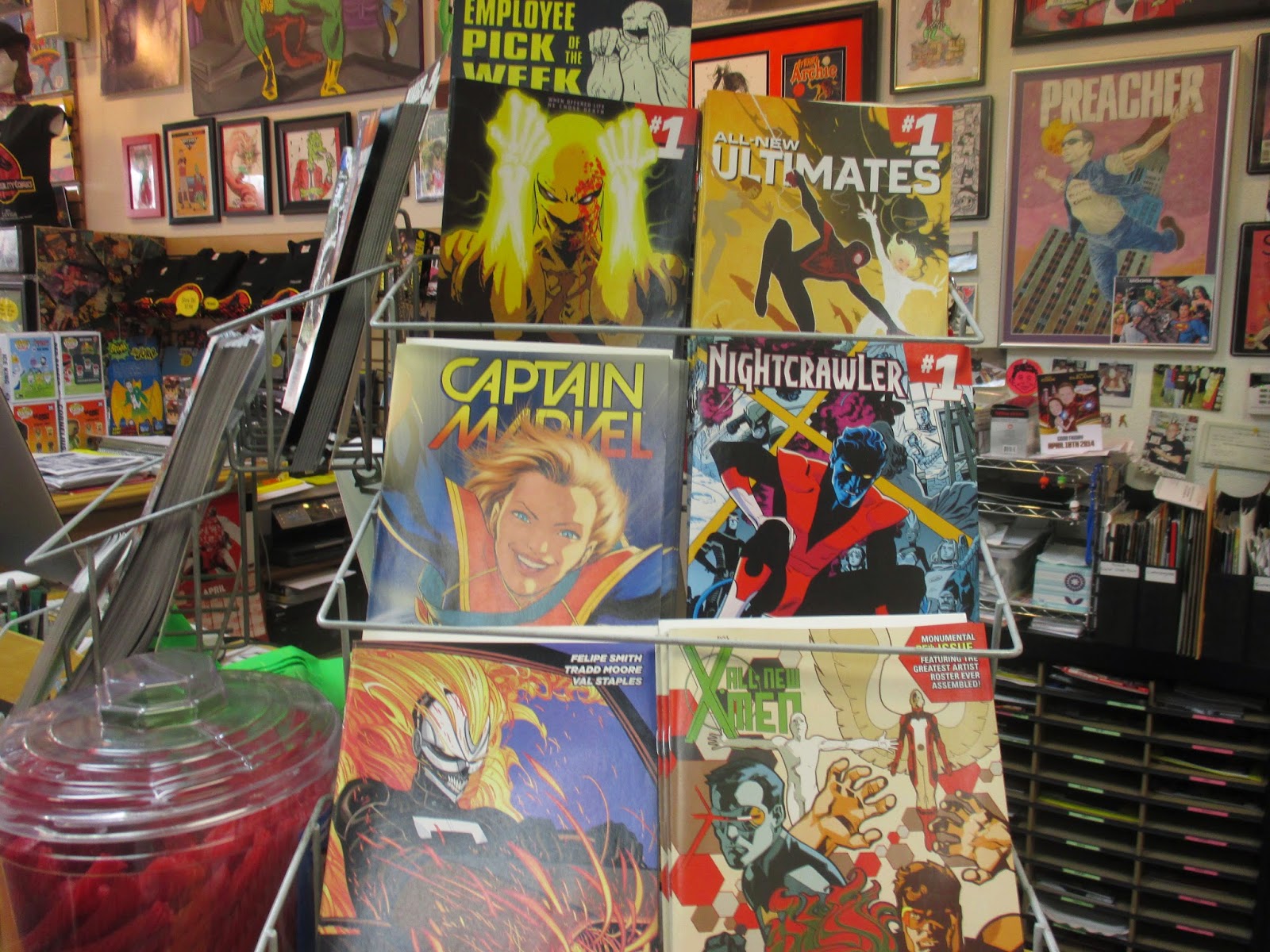 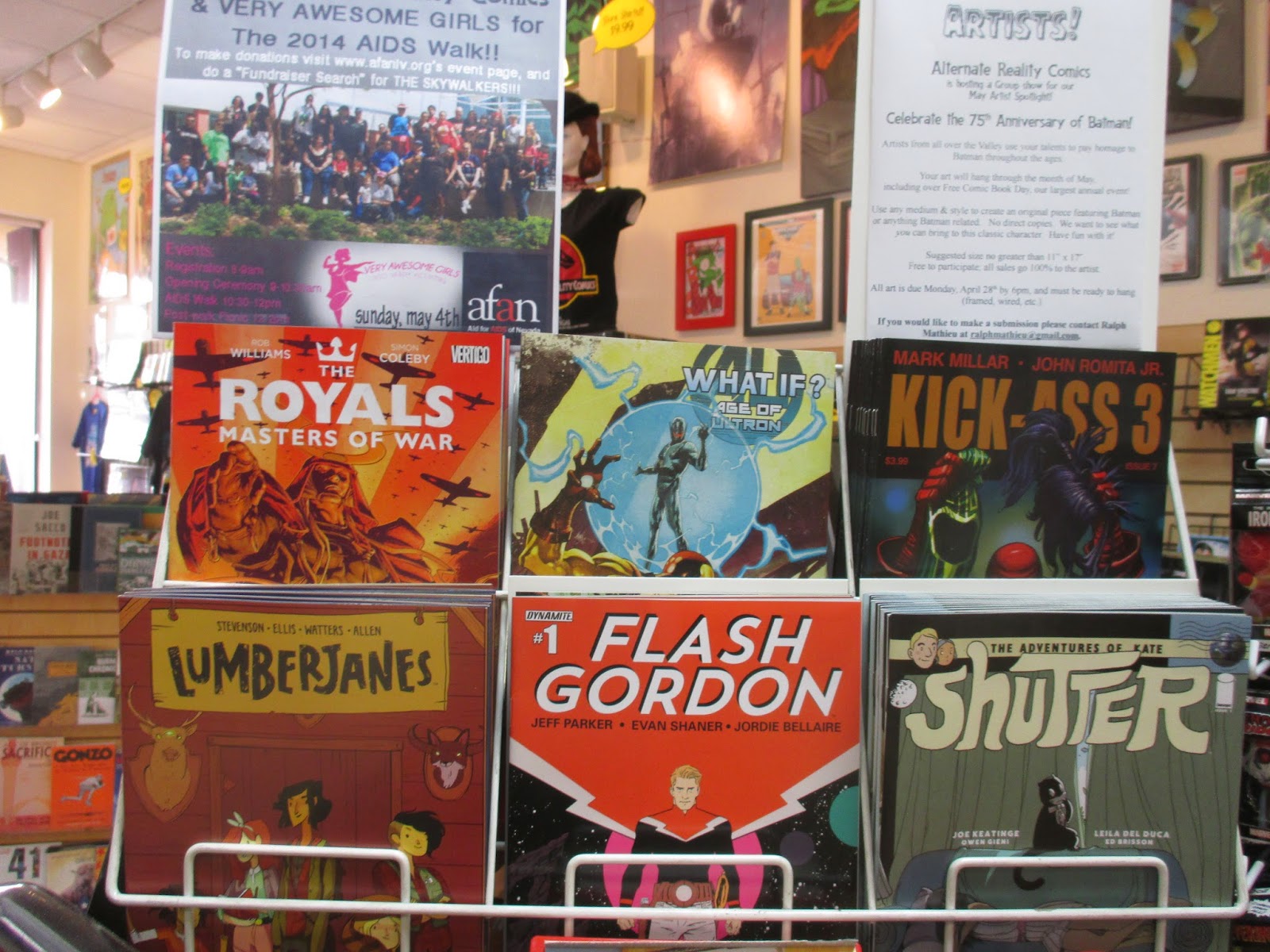 New Image series, Shutter, looks interesting, as does the new Boom! Studios' Limberjacks! Kick Ass' penultimate issue of the entire series! There's also a new Walking Dead (issue #125) and this is one of those, don't look at the last page until you get there (of course you shouldn't really do this with any comic - grin!)!
at April 09, 2014 No comments: 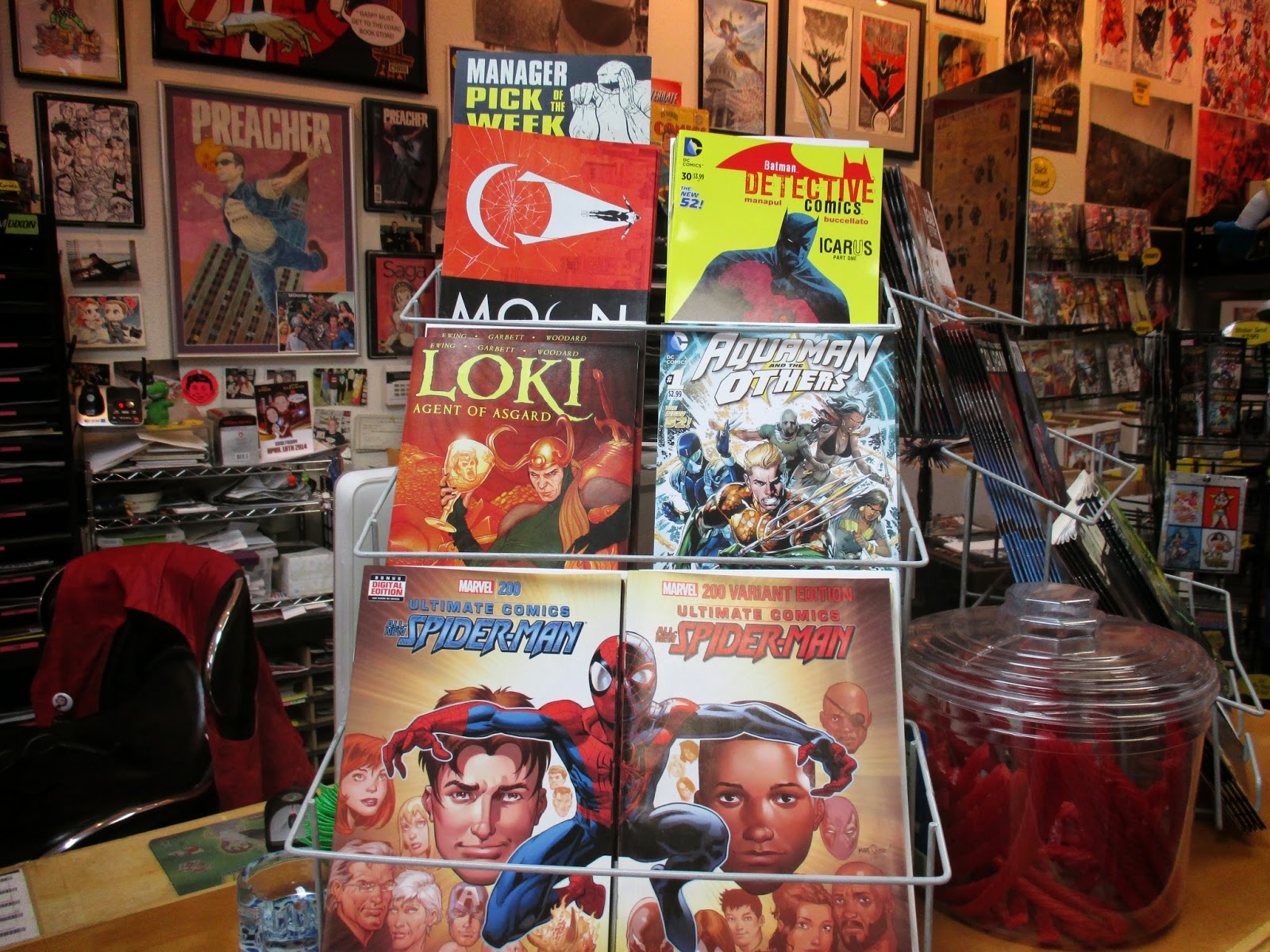 Warren Ellis' second issue of Moon Knight is just as charming as the first issue - great stuff, so good to finally have a good Moon Knight comic! The creative team of the New 52 Flash as moved on to Detective Comics and while I'm sad to see them leave Flash, their first issue of Detective is REALLY good! Ultimate Spider-Man #200 (shown here with both covers) is a Ultimate universe celebration of Peter Parker and is one of Bendis' strongest writing in some time - great character moments! While I haven't read the new Aquaman comic pictured above yet, it's supposed to set up DC's Future's end upcoming BIG comic that will introduce Batman Beyond into the DC universe! 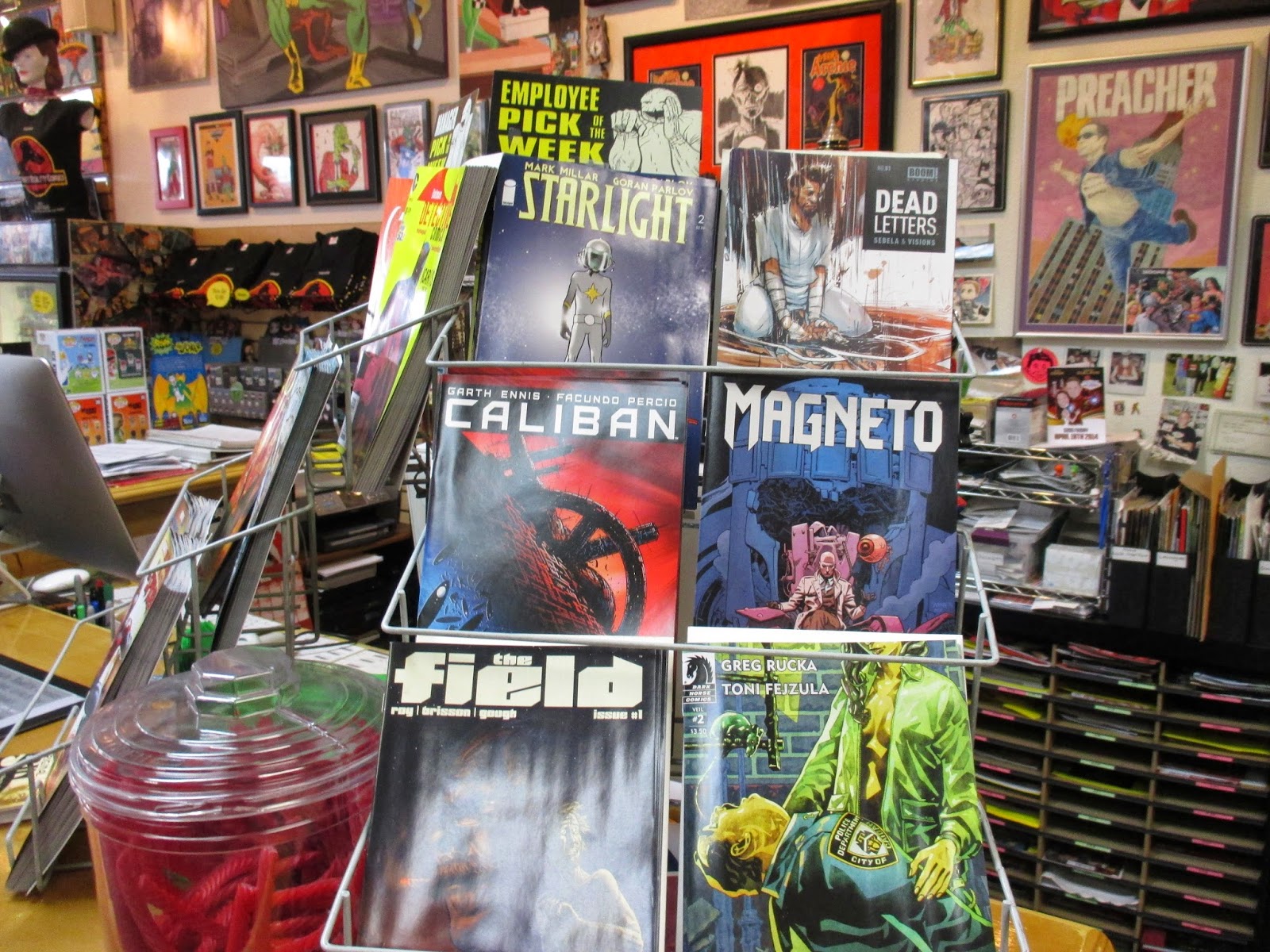 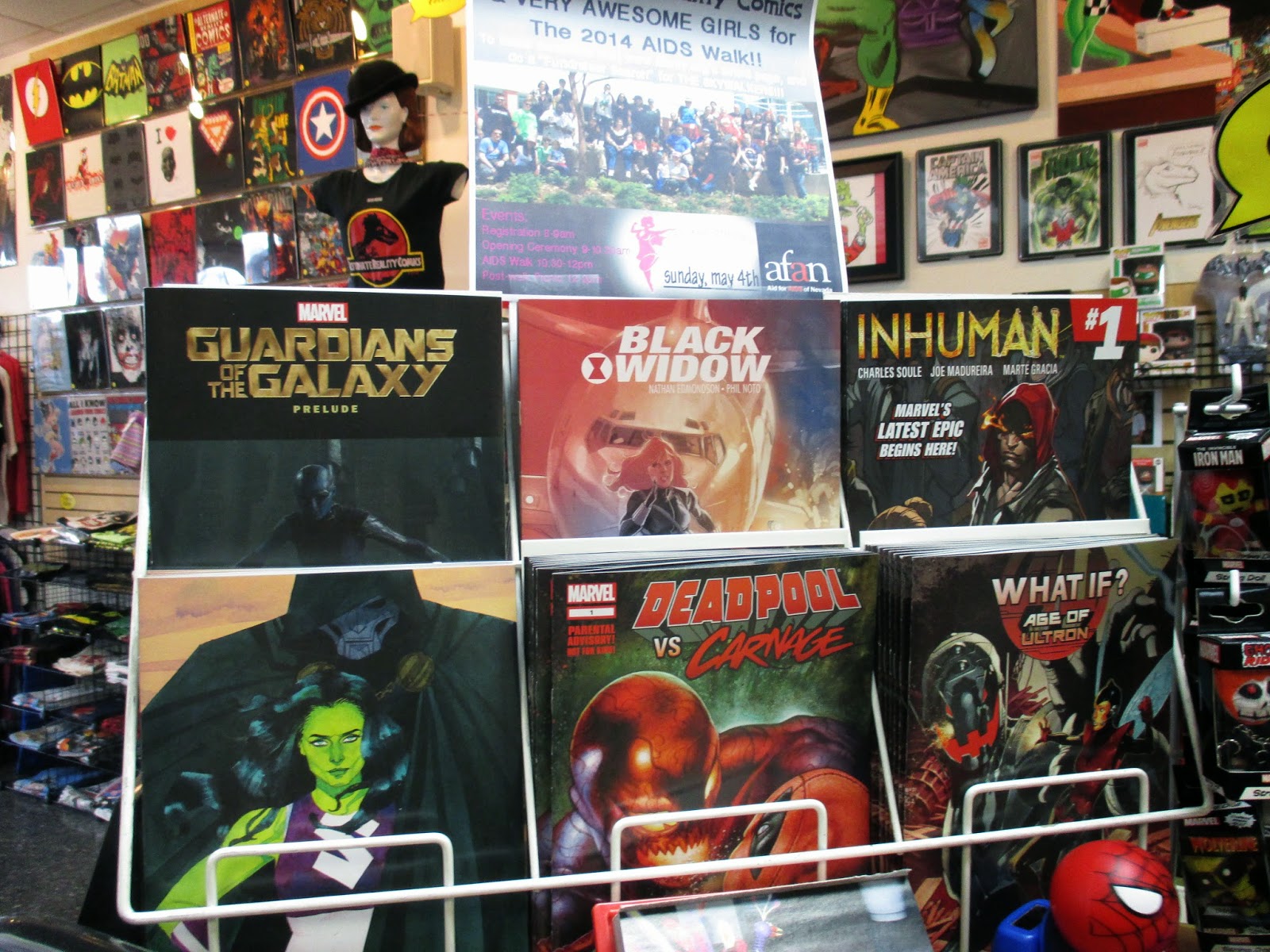 A new Guardians of the Galaxy comic by writers Abbnet and Lanning! She Hulk #3 is one of the best comics I've read so far this week, great new title! Inhuman finally starts and a new What If - What If Age of Ultron looks interesting! Also Action Comics, Fairest, Black Widow, Deadpool Vs. Carnage, other titles, I'm drawing a blank on because they're not in front of me, and a NEW club sheet for April, May, and June titles! And hopefully a lot of you can make this tonight... 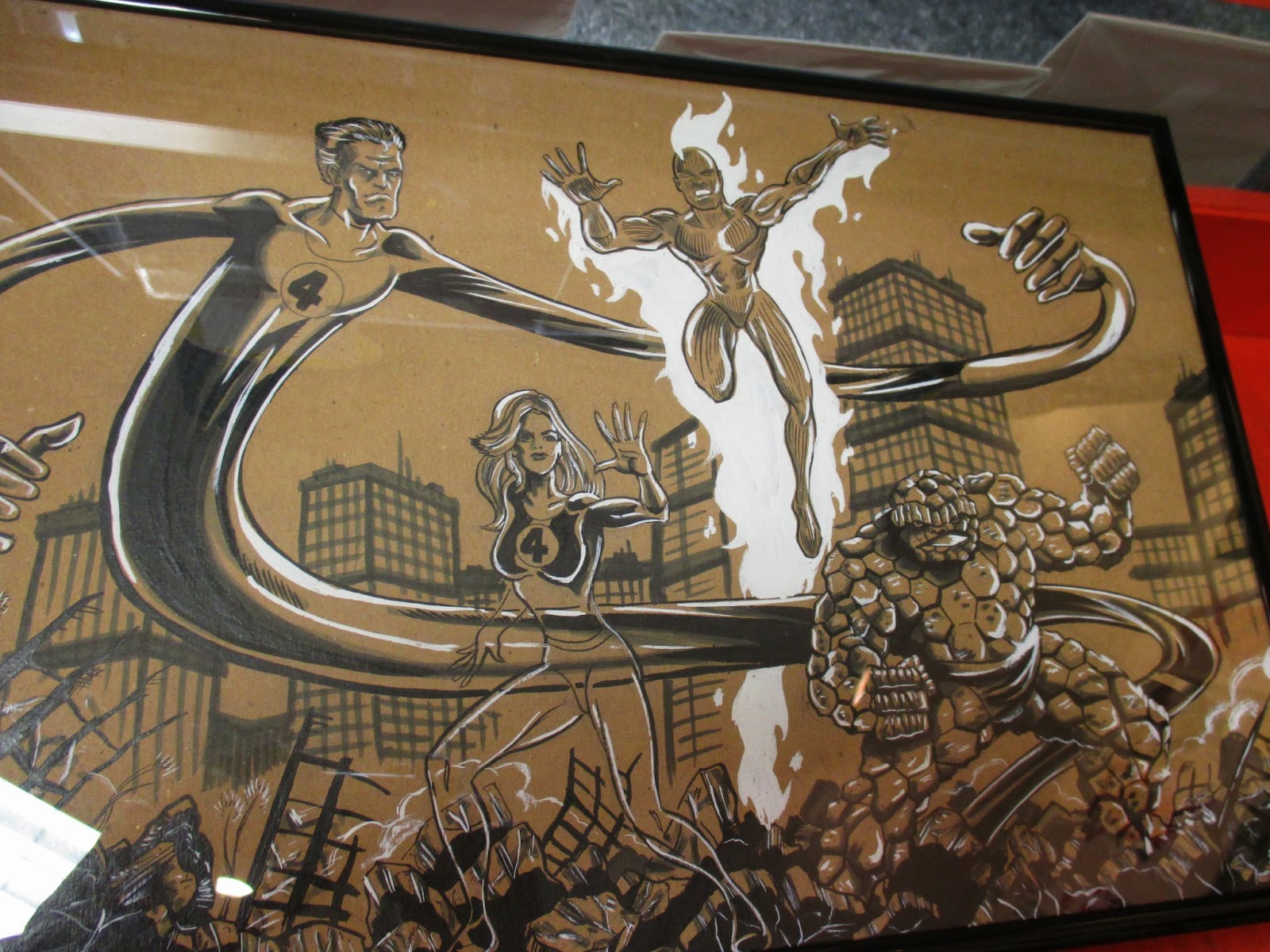 New local artist, Harrison Wood, will have his opening reception tonight from 5-8pm of his Artist Spotlight! There will be complimentary snacks, wine, and other beverages will you check out some great art, and visit with him and other cool art lovers that will be here!
at April 02, 2014 No comments: