Not The Israel My Parents Promised Me; Harvey Pekar & J. T. Waldman 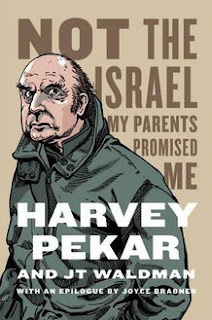 Not The Israel My Parents Promised Me is Harvey Pekar's last graphic novel and it seems to me to be a good bookend to the auto / biographical comics (American Splendor) and graphic novels he's written since the early 1970s. I certainly wish this wasn't Pekar's last graphic novel, but this book like his Cleveland, which was released a couple of months ago, were two works I heard him talk about when he and Alison Bechdel (Fun Home, Are You My Mother?) spoke at a presentation at the Clark County Library back in April of 2010 and when he died just three months later (July of 2010), I thought we'd not see these books, so I'm glad these two Harvey Pekar graphic novels were completed before his death.
Not The Israel My Parents Promised Me is Harvey Pekar's examination of the Jewish people's continuing struggle with their occupation of Israel as their state, expecially their continuing conflicts with their neighbors, Palestine. Harvey Pekar was raised in a Jewish family, but he fairly early on in his life, didn't see the Jewish state of Israel to be their land claim right as all (or a majority) of Jewish people do. Throughout Not the Israel My Parents Promised Me, Harvey Pekar and artist J. T. Waldman present a historical lineage of the Jewish people and the conflicts between Israel and Palestine, as well as a record of Pekar's personal history growing up Jewish and how he developed his differences. Not The Israel My Parents Promised Me presents different sides of the Israel and Palestine and Jewish perspectives that I've not been exposed to previously and I'd guess even a lot of Jewish people aren't aware of the history outlined in this graphic novel.
at July 30, 2012 No comments:

The Song of Roland; Michel Rabagliati 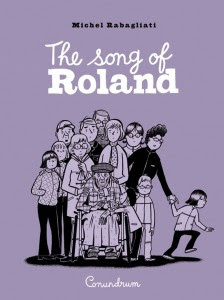 The 2009 multiple award-winning graphic novel, Paul a Quebec, has finally been released in the U.S., newly titled, The Song of Roland (which I think is a better title). The Song of Roland is written and drawn by Michel Rabagliati and is a beautiful sequential art narrative about Roland's life and death, that is sad, but at the same time shows a great life lived of a person (Roland) who gave a lot to his family in many ways and was given much in return. The Song of Roland isn't sappy or emotionally manipulative in any way, rather it just resonates as an honest portrait of a close-knit family.
at July 20, 2012 No comments: Last week, a pleasant surprise of a comic came out from Image called, Wild Children, by Ales Kot, Riley Rossmo, Gregory Wright, and Clayton Cowles. This is one of those comics that is better to just experience for yourself rather than being told what it is about, the only thing I'm going to say about it is it is a kind of call to action. I'd also like to share the following quote that starts off Wild Children: "I have never let my schooling interfere with my education." Mark Twain - And a line one of the characters says within Wild Children: "Did you ever think how the comics in your house are just like ecosystems at different ocean depths?" 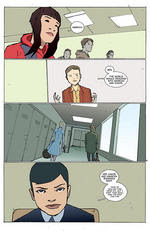 A great week to be a Darwyn Cooke fan! 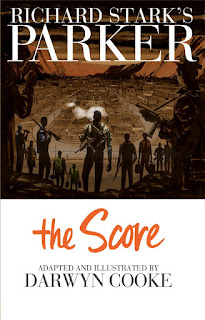 This week the third Parker novel has been adapted by master cartoonist Darwyn Cooke, called The Score, and as with his other Parker adaptations, The Hunter and The Outfit, you won't find a better crime fiction sequential art production. 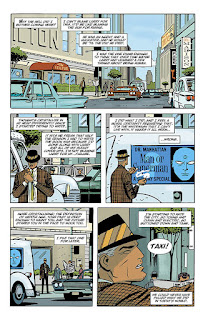 The Parker novels / graphic novels were written by Donald Westlake under the psuedonym, Richard Stark, and they are about a master con man, Parker, who doesn't suffer fools or hair-brained schemes. That's really all you need to know going into any of the Parker novels / graphic novels, with the newest Cooke adaptation, The Score being about a heist of an entire small town (do things go wrong, with all of the variables involved with such a big plan? - well I'm not going to say, of course!). 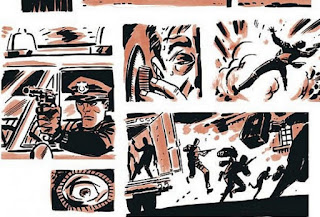 Also this week from writer, artist, colorist, Darwyn Cooke, we get the second issue of Before Watchmen Minutemen #2 and if you read the first issue, you already were eagerly awaiting the following issues, but if not, check out the interior page (which is the second image here in this entry, blogger is acting up and not importing images in the correct order) for an example of a cartoonist at the top of his craft! Both issues of Cooke's Minutemen have enough content and cartooning skills per issue to fill three normal comics!
at July 13, 2012 No comments: 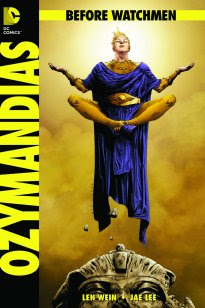 Okay, I'm going to sound like a broken record here, but Before Watchmen Ozymandias, by Len Wein and Jae Lee and June Chung is another top notch sequential art production (so that makes five out of five Before Watchmen first issues that are amongst the finest comics out there today)! Truthfully, I was a little concerned with how good the writing by Len Wein on Ozymandias would be, because while I've loved his superhero comic book writing since the 1970's, I don't recall any particular story that he did that had any real weight, beyond just being entertaining (and I don't mean this as a slight because there's nothing wrong with just being a consistently entertaining writer). I'm happy to report that from page one of Before Watchmen Ozymadias #1, Len Wein proves he's more than up to the task of writing characters and stories within the Watchmen world. This first issue beautifully sets the groundwork for exploring Ozmandias' past and what makes him tick (pun probably intended - grin!) and I'm glad that this Before Watchmen mini series will be six issues in length (most of the other ones are just four issues long). 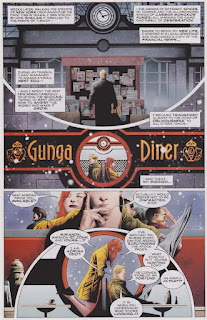 The first thing anyone who just casually flips through Before Watchmen Ozymandias will notice about this comic is how beautiful the art and coloring is. Those already familiar with Jae Lee's art over the years, especially on his Inhumans maxi series and his Dark Tower adaptations, already know what a master artist Jae Lee is. But with Before Watchmen Ozmandias #1, Jae Lee has turned up his artistic prowess up considerably and a HUGE part of how great this comic looks is due to the increadibly lush coloring by June Chung (I think this is the first time she's colored Jae Lee's art). Seriously, Jae Lee's art and June Chung's coloring has a beauty on par with the sequential art lyricism of P. Craig Russell and J.H. William III's art and like with these aforementioned artists, Jae Lee always looks for diffierent approaches to conventional comic book story-telling and layout. Before Watchmen Ozmandias #1 gets the Ich Liebe Comics! HIGHEST recommendation!
at July 05, 2012 No comments: