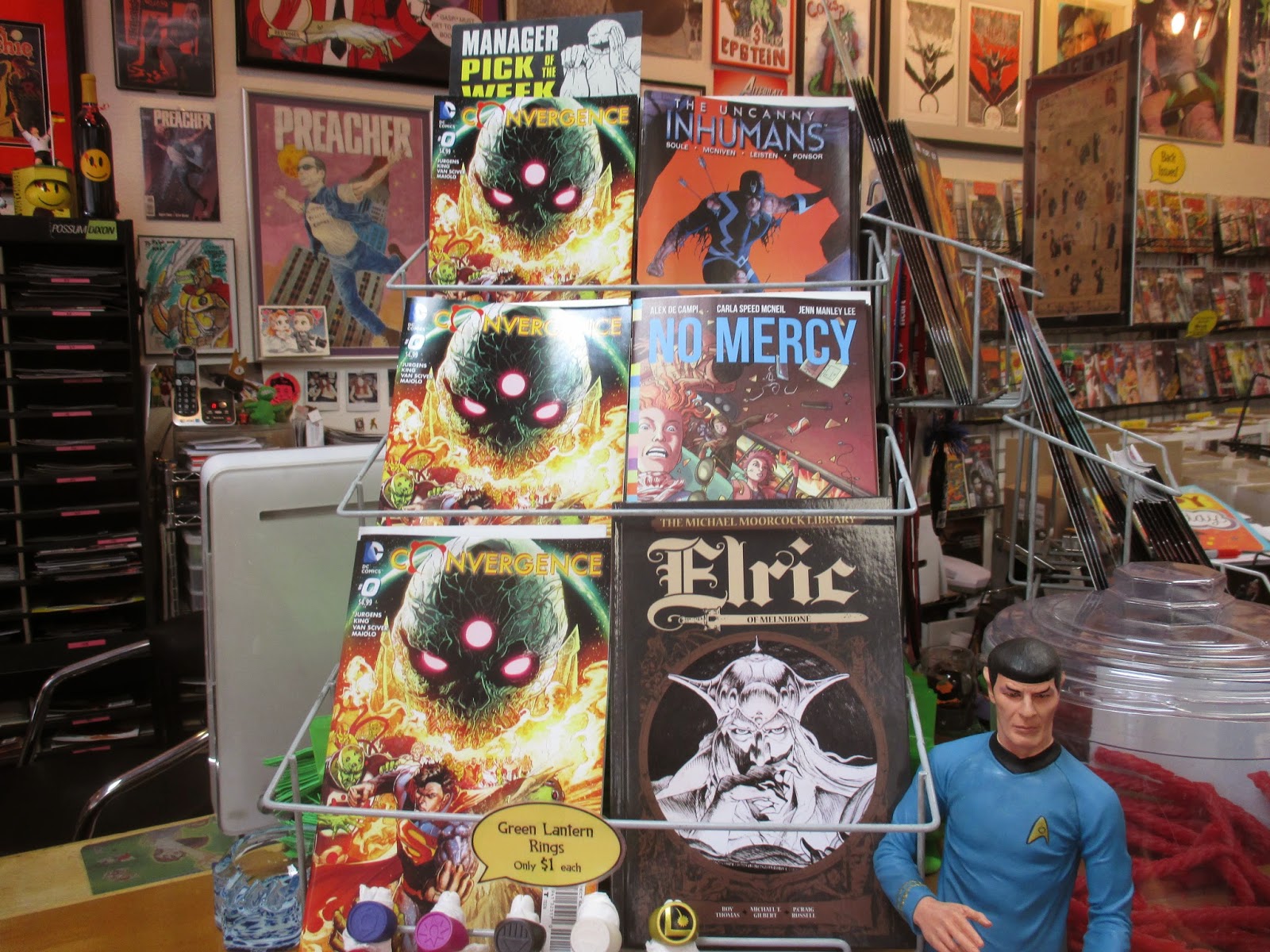 Convergence starts today!! Art by Ethan Van Sciver! This looks like it has the making of turning Braniac into one of the very evilest of DC villains! Charles Soule & Steve McNiven on Uncanny Inhumans #000 (yes, that's the number, after these three photos, look for some info on my new club sheets for April, May, and June titles)! Carla Speed McNeil (Finder) is one of my favorite artists and she draws this week's new Image title, No Mercy! One of my other favorite artists, P. Craig Russell's Elric is back in print in a new handsome hardcover volume! 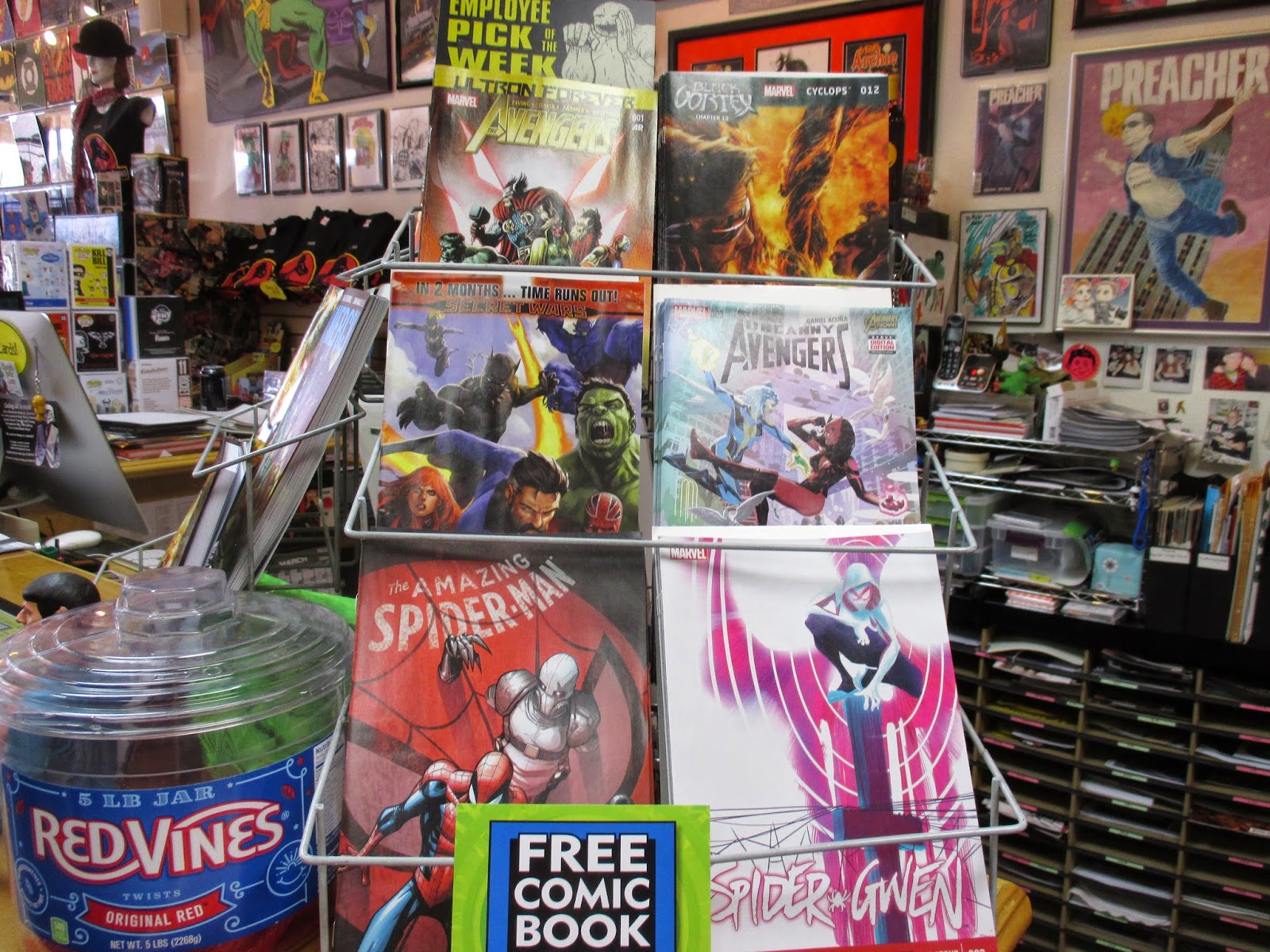 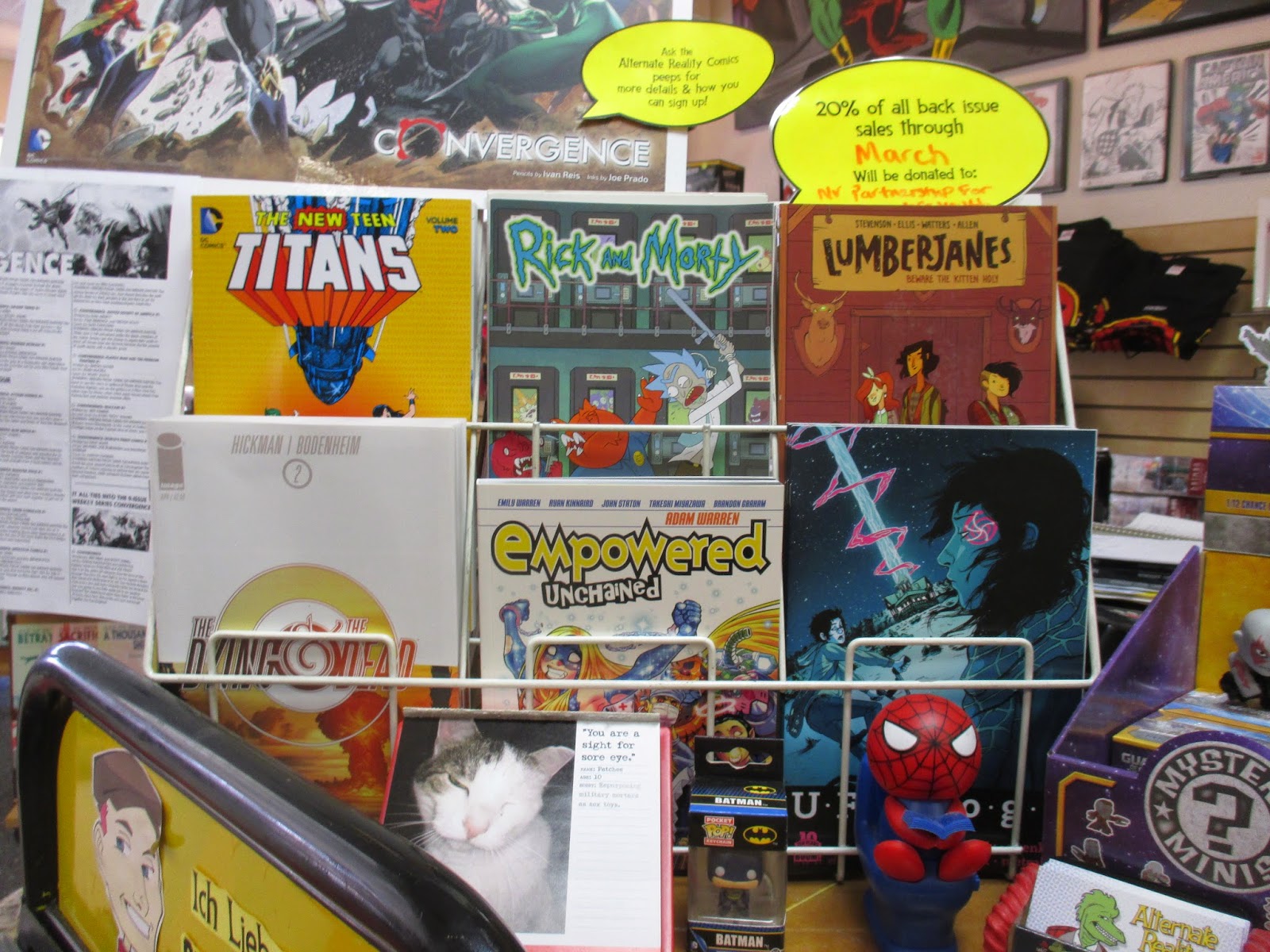 Second issue of Hickman's The Dying and The Dead (we all loved the first issue, right!?)!

So Marvel released their Marvel Previews for their June shipping titles this week (it was supposed to be out last week) and that means our club sheets for April, May, & June titles is ready to be filled out. This was probably my hardest club sheet that I've made in my 20 years of the store! So many changes, both with DC and Marvel, but with Marvel, there's waaaaaaaaay more questions than answers on what these titles are or what they're doing after Secret Wars (which looks to be going through September). I realize that theirs a lot of titles to choose from and this makes filling out the sheet for what titles you want overwhelming, but filling the club sheet does help me in not having to use the extra big dartboard when placing my orders trying to guess what people want. Here's the most info I've seen on the Secret Wars titles - google IGN Secret Wars titles.

Tonight!! Victor Moya's Artist Spotlight Opening Reception - hope a lot of you can make it, you won't be sorry! 5-8pm tonight, complimentary snacks, wine, and other beverages will be served too! 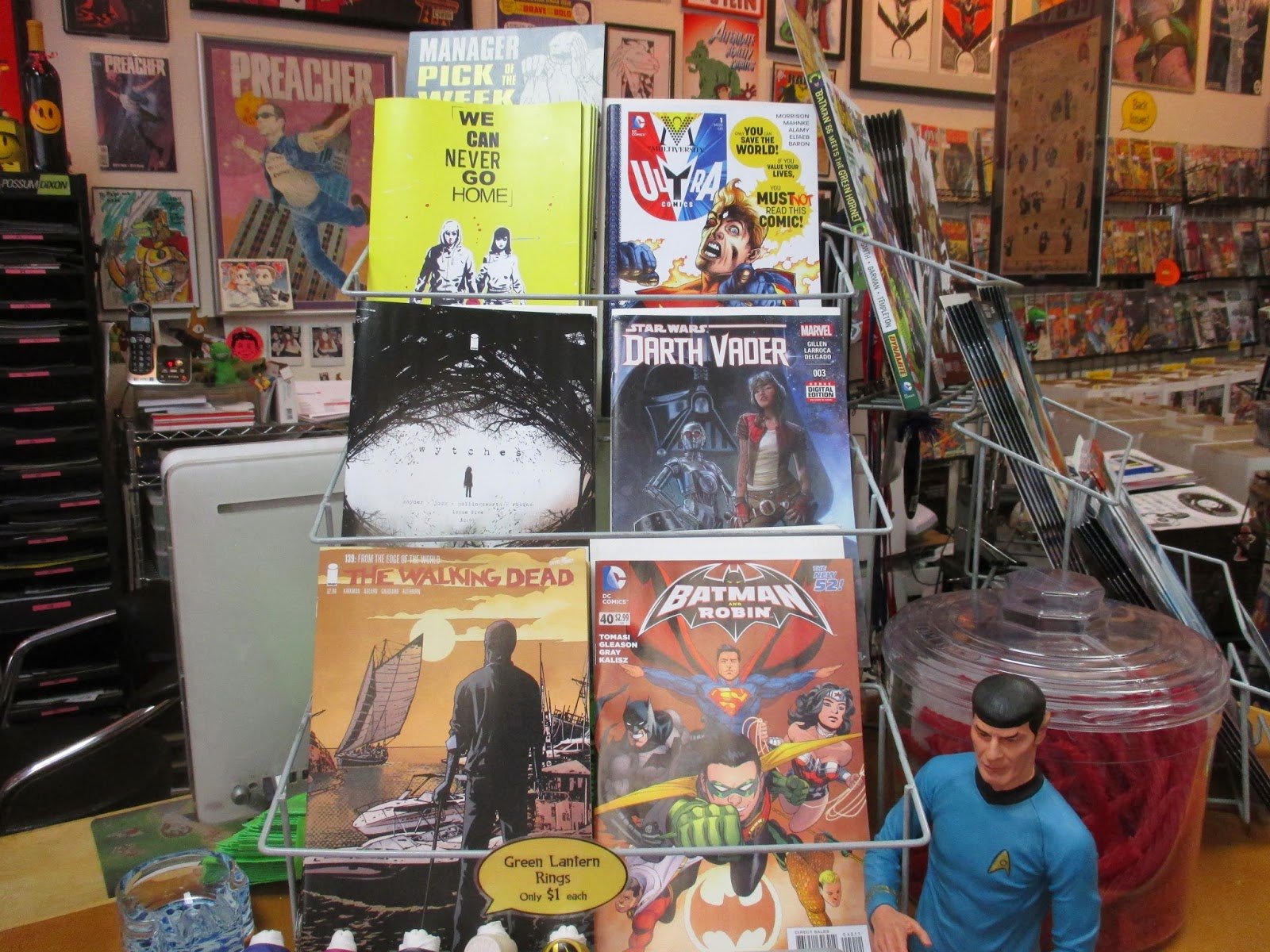 I can't decide what my favorite comic is this week, We Can Never Go Home Again or Mutiversity Ultra Comics - so I call a tie! We Can Never... is kind of like if the comics Stray Bullets and Deadly Class had a wonderful baby! This week's Multiversity is illustrated by Doug Mahnke and is an awesome meta / breaking the fourth wall story! This week's Walking Dead is really a beautiful issue and I'm not saying that ironically! Can't wait to read Darth Vader #3 with the introduction of some new characters! 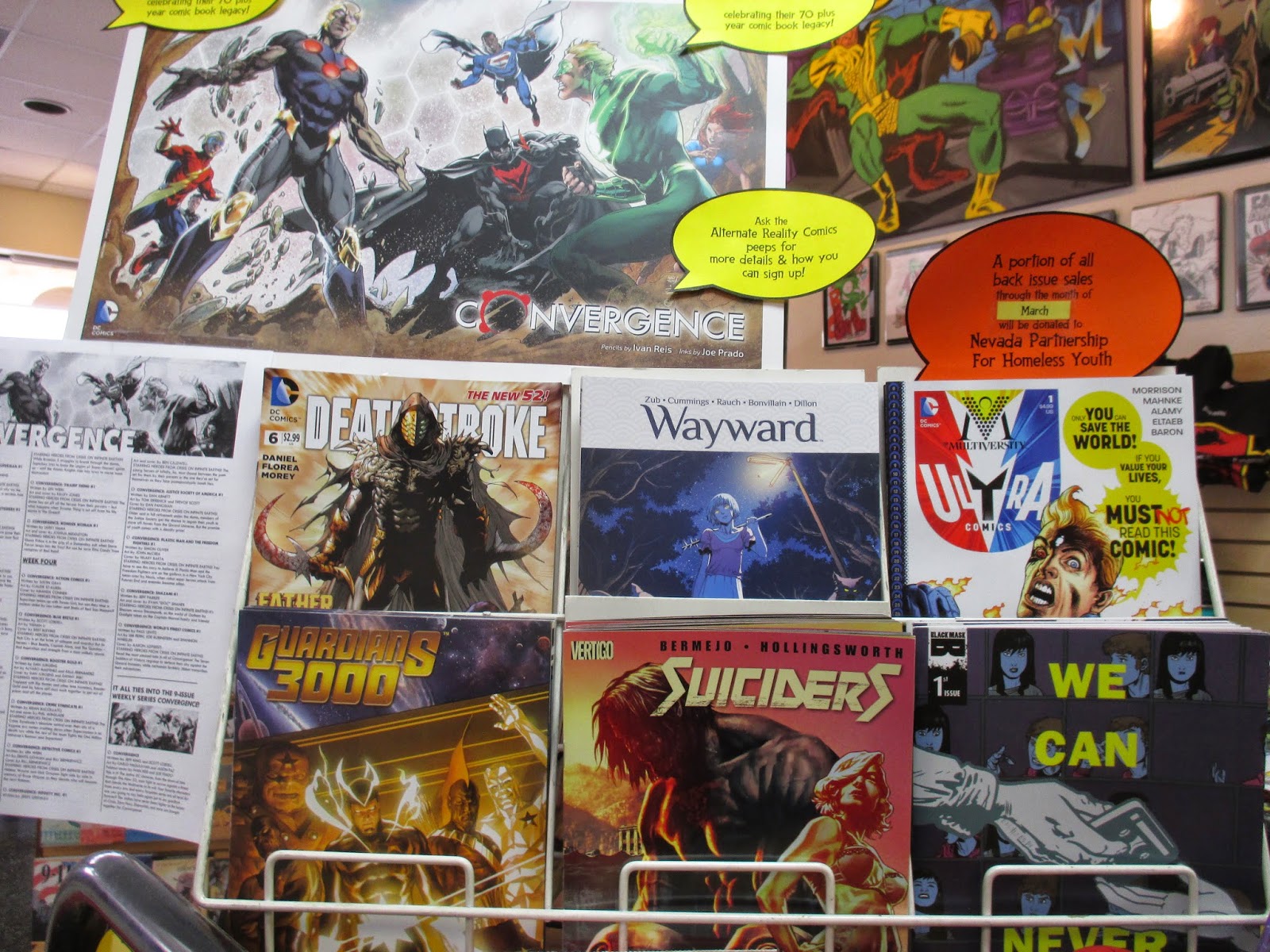 One week away for Convergence! Seriously, this looks like a lot of fun Ethan Van Sciver draws the #0 issue! 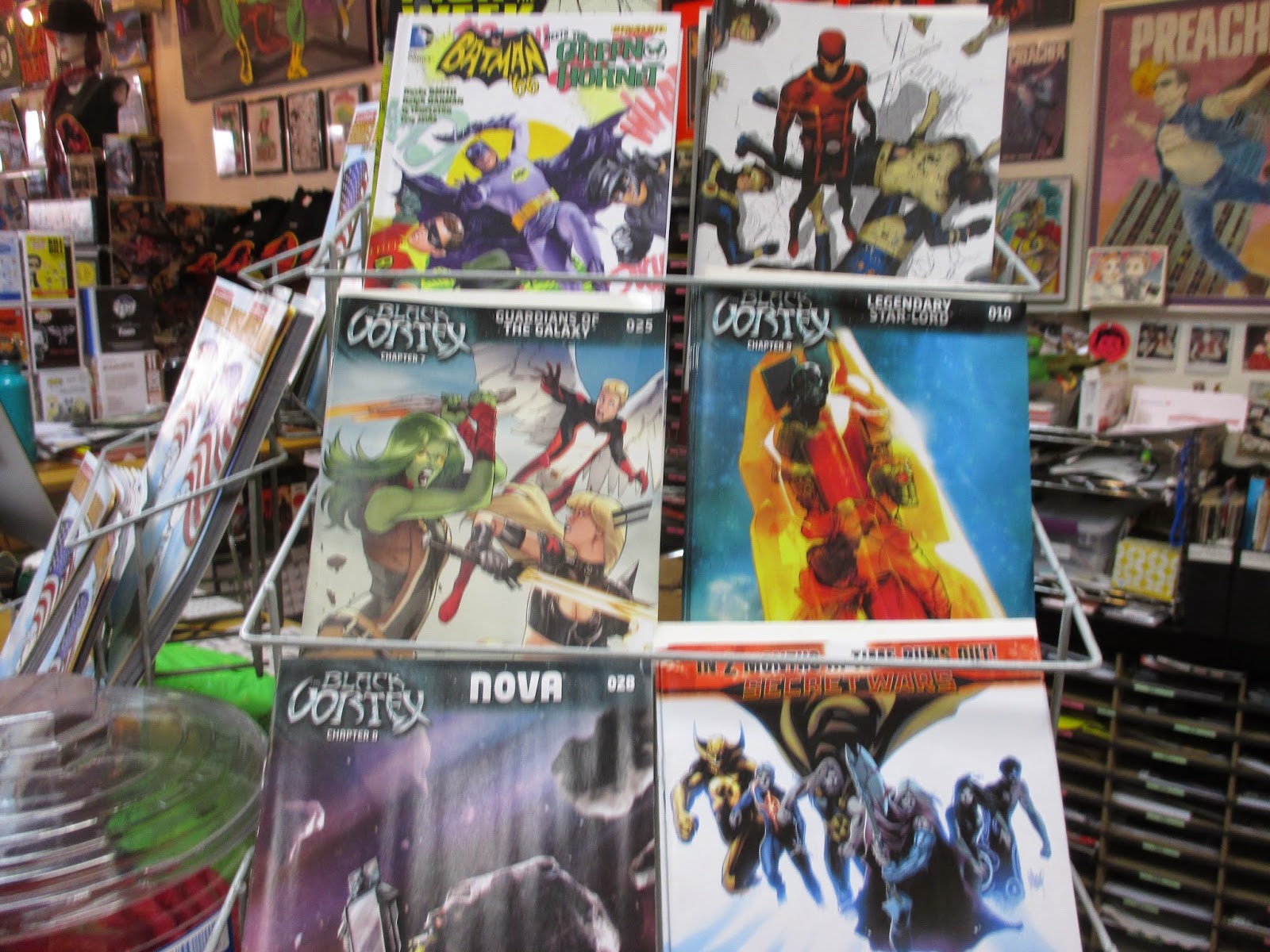 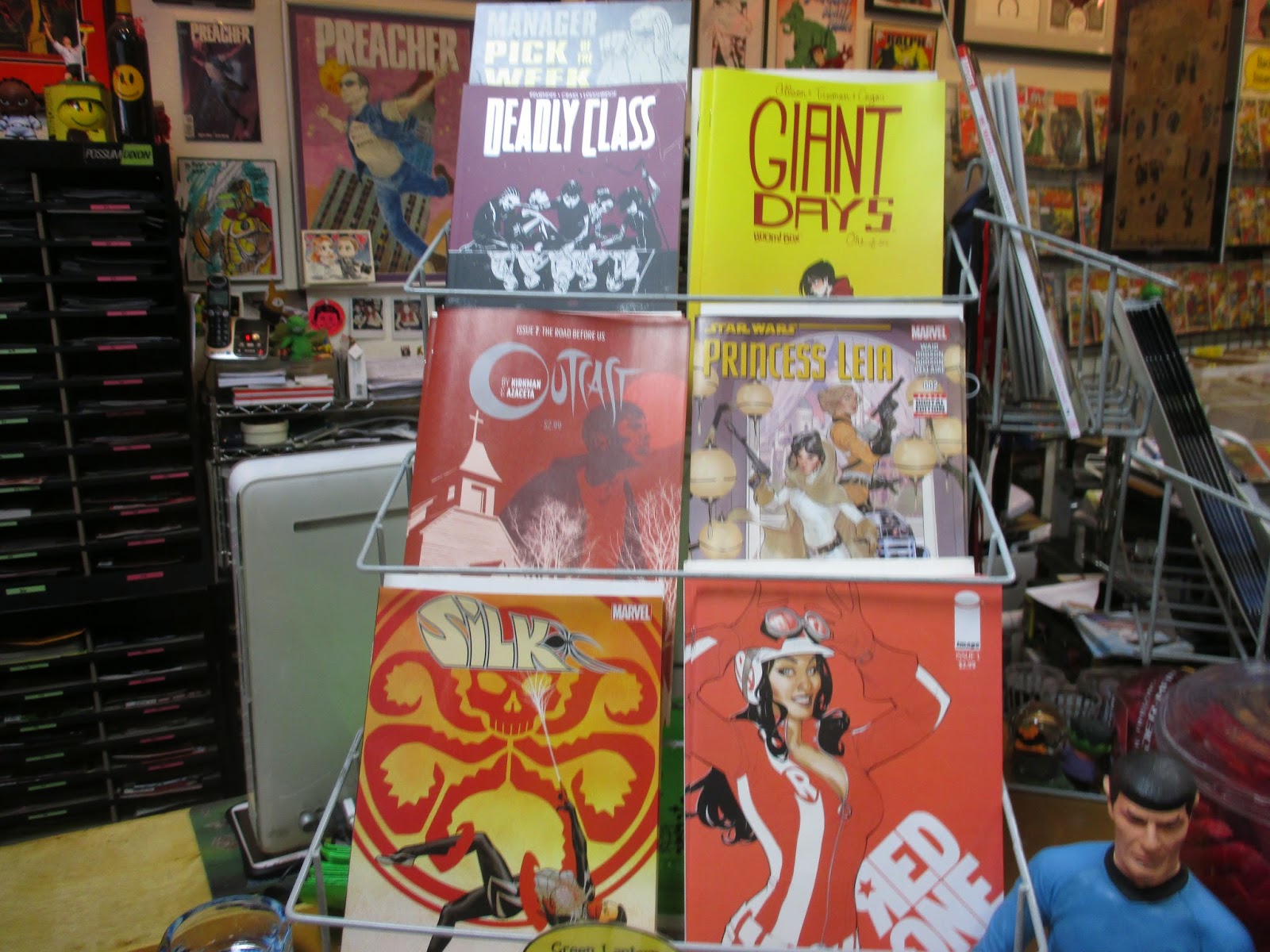 Silk is rapidly becoming one of my favorite superhero comics! Two Terry Dodson drawn comics this week, Princess Leia and Red One! 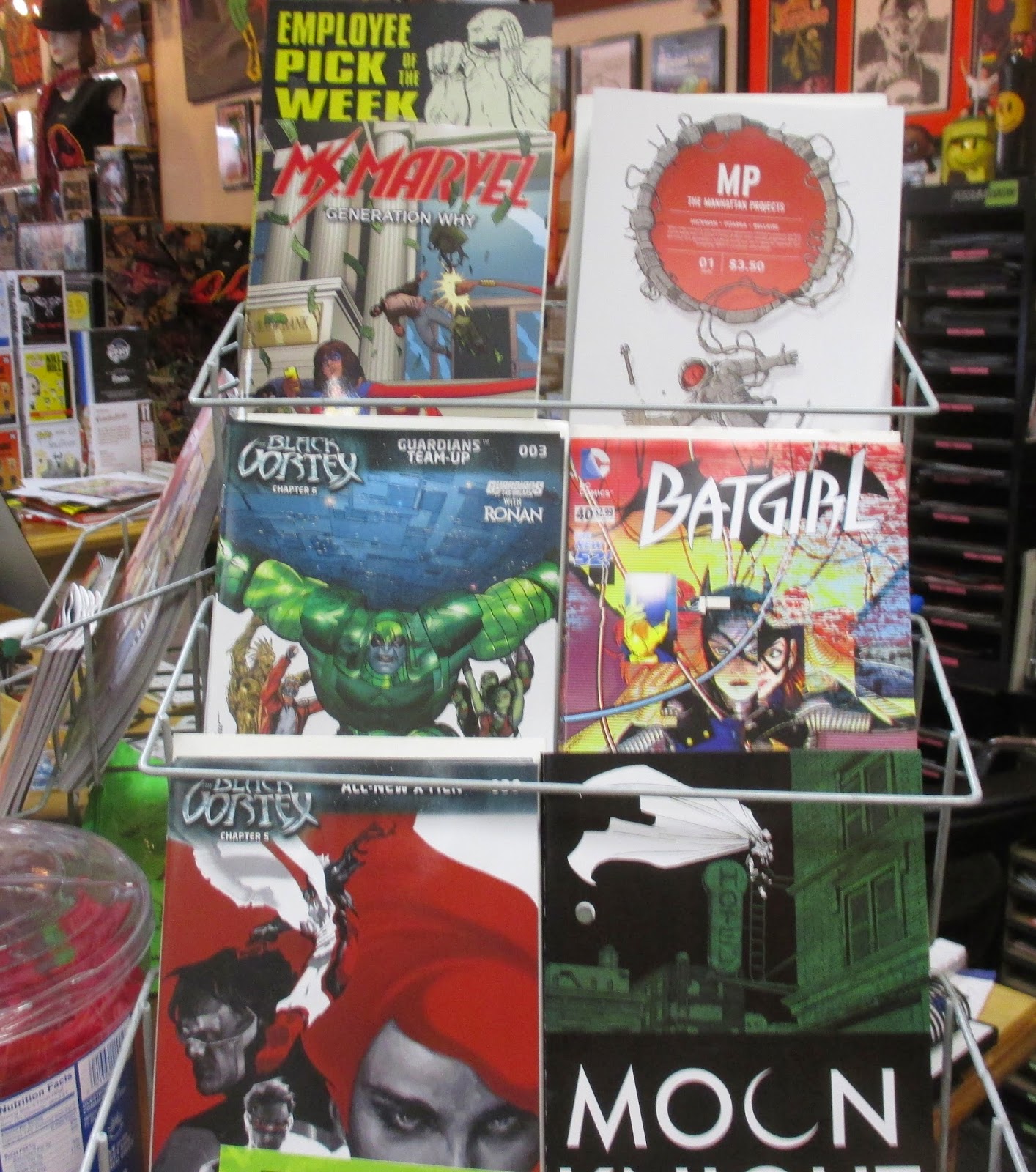 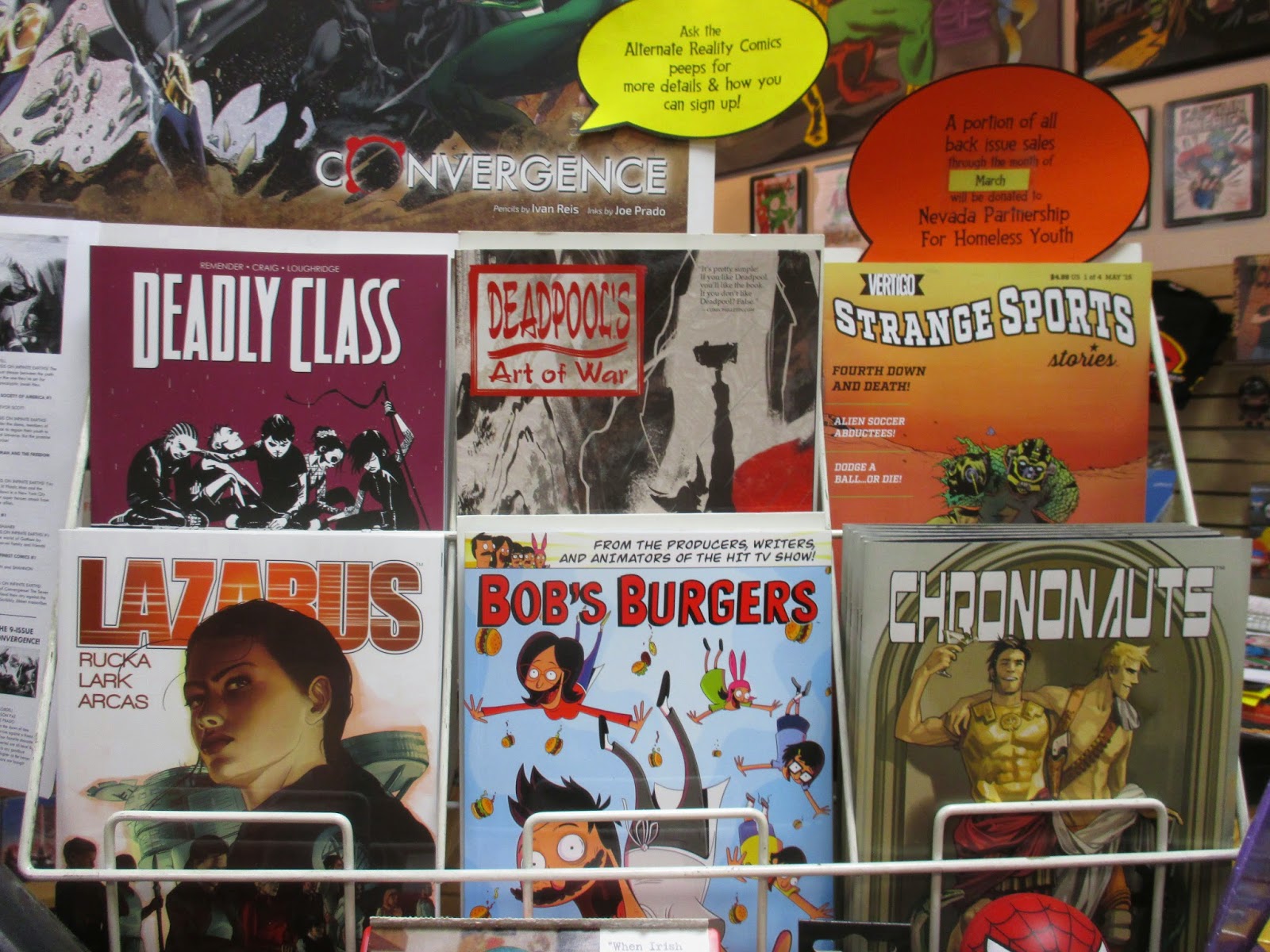 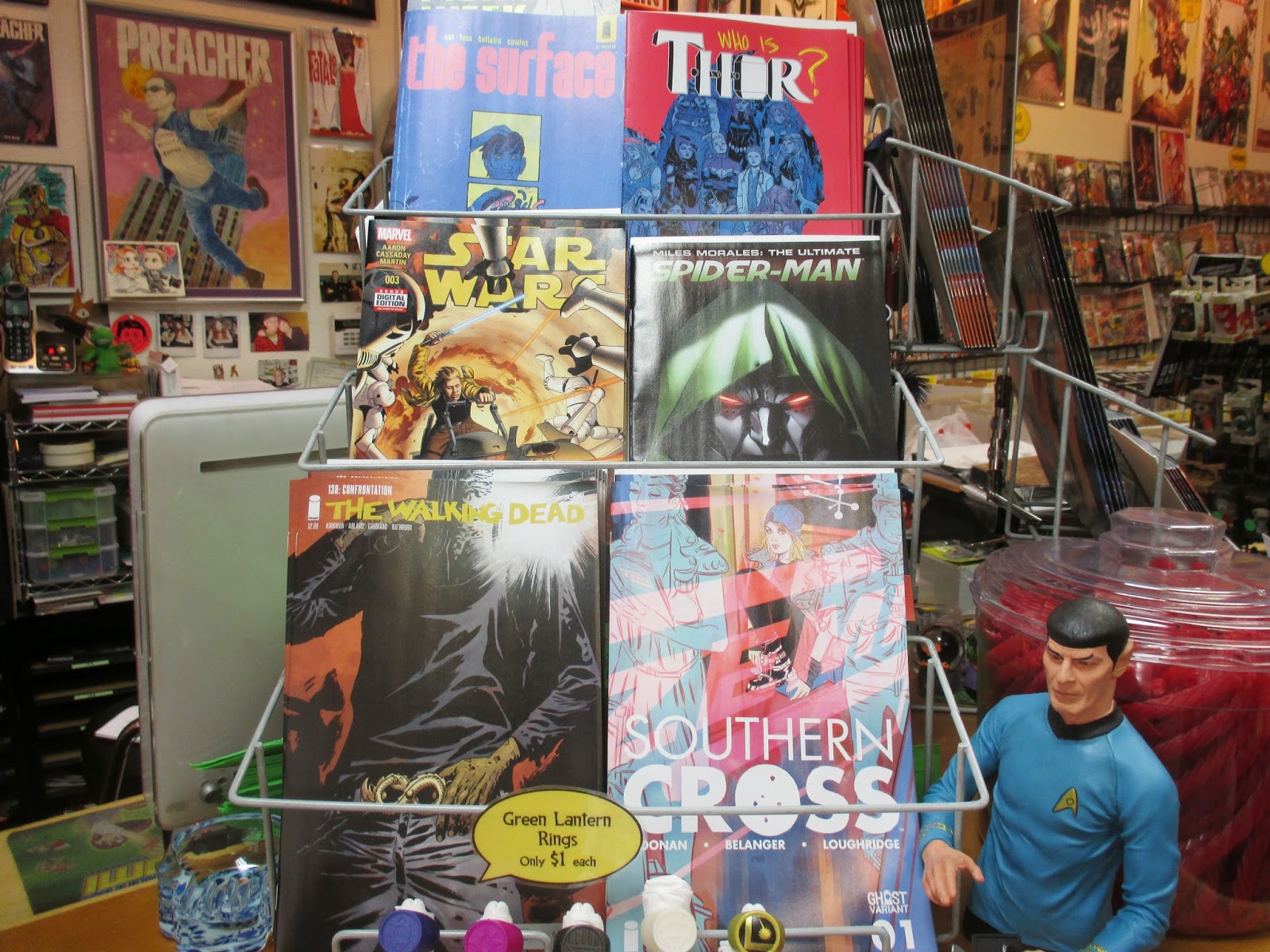 If you want to get your mind blown without resorting to popping pills, I highly recommend Ales Kot & Langdon Foss' new Image comic The Surface! Full of big ideas and beautiful art! 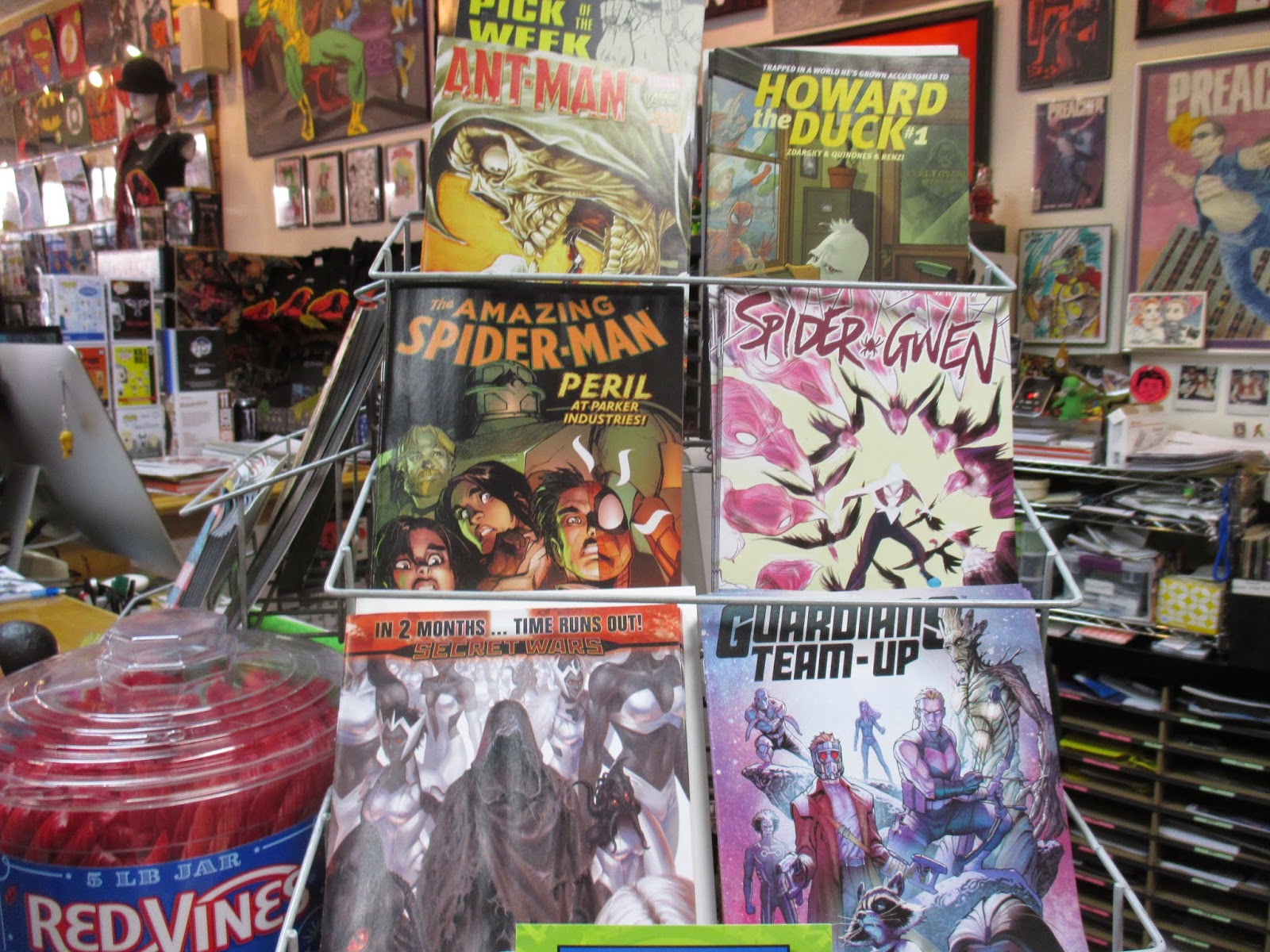 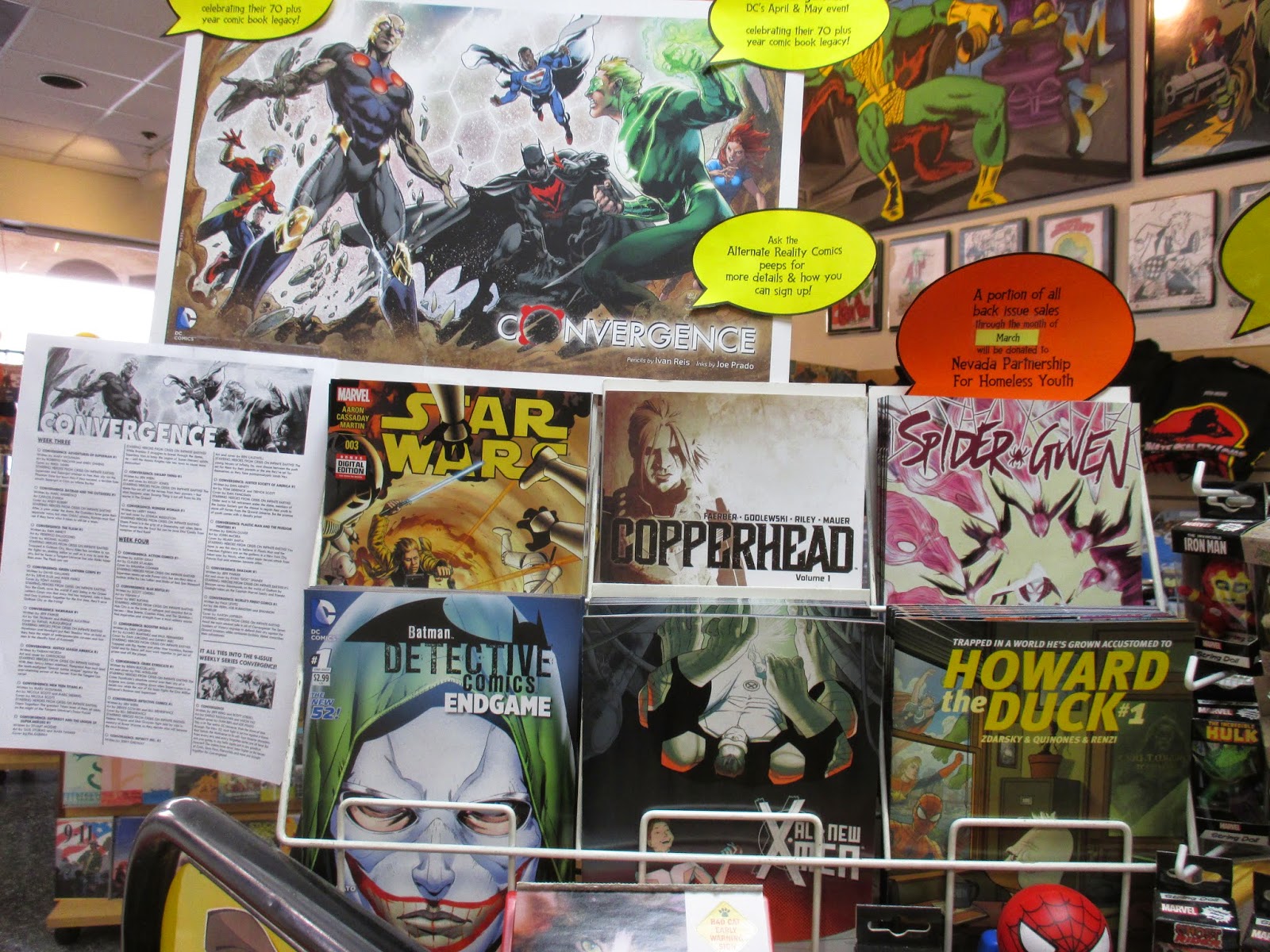 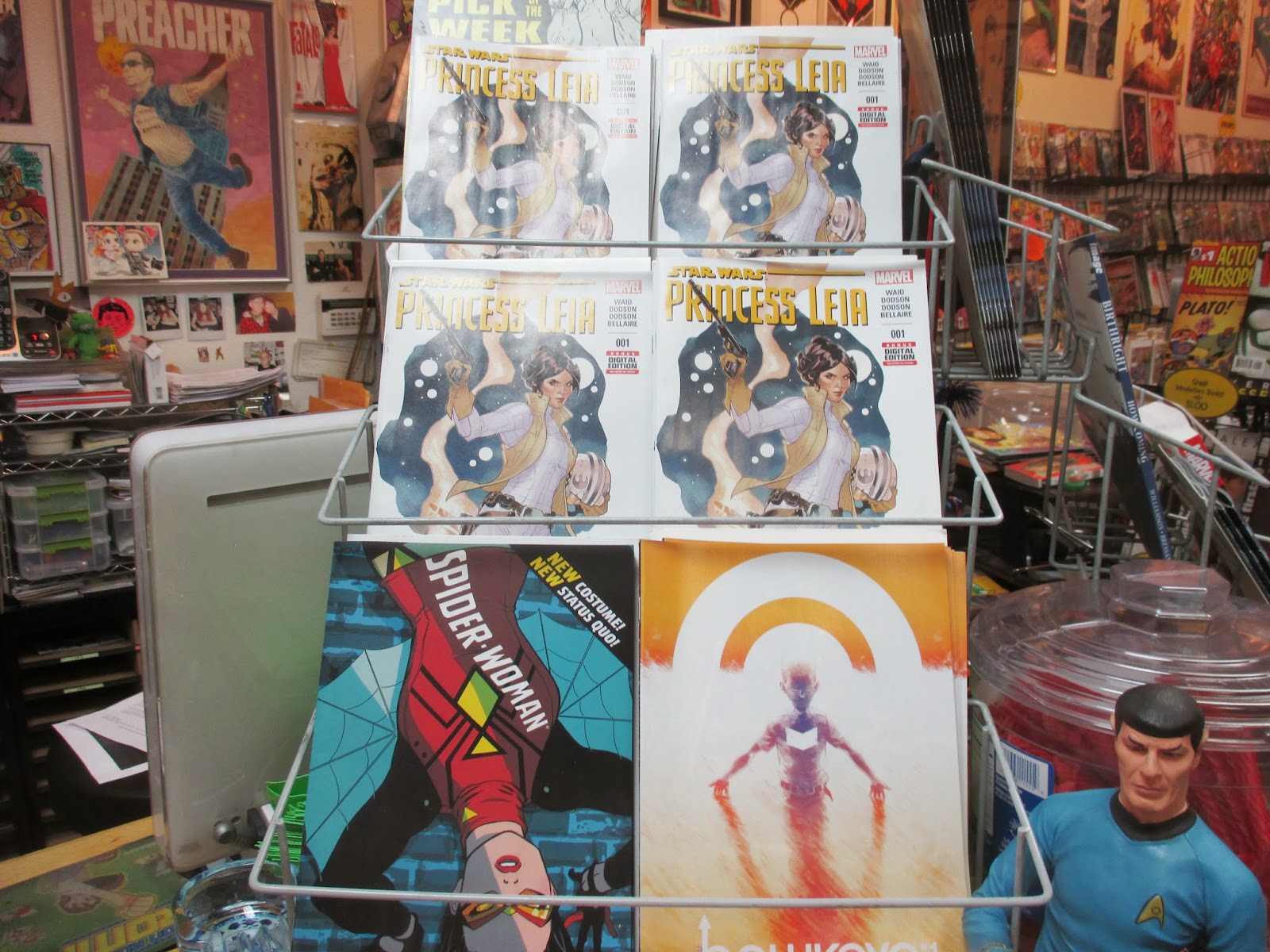 Lots of AWESOME out today!! And we have an Artist Spotlight Opening Reception featuring local artist, Sig Sig that is literally out of this world! More details below!! 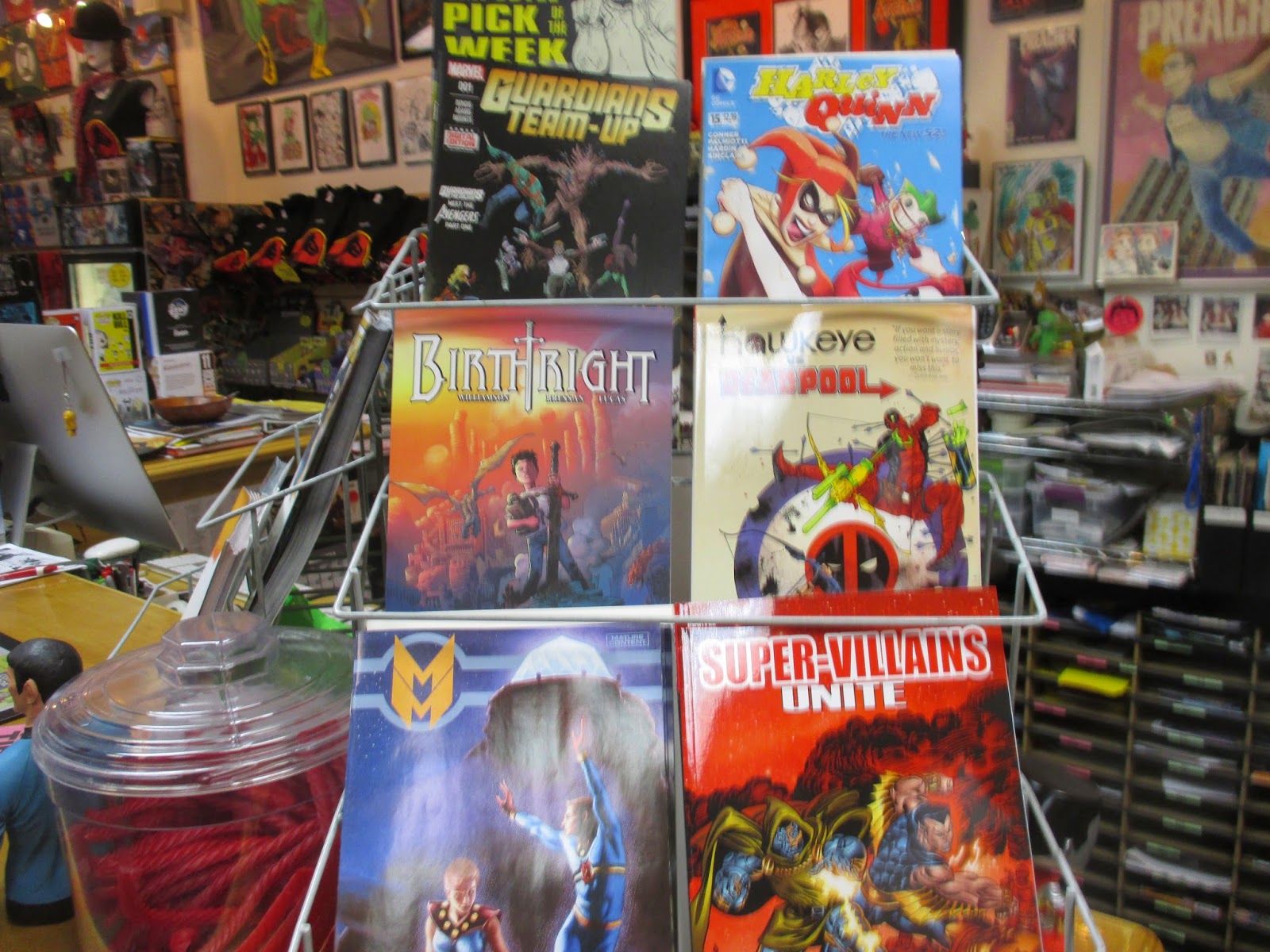 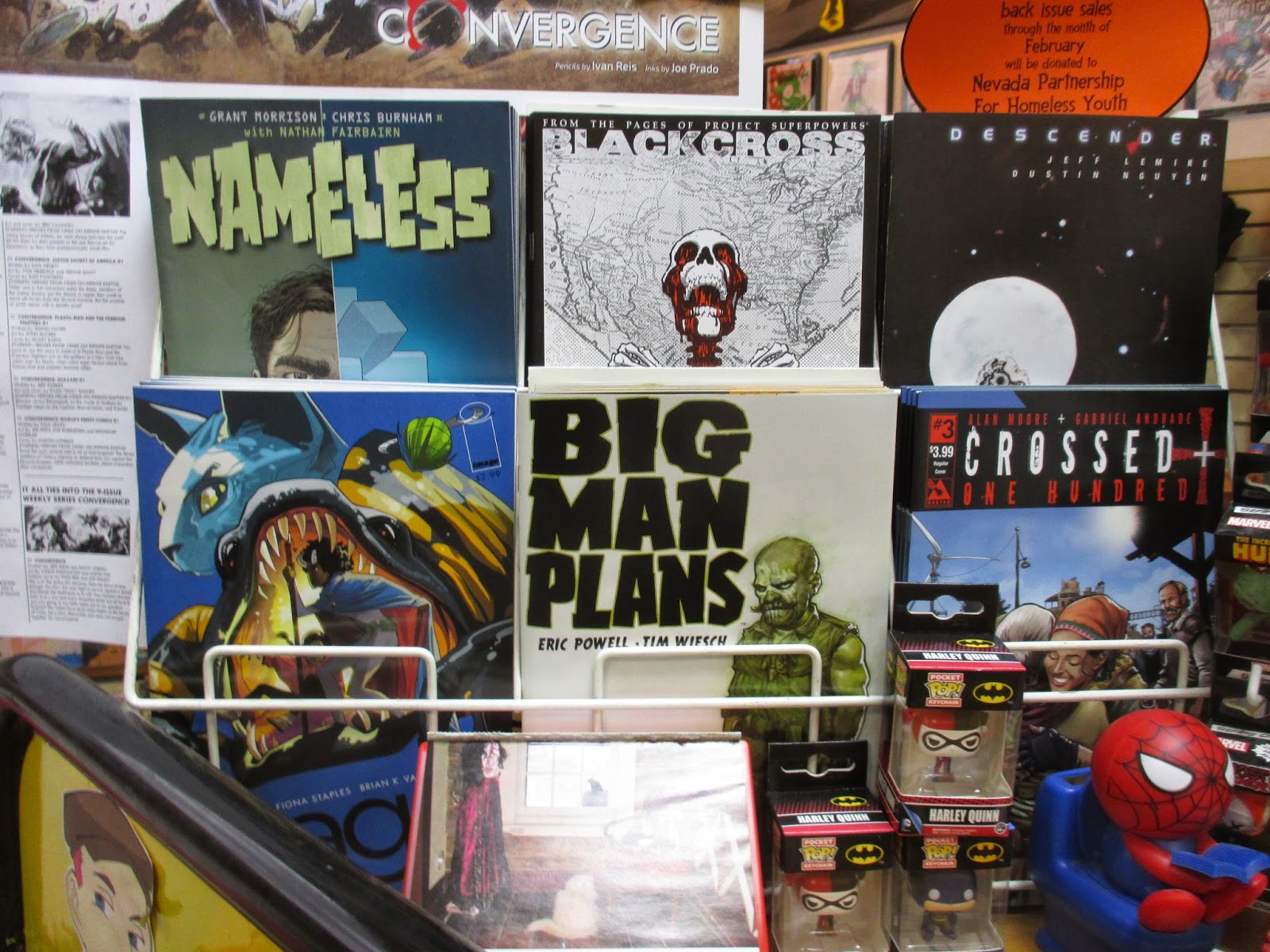 Sig Sig, is one of Las Vegas' most imaginative artists and Alternate Reality Comics is happy to share with everyone his newest phase of his art, his Out of Our World paintings of the cosmos! These paintings are gorgeous and I can't wait to see a lot of them together! So please join us in welcoming Sig and his space paintings at our opening reception Wednesday, March 4th from 5-8pm and be prepared to have your eyes and mind blown away! We'll have complimentary snacks, wine, and other beverages for you to enjoy while you MARVEL at Sig's art and visit with him and other local art lovers!
at March 03, 2015 No comments: