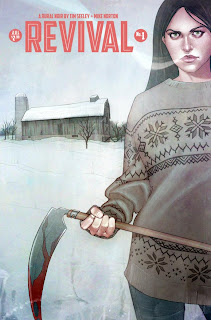 Just finished the first collection of Revival (contains the first five issues), a different kind of zombie story by writer, Tim Seeley and artist, Mike Norton. Revival takes place in a rural part of Wisconsin, where people are coming back to life, only they're not the mindless zombies we know from Romero movies or the Walking Dead. What has caused this is also unknown through the first five issues in this collection. I want to read more Revival and see where this is going, but I'd have to say for me that Revival isn't quite the page turner or experience I get out of Walking Dead. I'll give Revival another volume to "sell" me on whether I want to stick with this title, the fact that I read this right after Neonomicon and Old Man Logan and Rachel Rising earlier, probably didn't do the reading of experience of Revival any favors, so it may just be me as this title has been getting good critical attention.

Well, Neonomicon is even more disturbing than I remembered it being when I read it as it was being serialized a couple of years ago.

Basically, Neonomicon is best described as HP Lovecraft crossed with Silence of the Lambs. Two FBI agents get assigned to a case that involves serial killings that have a connection to the writings of HP Lovecraft. Halfway through, the story and characters (and readers) are taken to some very dark, disturbing places, definitely a very adult creation, but as with Alan Moore and Melinda Gebbie's Lost Girls, one can see Moore's mastery with the written word, characters, and big ideas. economic on isn't going to be for everyone, some may even say that the sex elements within are gratutioutious and horrific and while those would be valid arguments, the way they are presented are very much integral to the overall story. Just don't make Neonomicon the last thing you read or experience before you go to sleep. 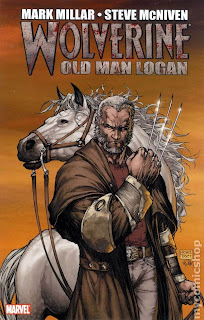 Wolverine Old Man Logan collects issues #66-72, of Wolverine plus Wolverine Old Man Logan Giant-Size, which were originally published from June 2008-September 2009. Written by Mark Millar and drawn by Steve McNiven, this was a story arc that took place in the far future, a future in which horrible things happened that saw the end of all super- heroes and Wolverine did something so horrible that he vowed to never use his claws again.

When I originally read Old Man Logan as it was serialized, I enjoyed it as one of the very few really entertaining Wolverine stories I'd read (the only other good Wolverine story for me besides the Byrne / Claremont X-Men era Wolverine and maybe the Frank Miller Wolverine mini series, was Mark Millar's other epic Wolverine story, Enemy of the State, drawn by John Romita Jr.). Something that happens in the very last chapter really annoyed me though and almost ruined the whole story for me. Re-reading this story though, I was more forgiving when I got to this super suspension of disbelief episode at the end and just went with what Millar and McNiven were doing, which was creating a high octane superhero romp and because it takes place in the future, they could do things that they wouldn't be permitted to do in current continuity. Wolverine Old Man Logan is a book that anyone could read and enjoy (if you enjoy over the top superhero stories with hyper realistic art) without being saddled with a lot of X-Men or Wolverine backstory. 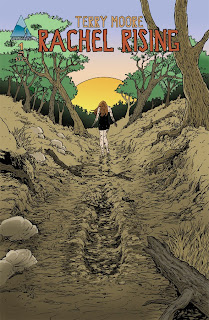 Today, before catching up with this week's comics, I've decided to spend my afternoon revisiting some graphic novel collections of series from the last few years. First up is Rachel Rising, followed by Wolverine Old Man Logan, Neonomicon, and Revival.

Rachel Rising is a series written and drawn by Terry Moore (most celebrated for his Strangers In Paradise series). I've been reading Rachel Rising as it comes out monthly (it hasn't ended yet) and have been enjoying it, but re-reading the first two collections of Rachel Rising, like most re-reads of a series in one sitting, I can see the bigger picture of what Terry Moore is doing with this series.

Rachel Rising starts off the first several issues with a lot of intrigue and it's not until the middle of the second collection where we start to get some answers. If you like thrillers, with a good dose of horror and ultra violence, Rachel Rising is worth checking out. I'd also recommend staying away from reading the back cover descriptions because this is a story that is better experienced as it unfolds without any hint of what's to come. And Terry Moore's art is always good eye candy too. 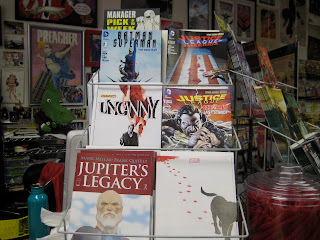 Happy New Comics Wednesday - every New Comics Wednesday is pretty exciting, but this week is like three weeks in one! The sheer amount of great titles out today is mind blowing! Here in these three photos that I took last night, you can see just a small sampling of what awaits those who love sequential art entertainment! 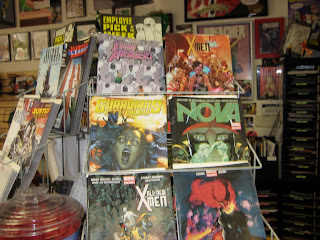 First issue of Batman / Superman was really good, a great DC debut from writer, Greg Pak! Fatale #15 starts a new story arc so it's a great jumping on point for this great crime horror noir series. Greg Rucka and Michael Lark debut their new Image series, Lazarus, today and it thrillerific (and Greg Rucka will be one of the guests at this years Vegas Valley Comic Book Festival, Novemeber 2nd at the Clark County Library, right behind Alternate Reality Comics!)! First issue of Uncanny is out today and there's definitely something different going on here! Second issues of Jupiter's Legacy, The Bounce, and The Wake are out, as is a new issue of Powers, The Massive, Sex, Unwritten, and Mind MGMT! 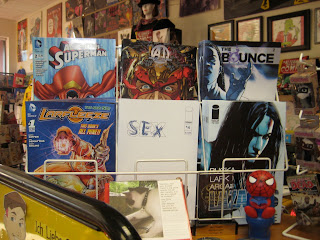 It's also a big Justice League week, with three titles out and big X-Men week, with several of those characters titles out today too. Everyone's favorite Hawkeye and Daredevil see two strong issues released. Other favorites include: Young Avengers, Flash, Nova, Guardians of the Galaxy, FF, Aquamaan and the first issue of Red Lanterns with its new creative team!

I can't say the following enough, but I want to again say thank all of my friends / patrons who shop at Alternate Reality Comics to get their fix!