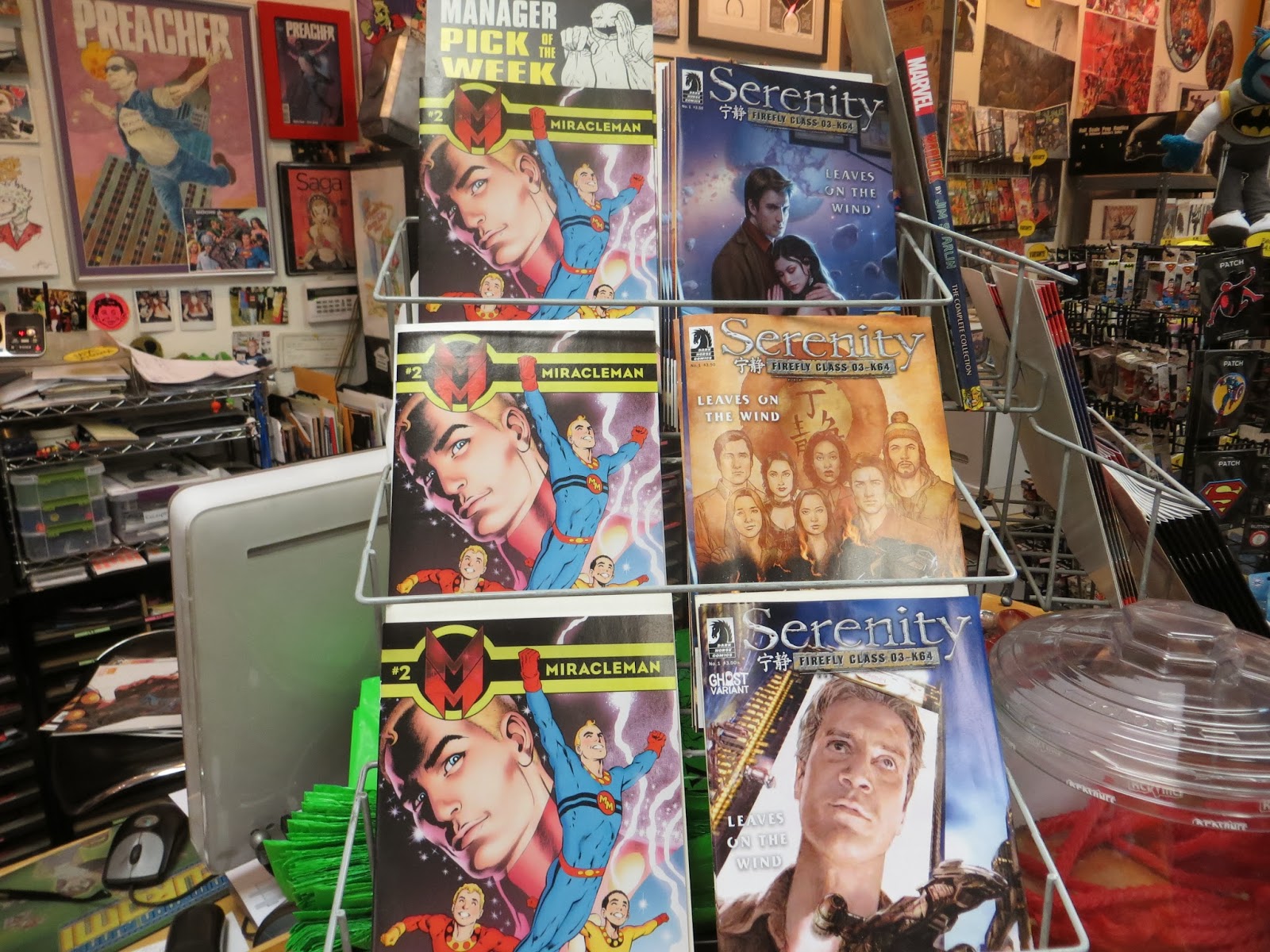 Miracleman issue #2, with this issue you really see how dark Alan Moore takes the Captain Marvel / Shazam roots this character is an homage to (really an all out swipe of Captain Marvel) and we see the early nastiness of Kid Miracleman. Pages 13-22 represent The Yesterday Gambit, a chapter with what Moore was doing with this taking MM to the next level that foreshadows what will be happening in the future of this title. There's some good bits in this chapter, but it's not on the level of greatness of the first 12 pages in this issue. At the time it first appeared in the early 1980s, Moore wrote this to give then regular MM artist a chance to catch up with the main story, so the art in the Yesterday Gambit (which is reprinted in the U.S. for the first time) by Steve Dillon and others is far removed from what Gary Leach was doing, but the first 12 pages here should keep you on the edge of your seat as to what's going to happen in future issues (and it really gets DARK!).

Everyone loved Firefly / Serenity that great short lived television show by Joss Whedon, right? Well today the first issue of Serenity Leaves On The Wind, by Zack Whedon and George Jeanty hits and it picks up right after the show / movie! I'm glad to see the future adventures of these characters and I know fans of the show won't be disappointed! And there's a new character! 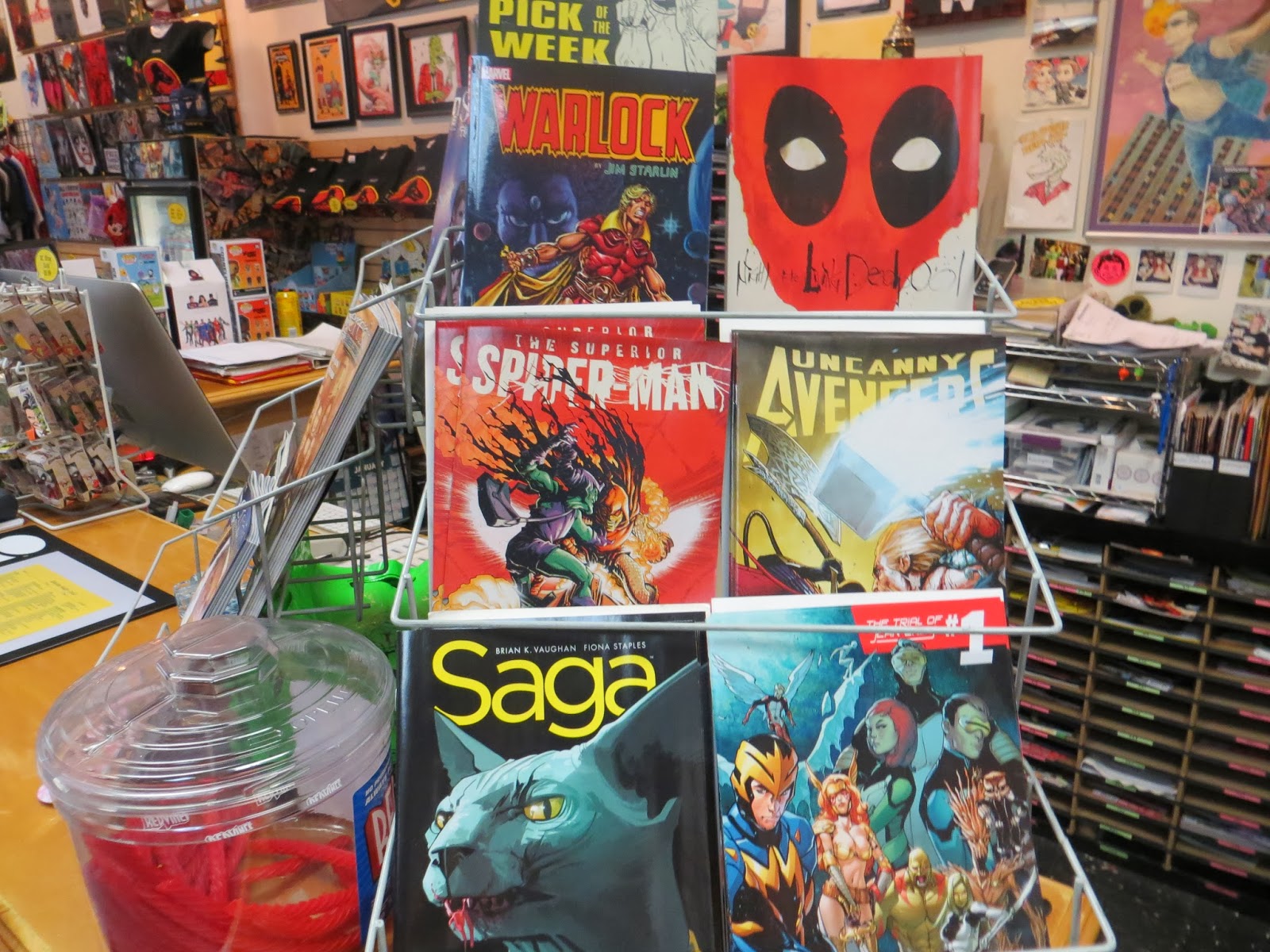 The graphic novel on the top left is the complete Warlock that Jim Starlin did back in the 1970s, this was one of the most cosmic comics I've ever read and I'm happy to see this handsome big volume! Look, kitty (Saga, awesome cover, huh!?)! Also the second chapter of the Trial of Jean Grey is in this week's Guardians of the Galaxy! Night of the Living Deadpool #2 is good zombie fun, written by Cullen Bunn, who will be writing the new upcoming Magneto series! 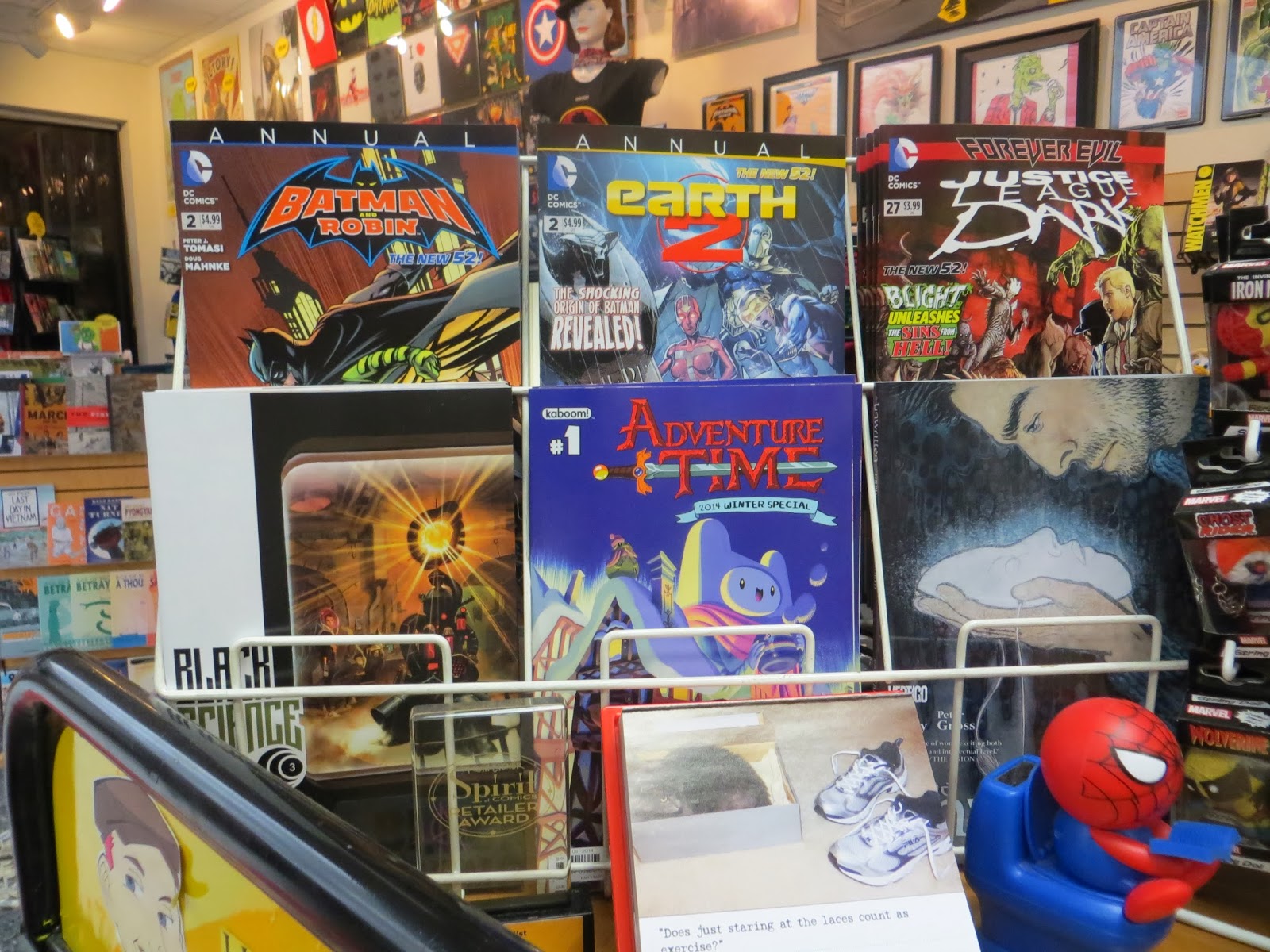 This week is DC Annual week, with World's Finest, Earth Two (featuring the origin of Batman from that Earth), Green Lantern Corps, and Batman and Robin! New issue of Black Science and a new wonderful Unwritten collection!The last issue of Damian Son of Batman is out as is a new, great East of West, and the penultimate issue of Cataclysm featuring what's going to happen to the Ultimate universe are out! I hope you all are excited about these titles, but mostly I hope to see a lot of you and share with you how shiny my floor is (grin) as it got stripped and waxed Sunday night!
at January 29, 2014 No comments:

Leading the pack of comic book excitement today are five comics with the word "dead" in their titles! Walking Dead #120, which really lives up to its story arc title, All Out War, with this issue! Pretty Deadly and the second issue of Dead Body Road, a great revenge story! The man who pretty much started the zombie craze back in 1968 with his movie, The Night of the Living Dead, George Romero, has a new Marvel Max comic out, Empire of the Dead, drawn by Alex Maleev and the first issue is off to a good start! My favorite comic with "dead" in its title is Rick Remender's new title for Image, Deadly Class, beautifully drawn by Wes Craig, featuring assassin action and intrigue (it's the best comic I've ever read by Remender and it's fantastic!)!

James Robinson is now at Marvel with All New Invaders, and this is the best thing I've read from him in a long time (I liked his Earth Two, but it wasn't ever up to the level of his Starman)! And it has great art by Steve Pugh, an artist that I'm usually not on board with, but here with some gorgeous coloring, he really shines! If the following issues are as good as this first issue, this will be one of my most looked forward to titles every month! A few other debuts today are the first issue of the newly launched Unwritten by Mike Cary and Peter Gross, a great jumping on point for an always amazing series! There's a new Judge Dredd mini series, Mega-City Two that looks out of this world, and there's a new Dynamite series called Bad Ass that looks like a lot of fun!

A new issue of Hawkey, featuring Kate! Yes, this is issue #16, as artist David Aja is late with #15, but it'll be worth the wait. I'm sure (yes, they're releasing these issues out of order)! This was SUCH a wonderful issue, self-contained, with a lot of heart, you don't even have to have read any of the other  issues, but you'll want to after reading this one! This title has been regularly late, but I'm glad Marvel is just waiting for the greatness to happen!

The second issues of All New X Factor, Black Widow, Avengers World, and Origin II land today, as well as the last issue of FF! The penultimate issue of Batman Zero Year is out today as well as a great new issue of Batman and Two Face (although as good as this story arc has been, I'm looking forward to it being over as it has been a little long)!

New issue of Justice League, Wonder Woman, Zero (a REALLY good issue!), Avengers, Batman '66, a new Cataclysm X-Men, The Massive, All New X-Men (yes, an issue just came out last week, Marvel is insane with their schedules), Animal Man, and Mind Mgmt are all present too, to make this a week of great, varied comic book thrills and wonderment! Remember to give me ego strokes about how great our redesign of the front of the store looks (grin)!
at January 22, 2014 No comments: 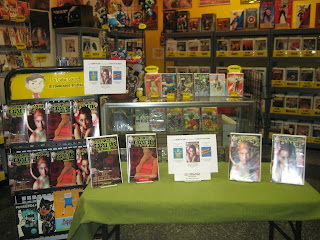 BIG, BIG, BIG Day here today at Alternate Reality Comics, lads and lasses! As I'm sure you all know, we're having A Voice In The Dark creator, Larime Taylor in the store from 10am - 6pm! The third fantastic issue is out today and Larime would love to hear your feedback on the first two issues! We also has a fresh stock of all three issues if you haven't already tried this great new title! I couldn't be happier with this title issue after issue. Larime writes and draws such rich and different characters. A sound bite description I'll leave you with if you don't already know what this book is about: the central character, Zoey, has killed someone and gotten away with it, she's just started college and hosts a radio talk show called A Voice In The Dark and her first show goes to a place no one was expecting. Please come by today and show Larime what a great comic book community Vegas has! 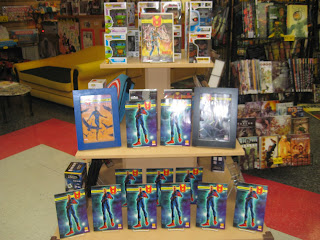 Miracleman!!!! This was a comic Alan Moore wrote in the early 1980s before he wrote Watchmen, but it's really not dated at all. This long out of print comic is basically a "realistic" version of Captain Marvel / Shazam and was one of the first "taking superheroes to the next level" comics. This series had many fine artists working with Alan Moore, with the first few issues being by Gary Leach. The new colors are amazing and I can't wait to talk to people about what they thought about this comic after they've read it! 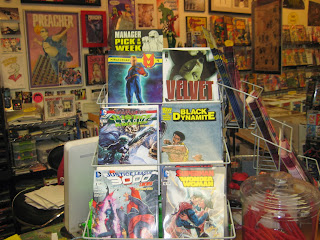 SO many good comics today! Velvet, by Brubaker and Epting on its third issue keeps hitting on all fronts! Black Dynamite was a lot of fun, can't wait for the next issue of this! Superman and Wonder Woman is shaping up to be one of the better Superman and Wonder Woman comics in some time in my opinion! Red Rover Charlie by Garth Ennis and artist Michael Dipascle is a great end of the world scenario told from dogs and cats perspectives and is one of my favorite Ennis written comics in some time! 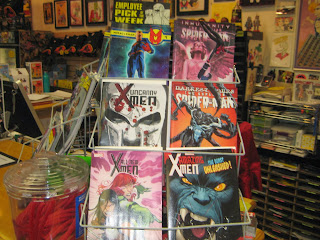 Inhumanity Spider-Man is a good Spider-Man self-contained story by Chris Gage with some amazing art by Stepanie Hans and the beginnings of some big changes are afoot in Superior Spider-Man! The penultimate issue of Daredevil before the character moves to San Francisco (it'll have the same great creative team) has a last page that makes you really want to read the next issue right now! Lot os X titles out today too, including Uncanny X Force (not in this photo)! 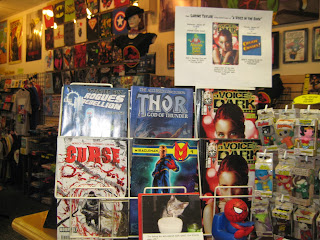 The third issue of Jonathan Luna and Sarah Vaughn's Alex + Ada, about a young man who is given a beautiful android from his grandmother is out today and this is becoming another one of my favorite Luna titles - very well thought out! The conclusion of The Accursed in this week's Thor and the last issue of Fantastic Four before James Robinson and Leonard Kirk take on this team book! Nova, Batgirl (a Gothtopia chapter), Nightwing, Astro City, and another Cataclysm chapter are a few of the other titles awaiting you!

As if that's not enough excitement, from 4-6pm Harry Simon and myself are having a tofu versus bacon battle at the store, so if you've never tried tofu and want to, I think you'll be surprised, especially one of the yums my wife, Kate, has made with tofu! Larime will also do a sketch for anyone on the back cover of his book (there's a little sketch box just for that) for only $5.00, so come on down, get some great new comics, try some tofu (and there'll be some bacon stuff - grin!), and give some ego strokes to a creator you're going to hear a lot more from in the months to come, Larime Taylor!

Happy New Comics WEDNESDAY - 1st of the 2014 edition (collect them all)! 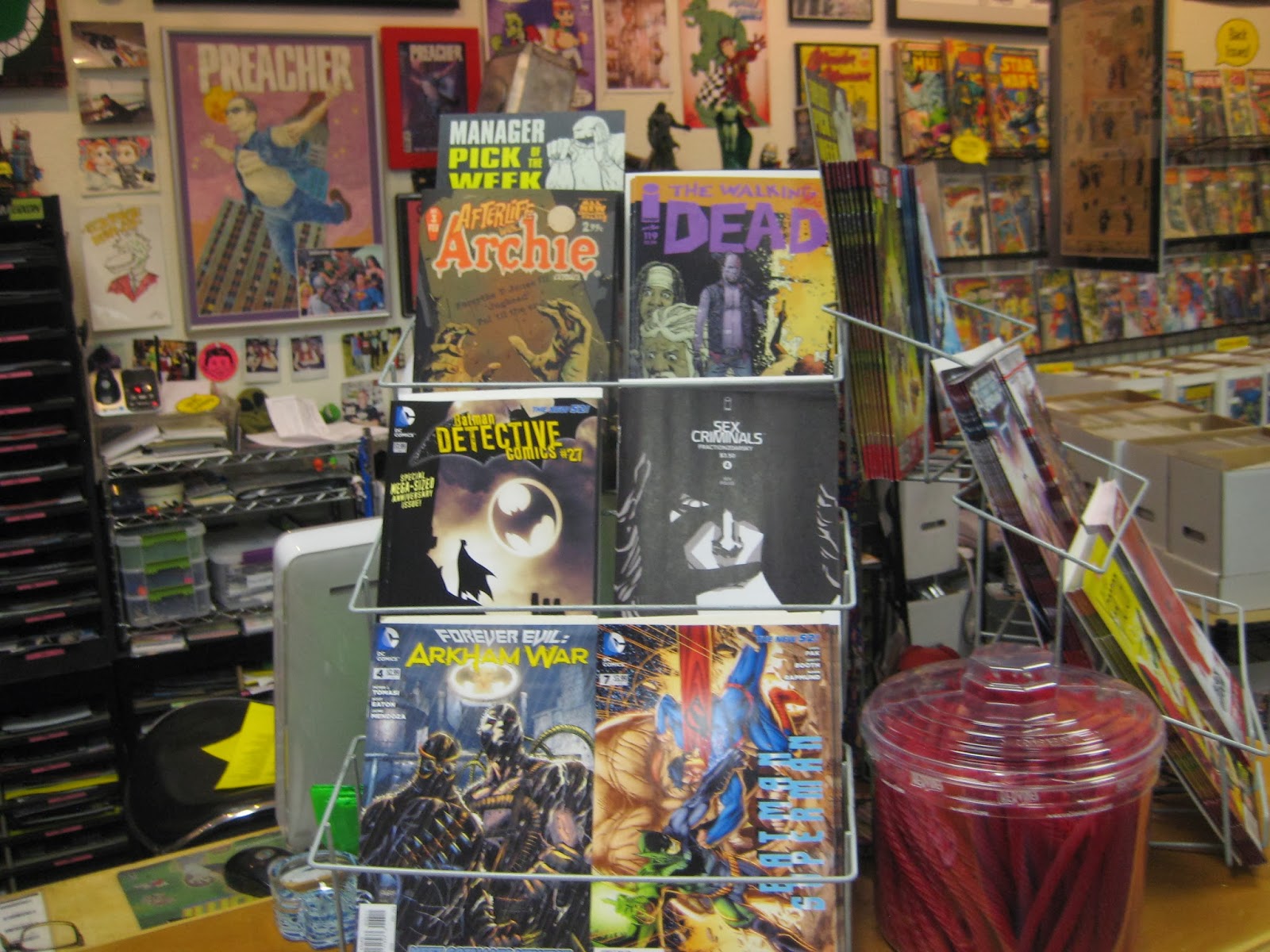 Okay, about a week ago I was lead to believe that this was the week that Marvel was going to be releasing a thousand of their new titles, but actually there's just a few new Marvel titles out (goes to show you that you shouldn't believe what you read on the internet - unless I write it - grin!). One of their big release that I thought would get buried is their one shot new short story collection, Marvel Now Point One, which features several great new stories by the creative teams that will be doing the respective titles featured in this comic. My favorites were the Slott & Allred Silver Surfer story and the new Ms. Marvel by G. Willow Wilson & Adrian Alphona (that one really surprised me with how good and different it was!). There's also a cool Loki framing story by Al Ewing & Lee Garbett!

Afterlife With Archie #3 is SOOOOOO good, this is just getting better from a strong first issue. A great Michonne moment in this week's Walking Dead! Sex Criminals - haven't read it yet, but it's next on my stack! 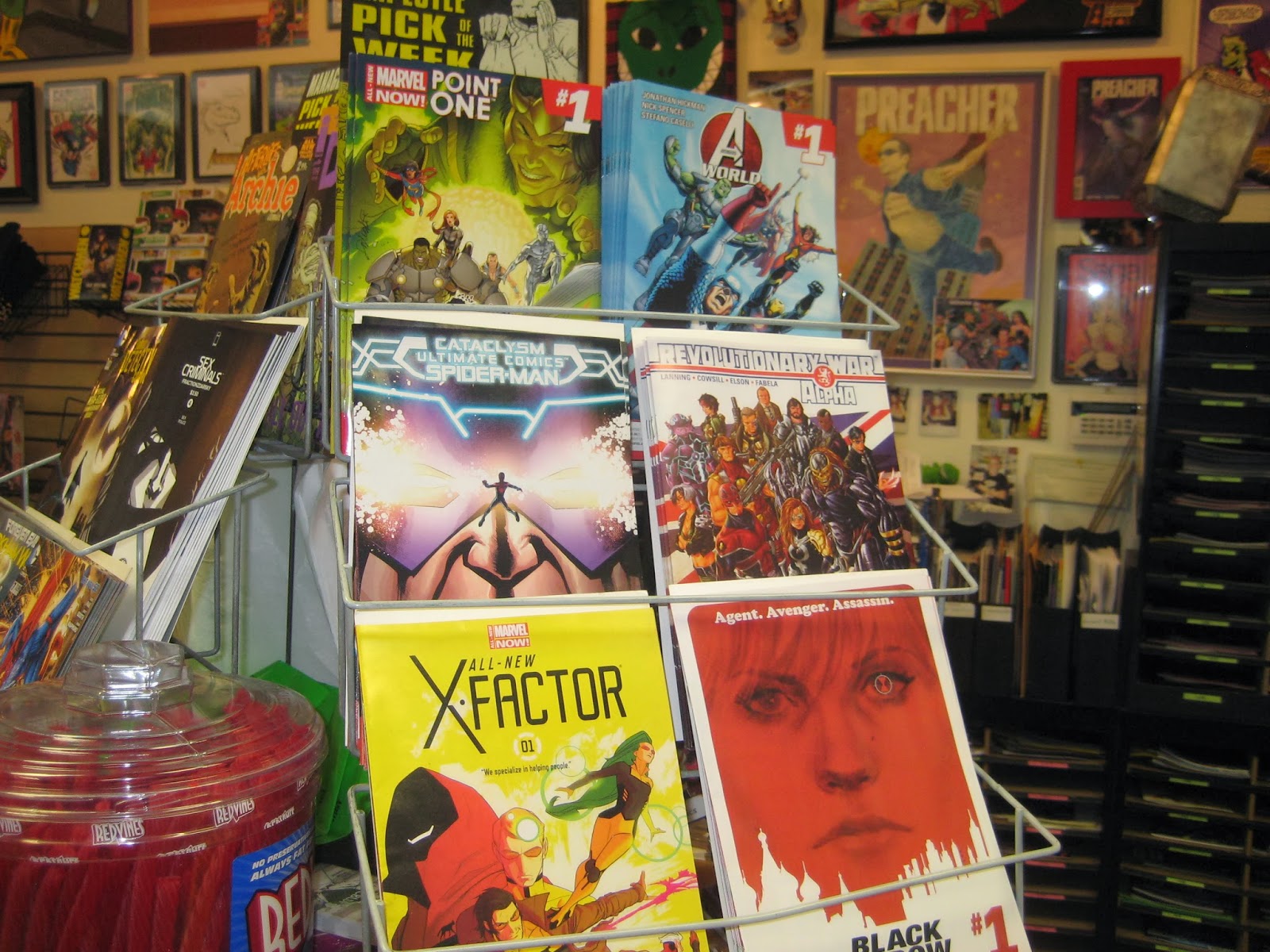 Here's some of this week's new Marvel series: Avengers World, Black  Widow, All New X Factor, and Revolutionary War! Also two issue of Galactus getting his hunger on are out this week! 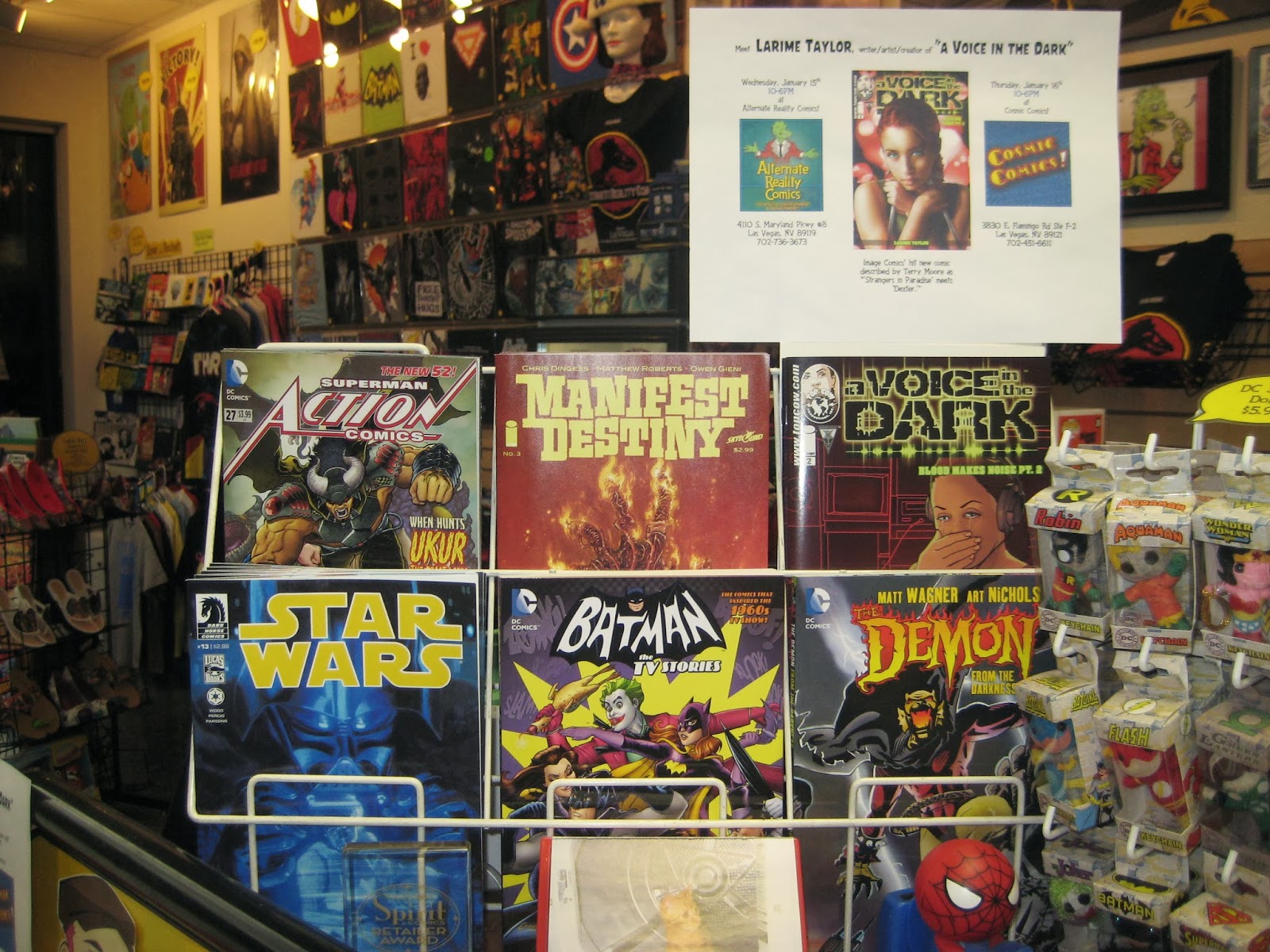 The Matt Wagner Demon trade is back in print! Fatale is also out, as is Marvel Knights Spider-Man, Fairest, and Star Wars!

No, that's not a new issue of the great new Image series A Voice In The Dark, but issue three will be out next Wednesday, and we'll have the creator, Larime Taylor out all day (from 10-6pm, Wednesday, Jan. 15th) to talk about his comic, tell you how he produces it, sketch for you (he'll have a special sketch cover with him), and basically answer any question you have for him (ego strokes are always appreciated also!)!  Hope to see a lot of my fellow sequential art lovers today, but especially next Wednesday!
at January 08, 2014 No comments: