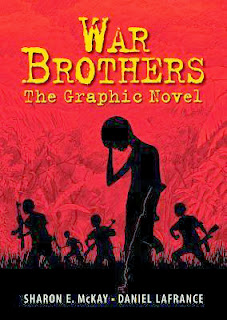 War Brothers is a new graphic novel written by Sharon E. McKay, from her novel about child soldiers in Africa and drawn by Daniel Lafrance. While War Brothers is fictional, it is based on real events happening in Uganda and elsewhere around the world (sadly). 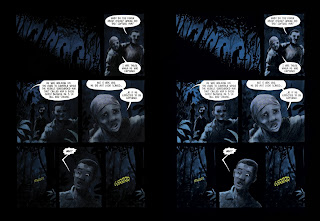 Everyone probably remembers the name Kony, from 2012, as his name was all over social medium platforms as the horrible leader of abducted child soldiers. The children central characters of War Brothers are abducted by Kony's soldiers from their school (which was protected, but they were overwhelmed) and forced to become soldiers for Kony's Lond's Resistance Army, really just a a more self important name than what Kony really is, a thug of the vilest order. While the children abducted in this story have to make some horrible choices to stay alive, like their real life counterparts, War Brothers is also a story of hope and courage in the face of evil, and shows that even if a child emerges from this nightmare, they still have a difficult road in front of them.

Reading War Brothers is difficult, put it should be read and is definitely one of the most powerful graphic novels of 2013. Here's a little video which uses art from the book to give you a better idea of War Brothers: http://vimeo.com/60125256
at November 10, 2013