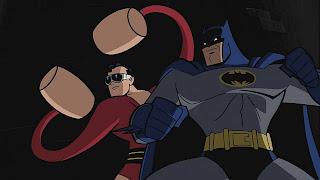 Tonight on Cartoon Network at 8pm the first episode of Batman: Brave and the Bold airs so set your dvr, tvo, or whatever recording device you use. If the animation looks like the screen capture I have accompanying this entry, than it looks to be good. I've liked all of the Batman animated series except for the last one titled The Batman, as I really disliked the design of the characters and I thought they cut way too many corners with that series' animation (not that I could even watch a whole episode of that series). Tonight's episode features Batman and the new Blue Beetle (who's an Hispanic teen-ager), with next week's episode featuring Batman and Green Arrow, and the week after will have Batman with Aquaman (so I'm guessing that Plastic Man as featured in the picture above will appear later, unless and episode features two other characters besides Batman).

For the second Watchmen trailer, click here: http://pwbeat.publishersweekly.com/blog/You'll have to scroll down a bit. The music in the first part of this trailer is by the amazing Phillip Glass and the music in the latter half is by Muse.
at November 14, 2008