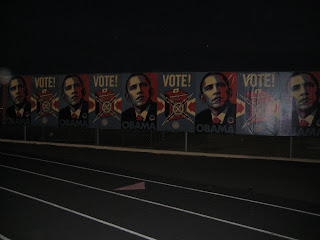 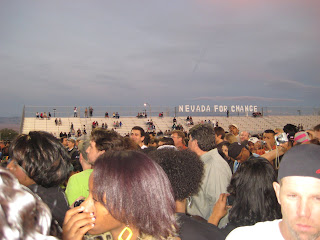 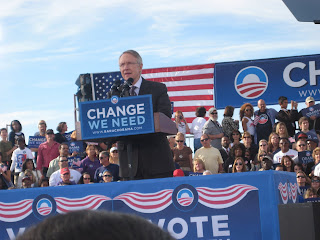 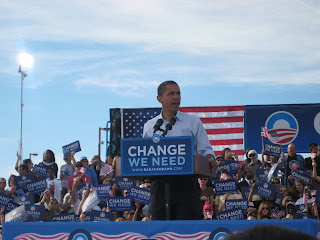 First photo: This is the race track at Coronado High School in Henderson, Nevada, where Barack Obama appeared here in Vegas (well technically Henderson, but same difference) this morning for the 20th time since he announced his campaign for the White House. The gates opened about 6:30am and Obama arrived at 9:30am.

Second photo: In the background here you can see in big letters: "Nevada For Change" (click on photo to make the image larger). There was 15,000 people at this rally and seriously the passion for Obama as our next President is so inspiring amongst all classes, ethnicities, and age, that it's hard not to get the chills being in its presence. And I don't think this is just a case of "cult of personality", rather people really do believe that he is the engine that will drive true change and feel compelled to help make his Presidency happen.

Third photo: Nevada Democratic Senator and United States Senate Majority leader, Harry Reid, was at the rally to introduce Obama. Anyone who knows even a little bit about politics knows that Harry Reid is a get things done politician who has a very high level of respect in Washington D.C. as well as Nevada.

Through some very lucky circumstances, I was only about 15 feet from Obama at the event (the same distance I had seeing Michelle Obama this past Monday) and although the wait was long for the main event to start (as I mentioned in my Michelle Obama entry earlier this week), time goes by pretty fast with all of the excitement and history in the making that the audience is feeling and creating. Following is a bad analogy, but really, the difference in hearing Obama talk live in person even when you've heard him speak on tv and know his platforms, is like the difference in attending a really great live concert even though you've already got the cd or heard the songs on the radio - live is better and will impart upon those attending a renewed energy.

Getting back to my car after the rally I saw a great bumpersticker that read: "01/02/09 The End Of An Error." Or as a customer of mine, Al, said a couple of weeks ago to me when we were talking politics, "Now I can be on the road to stop hating my government." - (Actually those weren't his exact words, but that was the intended sentiment regarding what he said, a sentiment I share as I'm sure most everyone unhappy with the past eight years of the Bush / Cheney farce shares).
at November 01, 2008

Man, you lucky dog!
Here's a link to a strange video someone made of our protest. Unfortunately, I'm not in it. At the beginning of the video, he mentions losing some flyers. They were volunteer sheets and I was one of the people running after them :( The wind was pretty awful.
http://www.youtube.com/watch?v=1D8sa0oU9Us&feature=related

Wow, Ralph you really were close! I was in the bleachers just starting to fill up in your second photo. I had a pretty good vantage point. Even though I wasn't close up, it was still pretty inspiring.

Jennifer, sorry I didn't get to hang with you at the rally, but I had to be a "snob" and watch it from 15 feet away. I'm glad it was still an amazing experience for you.

I'll look for you at the Neil Gaiman presentation this Thursday!