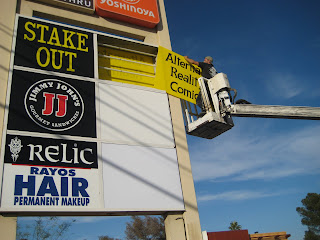 So I finally got around to changing my store sign on the pylon sign tower that is in my strip mall center. I wished I had taken a picture of my old sign just to show what a dramatic improvement my new one is. 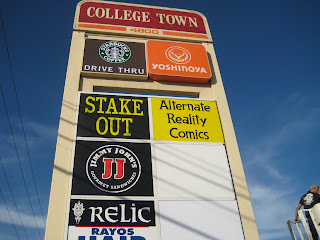 My old sign had white letters on a red background with a lettering font that I thought was cool and distinctive, but actually was hard to read. 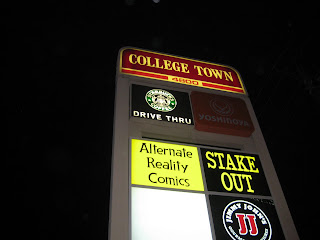 The lettering font that I used for my new sign (and for almost everything I do that involves signs for the store) is a font called ccgthingamjig that I bought from ComicCraft (a company that sells licensed fonts) and is of course the same lettering for the classic Fantastic Four comic from Marvel. I originally chose black letters on a yellow background because I thought it would make an interesting inverse contrast to the sign next to mine on the pylon (The Stakeout, a bar a couple of doors next to my store), but I've always liked yellow and think it really pops out. 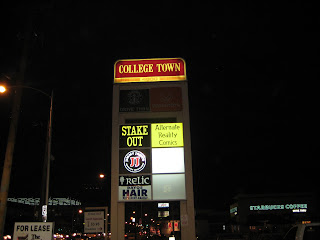 As you can see from these photos of my new sign, there's still a few empty spaces on this pylon sign (and there are a couple for businesses like Relic that don't exist) so if you can think of a cool, exciting business that isn't already represented in the immediate UNLV area, I'd love to have some new neighbors!
at November 25, 2008

Looks great, Ralph. I need to come down sometime soon. I miss living on the Parkway sometimes!

Hence, this mortgage loan possesses lots of attractive characteristics in it like Only when looking through its statements would they learn that regular installments for Payment protection insurance were being applied for