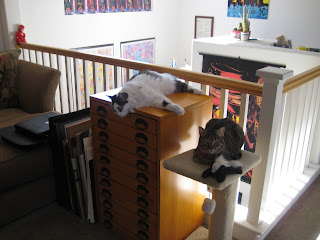 After three and a half months, it looks like our new kitties, Pixie and Moto (Moto's the grey one), have come to accept that we aren't just fattening them up to eventually eat them, and they've now joined Alacard (our black cat) in bossing us around. 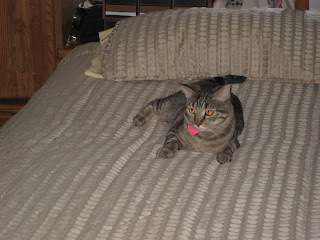 Moto, doing her best to blend into our bed. 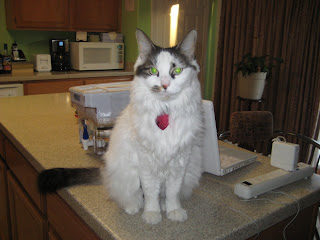 Pixie, with her kryptonite eyes, trying to make us give her more wet food (cats have really small brains so she doesn't realize that kryptonite eyes can't make a person do something). 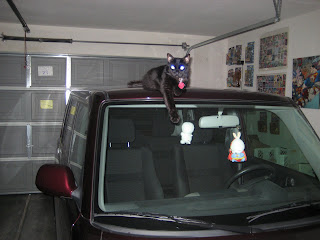 Alucard, chilling in the garage, which is his version of going outside.

I thought it would take longer for the two new cats, Pixie and Moto, to adjust to us and their new surroundings, but now they roam everywhere and all three cats even get along as well as cats can.
at November 15, 2008

I like that the kitties have taken over everything, the bed, the kitchen, even the car. Better be careful. Next thing you know they'll take over the remote and leave rings on the coffee table because they're too lazy to put down coasters when they drink your beer.

Kate often thanks the Egyptians for discovering / domesticicing felines.

I remember a long time ago, our white cat (who sadly died this past March), Maleficent, watched a good amount of Stuart Little. I've actually not seen all of Stuart Little, but one night I was flipping channels on the television and that was on and I left it on just fascinated that my cat would watch it for as long as she did. I only noticed Alucard watching the television very very briefly a couple of times when he'd see a bird or another animal, but his attention was quickly diverted and he wouldn't fixate on the screen like Maleficent did watching Stuart Little.